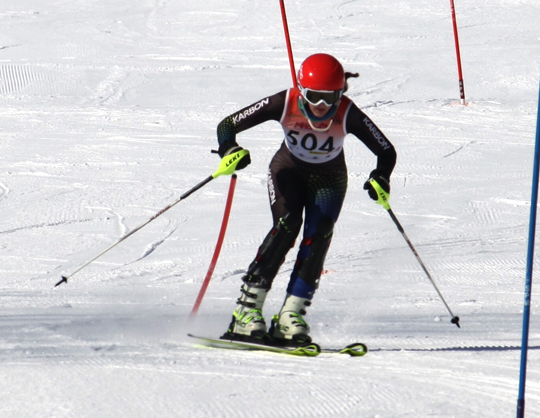 Now they have an MHSAA Finals championship trophy to place along side it, continuing a string of firsts.

The Rangers placed three skiers in the top 10 of the giant slalom and two in the slalom to edge Pontiac Notre Dame Prep 105-108.5 at Boyne Highlands Resort on Monday.

Sydney Reynolds added some personal hardware as well by winning the giant slalom — two years after winning a slalom title — with a time of 1:00.73.

“We won Regionals, and that is the first time it’s happened in the history of FHC,” Reynolds said. “Coming in we knew we had a good shot, so we just tried to finish. We came out on top, and it was amazing.”

Reynolds said taking the team trophy on the podium from head coach Alan Moore was unlike anything the senior had ever experienced.

“Being a senior, knowing we went off on that is amazing,” she said. “Hopefully they are able to do it again next year. They have a good chance, and knowing they can do it will make it even better.”

Moore has been coaching the Rangers for 26 years and said his athletes have kept him going for so long. Now he’ll have a championship to defend, too.

“We were still in the hunt. One skier fell and cost a few points,” Moore said. “We were (third) place, but not too far out of it. It was a pretty tight race, and we have pretty strong GS skiers. We held on for dear life, and it worked out.”

Sandwiched between the top two Forest Hills Central skiers was Houghton-Hancock’s Jenna Stein, who won the individual slalom championship, eclipsing long-time friend Reynolds by fewer than four-tenths of a second.

Monday marked the fourth season Stein has competed at the MHSAA Finals, but it was the first time she has completed all four runs without a fall.

“Really proud. Really proud,” Notre Dame Prep coach John Deibel said of his team. “They earned the right to be here. We were a pretty good team.”

Deibel had one of his top skiers post a DNF in each discipline, but the team was able to pull together for a runner-up finish anyway.

“It’s amazing. We’re such a close-knit team,” Deibel said. “Our girls come together. Our girls hug each, maybe they cry a little bit and get over (a fall) really quick.

“We expect to lose a skier. That’s the way we play our game.”

Lintol was Notre Dame Prep’s top finisher on the day, but Deibel said the Fighting Irish have a number of leaders, including some who will return next season looking to keep the program among Michigan’s best.

“I have four or five other kids on the team that are absolutely as good as Lintol is, and I fully expect they all will be competing next year for these same trophies.”

“We feel blessed to come here and work hard,” Lintol said. “We put all these hours in and all the seasons we’ve had as a group. We’ve grown up together. To see everybody improve and get to this point, and see not only team growth but self growth, is really exciting.”