Plane that took off from Ontonagon still missing 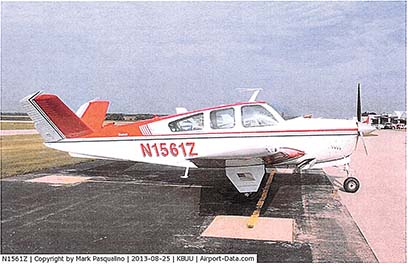 Photo provided to the Daily Mining Gazette An image of the plane flown from Ontonagon County Airport that went missing Sunday evening somewhere near Lake Michigan.

BENZIE COUNTY, Mich. — The search continues for a plane that went missing in Northern Michigan after taking off from Ontonagon Sunday.

About 7:50 p.m. Sunday, the Benzie County Sheriff’s Office received a call from Minneapolis air controllers saying they were in contact with a pilot whose engine equipment had seized, said Sheriff Ted Schendel.

The controller diverted the plane from its intended destination of Monroe to Frankfort, about 150 miles north on the shores of Lake Michigan. It never made it. Flight records show the plane heading southeast towards Monroe before turning due east towards Frankfort. The flight path ends several miles from shore.

Helicopters from the U.S. Coast Guard Air Stations Detroit and Traverse City conducted helicopter searches of the water Sunday night into Monday morning. After pilots exhausted their time limit, the helicopters were grounded.

“We’re still continuing to search … it’s like a needle in a haystack, especially in a lake,” Schendel said. “We haven’t found any floating debris.”

A pilot and passenger were on board the plane, a light red Beechcraft 35 Bonanza with tail number N1561Z, Schendel said. The aircraft’s three-year certificate had expired at the end of February, according to the Federal Aviation Administration website.

The plane is registered to Evergreen Exploration, based in Howell, Michigan.

Benzie County did not identify the hometowns of the pilot or passenger. The Ontonagon County Sheriff’s Office declined comment, citing the ongoing investigation.