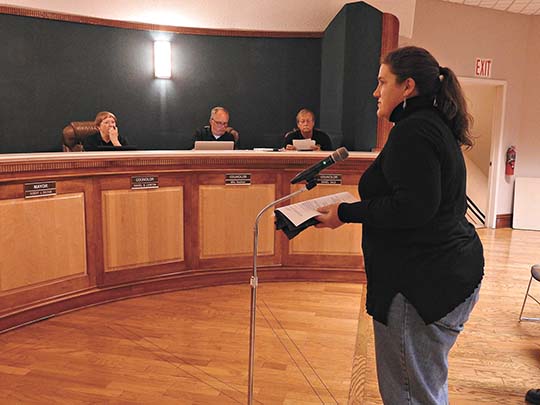 Garrett Neese/Daily Mining Gazette Audrey Mayer of Houghton addresses the City Council Wednesday during a hearing on revisions to its rental ordinance. The city unanimously approved the changes, which include dissolving the Rental Housing Board and ending automatic transfer of a license when a property is sold.

The Rental Housing Board, which previously voted on rental license requests, will be eliminated. If the owner and rental property meet the ordinance requirements, the zoning administrator can grant the license request.

Houghton was alone among other regional communities in having a Rental Housing Board approve licenses, the Planning Commission subcommittee found.

Property owners who disagree with the zoning administrator’s decision will be able to plead their case to a new Rental Housing Board of Appeals. They will have 20 days to file an appeal.

“Previously there was no right of appeal,” City Manager Eric Waara said. “If a license was denied or never got to the Rental Housing Board, there was no way to appeal that.”

If the property is sold, licenses will no longer automatically transfer to the new owner.

The change is intended to incentivize parking upgrades at older rental properties that do not have adequate hard-surface parking. It is also intended to encourage landlords to bring their properties up to International Property Maintenance Code standards before selling.

That does not cover the number of parking spots, which falls under a different chapter of the city code, Waara said.

“If those were a non-conforming use prior to the ordinance coming into effect … that’s grandfathered,” he said.

It also does not change occupancy limits, which are set by the zoning ordinance.

For the first time, it also provides conditions for a license to be revoked. That came as welcome news to resident Audrey Mayer, who provided photos of the house next to hers on South Avenue to the council Wednesday. She wanted a provision added so that neighbors could request an inspection.

“If the outside of the house looks that bad, if the students are asking me to come into this house, there needs to be some sort of mechanism for homeowners to say, ‘That house needs to be inspected,'” she said.

Waara said he is not familiar with the property, but that rentals are inspected every year.

The revisions also reorganize the rental ordinance for more clarity and add a section spelling out its intent.

Because the city will not need to hold a Rental Housing Board meeting, processing fees would also drop from $750 to $350.

The council also postponed acting on an amendment to its solid waste ordinance. Among other changes, the new ordinance would specify dumpsters must be emptied at least every 14 days.

Gretchen Janssen, a Houghton resident and local realtor, had dual perspectives. As a resident, she liked seeing more oversight, and hoped it would lead to fewer rentals. Speaking as a realtor, she said the non-transferability of licenses could reduce property value.

“We need to know how to address this change in our purchase agreements,” she said.

Buyers will be able to apply for licenses 30 days prior to the sale closing, Waara said. If a property complies with the regulations, the license process should only take a few days, he said.

Resident Craig Waddell of First Street asked if zoning changes to a property revert to the original state when sold. Waara said the property has to conform to the zoning that was in place when it first got the rental license.

“If someone were to sell a house with a license for four (occupants) and it’s had an outstanding license for four years, that stays because that is a non-conforming use that has to be grandfathered,” he said.