Plans for Eagle Harbor State Harbor to be discussed soon 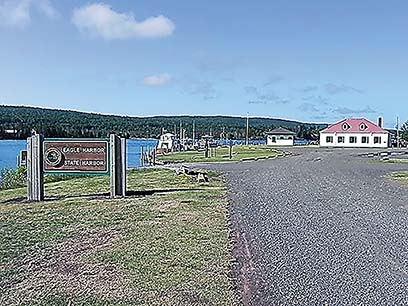 Michigan Department of Natural Resources — Eagle Harbor State Harbor will be the topic of a DNR open house on Aug. 21, at which will be discussed three development concepts determined by a feasibility study conducted last year.

EAGLE HARBOR — An open house is scheduled for Wednesday, Aug. 21, at the Eagle Harbor Community Center from 6 – 7:30 p.m., the Department of Natural Resources announced in a release last Friday.

The purpose of the open house is to showcase three development concepts being considered to replace the aging infrastructure at the state harbor there, the release states. The release offered no details of the concepts.

John Pepin, DNR media contact, said in a telephone interview that the three concepts will posted online on Friday, Aug. 16, for public viewing and consideration before the Wednesday meeting.

“I think they’re still in the final stages of preparing those,” he said.

Beyond that, he could offer no further details.

Unit Supervisor for Fort Wilkins Historic State Park and Eagle Harbor State Harbor, Bill Wild is quoted in the release as encouraging boaters, day users, and the community, to participate, along with the general public, in the open house session, to “help shape future development of the harbor.”

At this session,” Wild is quoted as saying, “participants will be able to learn more about each of the potential development concepts and offer input to the planning process.”

The Eagle Harbor Upgrade Feasibility Study report was released in November, 2018, which stated the study’s findings, among which was that the health department recommended a new, raised drain field. The study also found that only 20A straight-bladed receptacles are offered along the seawall for shore power, which are inadequate, and must be replaced and upgraded.

The boater services building, and other facility improvements, made in 1967, were built before the most current 2019 ADA (Americans with Disabilities Act) standards, and must be upgraded. Bathrooms, showers, and other amenities of the facility were also found to be non-compliant. These are a few of the results of the study.

The study report can be found at the URL: www.michigan.gov/documents/dnr/EagleHarborFeasibility_662839_7.pdf?utm_campaign=Eagle+Harbor+Public+Meeting.

On Friday, Aug. 16, three proposed design concepts for the harbor upgrade will be posted at Michigan.gov/DNRPublicInput. After this date, those who are unable to attend the public open house but would like to review the plans and contribute comments, can visit this same webpage or the Fort Wilkins Historic State Park headquarters in Copper Harbor.

The cost to develop the study of development options was approximately $95,000, funded by the state’s Waterways Program Fund, the press release stated.