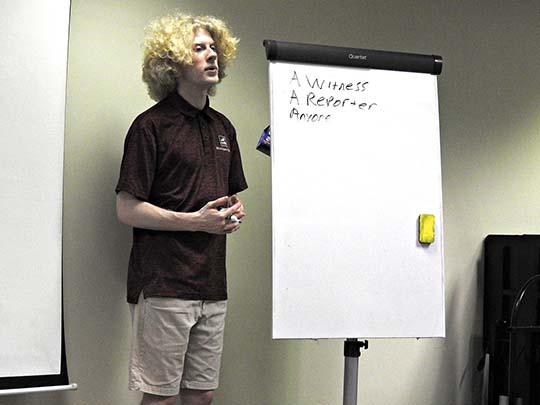 HOUGHTON — In many cases of assault or harassment, there are people who could have done something to intervene, or done more. Getting people to understand the importance of speaking up or acting was the subject of a seminar by Michigan Tech’s Title IX program Thursday. The presentation on bystander engagement was part of its HuskyLead series.

Students Taylor Johnston and Zachary Smith led the hour-long presentation. It was open to the campus community.

“We want to reach as many people as possible,” Johnston said.

To demonstrate what not to do, they looked at a real-life scenario: a 1980s sexual assault at a University of New Hampshire dorm. The three male perpetrators had brought an inebriated female student back up to their room, assaulted her, then bragged about it it to people in the hallway. Two of the girl’s friends overheard them and got their resident advisor.

The RA went to the room, where he saw the three men assaulting the victim, who was passed out.

“He tells them what they’re doing could be construed as rape, and goes back to his room,” Smith said.

Two of the three assailants pleaded guilty to misdemeanor sexual assault. The victim, who no longer felt comfortable living there, transferred to another university.

Which of the bystanders had a negative impact? All of them, attendees said — people at the dorm’s front desk, other students who saw them in the lobby, students in the hallway who did not make sure the victim was safe afterwards.

They all could have done more, Smith said. But of any bystander, the RA was the most culpable.

“The RA in particular not only didn’t seem to care when someone brought up the concern, but saw what was happening and just told them ‘You probably shouldn’t do that,’ and went back on their way,” he said. “That’s the kind of bystander behavior we don’t want to see, and are trying to get rid of.”

Johnston showed a diagram outlining the best ways to get involved. The safest way is from a distance, with others.

“If you’re alone, try to engage,” she said. “If you’re close up, try to distance yourself before you engage so you’re safe as well.”

By acting, they said, people can break down the societal norms that created the conditions for abusers to operate.

Some people may stay away for fear of misinterpreting an innocent situation. But the benefits of intervening outweigh the risks, Smith said.

“If I go over and it turns out there was nothing wrong, what actually happens to me?” he said. “I’m a little embarrassed, but I walk away.”

Private reporting options include Title IX coordinator Kirsti Arko at titleix@mtu.edu or 487-3310, or Tech public Safety and Police Services at 487-2216. Information will be restricted on a need to be basis and the complaints will be investigated. In confidential reporting options, such as Dial Help or the Barbra Kettle Gundlach Shelter, the organizations will not share the victim’s personal information unless there is a significant fear of their safety or the safety of others.