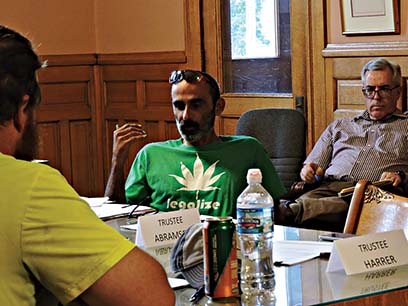 CALUMET — The topic of creating a truck route around Calumet Village was brought up at last Tuesday’s regular monthly Village Council meeting, when a village resident voiced his complaints on several issues, including trucks in the village.

“Also, I’d like to know about the trucks and their jake brakes,” the resident, whose name was not recorded, said. “I understand they’re doing work out here, but I’ve driven trucks, I’m now retired, all my adult life. There’s no sense. You don’t (jake brake) around here. A jake brake is used to slow the engine down.”

His comments were in reference to construction vehicles working on the Elm Street project.

“Is there any enforcement on truck routes in this town?” the resident then asked. “When they use Sixth Street, and these trucks bust it all up, their trucks should go down (U.S.) 41, (M-)206, and …, and you guys are the ones who will have to enforce it.”

Village President Dave Geisler suggested the Street Department could look into establishing such a truck route, as none currently exists.

Trustee Nathan Anderson said there is absolutely no enforcement of a truck route.

“I’ll personally make the motion right now, so we can talk about it,” said Anderson. “We talked about this once before.”

His further response was cut off by the resident, and neither could be heard.

“The truck route is a good idea, because large trucks break up the streets in the village,” Anderson said later in a telephone interview, “especially logging trucks.”

It is unclear whether the motion was seconded or carried, because the resident continued to speak over the council.