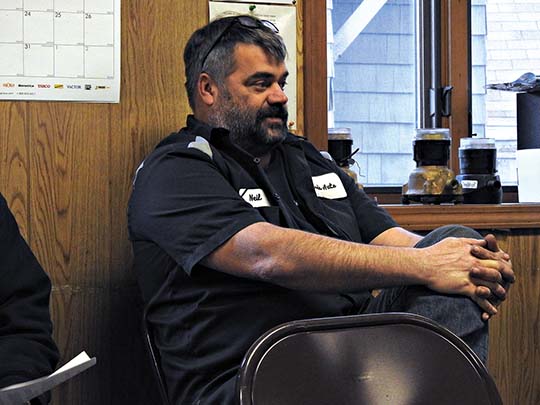 (Garrett Neese/Daily Mining Gazette) Neil Marietta talks to the Lake Linden Village Council about holding an International Watercross Association competition at its Thursday meeting. The council gave permission for the event, which will take place in late August or early September.

LAKE LINDEN — Watercross snowmobile races will be coming to Lake Linden next year.

The Village Council gave permission for an event at the Lake Linden campground in late August or early September at its meeting Thursday night.

The International Watercross Association (IWA) competition will raise funds for the village fire department, said organizer Neil Marietta, whose son James is a member of the department.

The IWA has done summertime races for 43 years, Marietta said. Races had previously been held in Baraga before shutting down in the early 2000s, he said.

“It’s actually bigger now than it’s ever been,” Marietta said.

For the World Championships in Grantsburg, Wisconsin, it holds a $35,000 fireworks display on the Saturday night of the competition, along with bands. Profits form that go to support athletic programs at the local high school, he said.

“As far as I’m concerned, the only reason that I want this race to come to town is for our own benefit,” he said. “I think the Lake Linden Fire Department should be the people who are hosting it, taking the profits.”

The IWA brings in its own insurance, and runs the event, Marietta said. The IWA would bring in materials such as bleachers and pontoon boats with winches to retrieve snowmobiles.

The fire department would still provide support in the form of collecting money from the gate, crowd control and beer sales.

Racers would reserve campground spots weeks in advance, Marietta said. They will also need additional camping past the campground sites.

The course uses about 1 acre of water, Neil Marietta said. The Coast Guard will come down during the weekend and keep boats and water spectators a safe distance from the competitors.

Spectators and racers will be charged $30 for the weekend or $15 for the day.

Neil Marietta expects crowds to be above the 400 it averaged in Baraga.

“If it’s all a go, we’ll make it an annual thing,” James Marietta said. “Because the sport has taken off the last couple years and it’s growing.”

Clerk Bob Poirier said he did not anticipate the event conflicting with any Environmental Protection Agency work at the beach, but said he would check with the Midwest office.

Council members voted unanimously in favor of the proposal.

“It sounds like a plus for the village,” said President Glenn Schuldt.