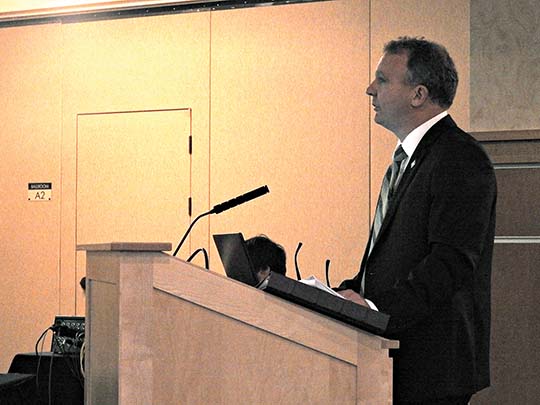 HOUGHTON — Despite regional trends of declining enrollment, Michigan Tech posted a 4.2% increase in its incoming class versus 2018.

The university is hoping to expand on that trend, forecasting increases of 5% for each of the next six classes, said John Lehman, vice president for university relations and enrollment at Tech.

Lehman reported to the Tech Board of Trustees Friday on Tech’s strategies for finding and attracting those students.

“Swimming against the current is going to be a challenge here,” he said. “But we’ve got an idea.”

The university launched an aggressive digital marketing campaign, including daily ad buys on social media, YouTube, Instagram and other sites. The buyer, who Lehman likened to a day trader, looks at various demographic and geographic traits.

The ads generated more than 40,000 unique visitors to Tech’s branded Tomorrow Needs website, exceeding the 25,000 goal. He also beat the goal of 10,000 post reactions to the campaign.

Tech’s Center for Pre-College Outreach is also looking at ways to link higher education, K-12, economic development and community development programs. One such program is Redesign Your Life, which had been name-checked in a recent David Brooks column in the New York Times, Lehman said.

In what Lehman called a standard practice, the university has also launched a campaign buying names from standardized test agencies and other outfits based on Tech’s enrollment profile. Last year, Tech bought 50,000 senior names and 80,000 junior and sophomore names. This year, that increased to 50,000 seniors and 200,000 younger students.

Michigan is the primary area for the buys, with secondary markets in parts of Wisconsin and Minnesota. Expansion markets include other Midwest states and other sites in the continental U.S. including Washington, Texas and Florida.

Lehman showed the board a map of students who reached out for more information. The Upper Midwest showed the most interest; other notable pockets could be found in California, Florida and the mid-Atlantic region.

“There’s about 30,000 dots on this map here, and you can see where we’re starting to generate interest geographically,” he said.

This year’s fall freshman class has 1,301 students, above the 15-year average of 1,239. The number reversed a multiple-year decline following a quarter-century high in 206, Lehman said.

The class includes 191 students enrolled in the new College of Computing.

The freshman class is also well above the national average academically. About 13% of new students scored between 33 and 36 on the ACTs, versus 3% nationally.

“We’ve enrolled 438 students, even though we made it harder to get into that bucket, which gives you a little bit of an idea of the strength of our brand in the market,” he said.

Incoming students have an average GPA of 3.78, versus 3.50 in 2000. (Tech’s scale normalizes a variety of grading systems — such as Houghton High School’s 11-point scale — to a traditional four-point system.)

Efforts over the next year will be focused on what Lehman called “the yield” — students admitted to Tech who then make paid deposits. They made up 27% of admits this year.

For a 1% increase in admits, Tech gets about 15 students, Lehman said. If the yield increases by 1%, the university gets 50 students.

“We’ve been working closely with the deans and the department chairs to reach out to those students after we had met them, and talk to them about all the great things that are going on at Michigan Tech,” he said.