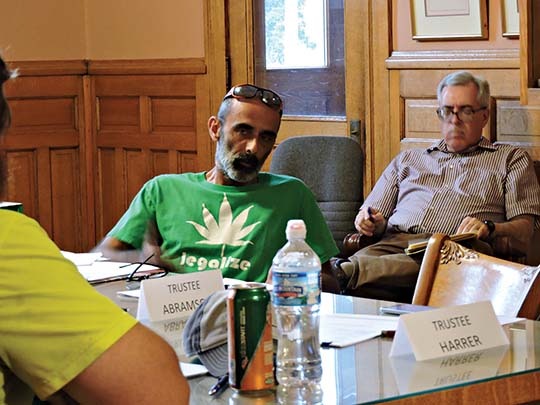 Graham Jaehnig/Daily Mining Gazette Immediately after the Village Council voted to adopt a marijuana facilities ordinance, Nathan Anderson announced his resignation as trustee of the council and left the meeting.

CALUMET — Without prior notice to the Village Council, trustee Nathan Anderson resigned his position about two hours into the regular monthly meeting Tuesday, immediately after the council approved the Adult-Use Marijuana Facilities Ordinance, No. 153, by a 6-1 margin.

“Ladies and gentlemen, it was a pleasure serving you, my time here is done,” said Anderson before he left the council chambers, leaving council members asking if he was resigning, at which point, he submitted a handwritten resignation.

“He got what he wanted, now he’s done,” said former trustee Virginia Dwyer, who was in the audience.

Trustee Roxanne King motioned to accept the resignation, and was seconded by Doug Harrer, he said, to open the floor to discussion.

“We have a document from Nathan Anderson, which reads,” King said: “Effective immediately: I resign as trustee of the village of Calumet.”

During a roll call vote, King said the resignation was very sudden, but she voted to accept it.

“I don’t think it should have been done that way,” he said. “No. I don’t accept it. We’ve still got a meeting. We’ve got to be here for the whole meeting. Be professional about it.”

Trustee Josh Rowe responded simply with a no vote, while Harrer hesitated before voting to accept, as did President Dave Geisler.

The council chambers erupted as audience and council members began attempting to speak over each other in the confusion that followed.

Once the room quieted down, one audience member raised her hand and asked: “What just happened?”