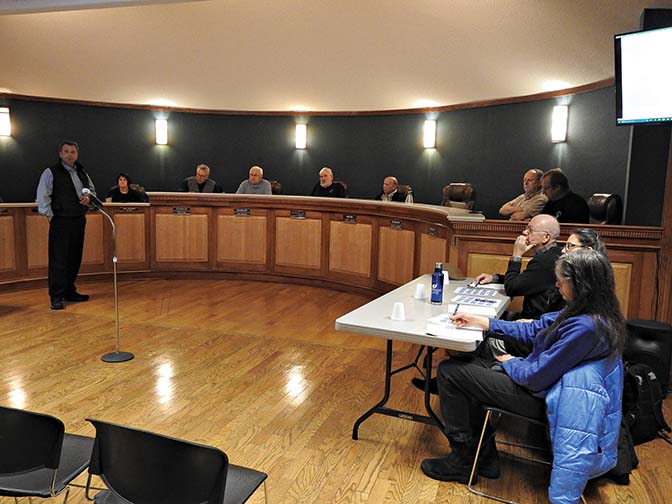 HOUGHTON — Houghton will investigate two sites for the potential relocation of its city office.

At a joint meeting Tuesday, the City Council and Planning Commission voted to have City Manager Eric Waara look at the Continental Fire Co. site and the city parking garage next to the current city center.

They chose to exclude the former Kirkish Furniture building, the third site Waara had mentioned for consideration.

“I think the basic layout and design of the Kirkish building doesn’t really fit the city’s functions as well as the other two,” said Planning Commission member Bill Leder, who made the first motion.

Midwest Loan Services, a tenant on the upper floors of the current city center, is looking to buy the whole building in order to expand. The city offices have been in that building since 1991.

If building at the parking garage site, the city would remove the existing garage and build a single story city center and police station at the Shelden Avenue level, which has about 10,000 square feet. The city might be able to use space on the lower level for storage, Waara said.

Estimates put the cost at $1.5 million for the building and $2 million for parking improvements, Waara said.

The city may also be able to enter into a public-private partnership for a two-story building, in which another business would be on the second floor and share some of the costs.

“It wouldn’t necessarily be a landlord-tenant type of relationship .. there’s a whole lot of different ways these could be structured,” he said.

The third site is the Continental Fire Co. building, whose owners approached the building last week, Waara said. The city would have 14,000 square feet available between that building and the former Crossfit building next door, which is attached. The purchase cost has yet to be determined, Waara said. Buildout would probably be between $1 and $1.5 million, Waara said.

There are only between 12 to 16 parking spots on the site. However, it could allow the city to pursue a crossing over Montezuma Avenue discussed several years ago to enable safe walking for people coming downtown from Heritage Manor, Waara said. A plaza could be built on the Huron Street right-of-way past Heritage Manor for the walkway, which would connect to an elevator lobby in the city building.

The Kirkish building, about 13,000 square feet, would cost about $300,000, Waara said. The estimated buildout cost is about $3.6 million. There would also need to be significant parking improvements. The three-floor structure would also require the city to operate on multiple floors, he said.

Moving would prevent Midwest from moving elsewhere, possibly out of the city, Waara said. It would also enable the city to move out of “the landlord business,” he said. The move would also give the city the chance to move to a more efficient space, he said.

Considerations include operating costs, future needs and the best use of that building, Waara said.

“If you wait too long, some opportunities may not be out there,” he said after the meeting. “But I wanted to do it this way to really get a consensus and at least check one off the list.”