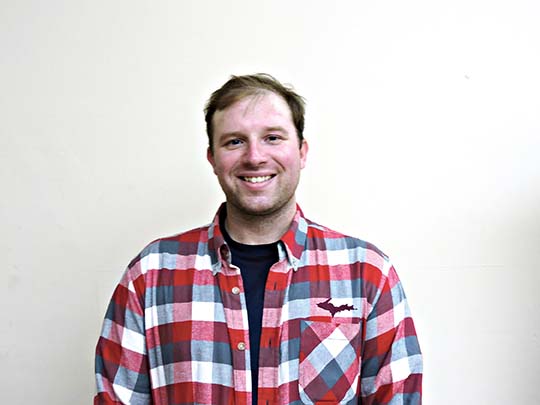 That was a big part of why the Daily Mining Gazette brought him in during late August to become the sports editor. Niemi replaces Daver Karnosky, who was promoted to managing editor in May.

Niemi is the former sports editor of the Iron Mountain Daily News and joined the Gazette staff on Aug. 28.

Before coming to the Gazette, Niemi was the sports editor at the Daily News for four-and-a-half years.

He has a history of athletic participation that goes all the way back to his youth. Born in Hancock, he moved down to join his father at Fort Bragg in North Carolina, where he touched ice for the first time at the age of three.

A love for sports grew from there.

His family moved to Ontonagon in 1993. There, he grew to enjoy baseball and football as well. For him, Ontonagon has always been home. His father coached hockey, which helped motivate him to enjoy the game.

“I’m originally from Ontonagon,” he said. “In high school, I played hockey, baseball and football.”

Baseball and hockey are his two passions. He values both equally, but his favorite sport depends on the season. He is a baseball nut in the summer and a rink rat in the winter.

Currently, he plays league baseball in Iron Mountain with Channing. He is looking forward to joining the Superior National Bank-Stanton squad in the local Twilight League next spring.

Niemi said he has always enjoyed sports, and in his English classes throughout school he found he wrote fairly well without really trying, and decided to combine the two talents.

“I have a bachelor’s degree in science and journalism,” he said, “with a news editorial concentration from Central Michigan University.”

While in school, he wrote for the student newspaper, Central Michigan Life. The paper was nominated three times for a Pacemaker award, winning it once.

He also had a chance to interview prominent figures, both in sports and politics. One sports figure that stands out in him memory is Drew Brees, who was in the midst of a Heisman Trophy run with Purdue University. Niemi was able to secure the interview through Purdue’s sports information director, Jim Vruggink, who just happened to be a Central Michigan graduate. Niemi also had a chance to write a story about Vruggink, who is in the Central Michigan journalism hall of fame.

Niemi also has a distinct love for photography. His passion began with his graduation from Central Michigan in 2010. Upon returning home, he found himself a point-and-shoot camera and headed out to learn the trade. Along the way, he has had a chance to photograph speeches by Herman Cain and Ron Paul. He started shooting locally for the Daily Mining Gazette in 2011, shooting mostly Twilight League Baseball. Around Central Michigan, he started photographing football in 2012, giving him the chance to shoot New York Jets running back Le’Veon Bell when he was playing at Michigan State. He also had the chance to shoot Hockeyville in Marquette in 2016.

He enjoys the challenge of shooting sports like baseball, football and hockey.

“You have to be mostly lucky, more than anything,” he said about shooting baseball.

When it comes to writing, he said hockey is his favorite sport, which is why he was excited to get the chance to cover Michigan Tech hockey.

Niemi loves how passionate the Copper Country community is, something he got to experience firsthand with the voting for the Calumet Colosseum for Hockeyville 2019. He is blown away by the wide fan base that stretches across the U.P.