With Reservation, Quincy finished, Hancock looks to next street project 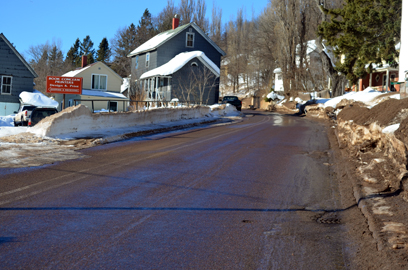 HANCOCK — The reconstruction of Reservation and Quincy streets in Hancock finished just three months ago, but there is another street project set for the upcoming construction season.

During his report at the regular meeting Wednesday of the Hancock City Council, City Manager Glenn Anderson said bids will be accepted April 7 for the resurfacing of White Street. The estimated cost is $250,000, and the city has a $187,500 grant from the Michigan Department of

Transportation for the project.

Anderson said the project will include filling potholes and resurfacing the street.

“It’s about a two or three-day project,” he said. “There are a lot of potholes on White Street.”

White Street will be closed during the project, Anderson said.

“It can be changed back with council’s approval,” he said.

The project must be completed by August, Anderson said.

Anderson updated the council on plans for the reconstruction of Front Street, which will take place this summer, also.

The plans for the project include efforts to make crossings at the north end of the Portage Lake Lift Bridge safer for pedestrians, including better crosswalk markings and a pedestrian island.

The changes should make it easier for drivers to see pedestrians, Anderson said.