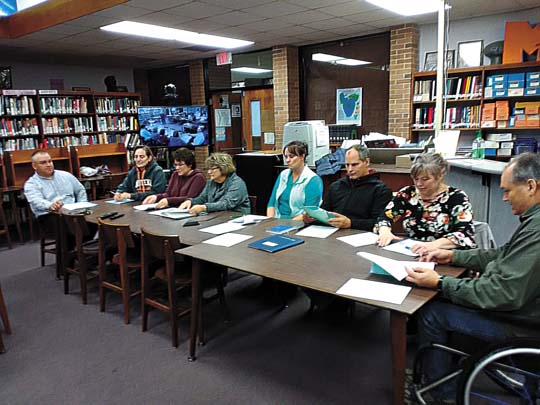 Skip Schulz/For the Gazette The Ontonagon School Board renewed the contracts for the administration staff, with an increase in salary.

The contracts for the administrative staff in the Ontonagon Area School District (OASD) were renewed with unanimous support from the School Board.

“(The Finance Committee) looked at the history, and we have been on a freeze for three years,” said Dean Juntenen, board president.

Juntunen said the district had money to offer the teachers an increase in pay. The administration contract and pay is based on a formula that is compared to the teachers’ union contract.

The amount of the raises was not mentioned at the meeting. The board also unanimously approved the renewal of the contract for all three.

The board also approved the financial audit report from Anderson, Tackman and Company. The audit showed the district had a General Fund balance of $81,287 as of June 30. This included a little more than $19,000 in funds from the previous year.

To get out of “financial distress status,” the district must have a fund balance of 5 percent. The fund balance is around 2.5 percent.

“However, we still did pretty well this last year,” stated Karttunen.

Juntunen followed up with, “We’ve been razor-thin for a couple years.”

The board approved a career and technical education contract with Gogebic-Ontonagon Intermediate School District for the 2018-19 School year. While there were changes to the contract, Bobula stated none of the changes would “affect the bottom line.”

“We used to invoice them. Now everything goes to them,” he said.

OASD had 21 students in the program at the start of the year, Bobula reported.

Concern and questions on the building trades program were raised. Bobula said the process instructors need to go through for certification makes it difficult to get instructors.

In general, Bobula said, the program “has been our solid program.”

The presentation, which was held at the Ewen-Trout Creek School, was to empower students to make a difference in their personal life, school, career and community.

Scott Cleary will take over the girls junior varsity team.

Bob Mayer’s resignation as varsity football coach was accepted. This position will now be posted.