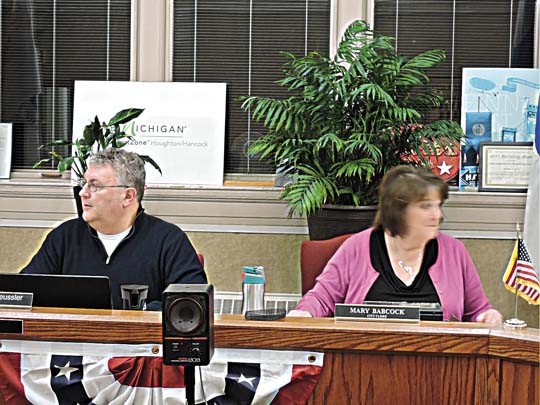 Graham Jaehnig/Daily Mining Gazette Mayor John Haeussler discusses issues and topics he would like to see the Ad hoc Marijuana Committee address as it studies how to move forward on the sales of legalized recreational pot in city limits.

HANCOCK — Concerned with potential problems regarding the recent legalization of recreational marijuana in Michigan, Mayor John Haeussler appointed three council trustees to a newly-formed committee to study related issues to the law.

“The committee is free to proceed at the discretion of the committee members,” Haeussler said. “I’m going to suggest, however, that the committee members don’t focus on promulgating rules and regulations of licensing and regulatory affairs. It is my personal opinion that it would be ill-advised to expect both the council members and the city staff to be involved in doing things like conducting criminal background checks or financial histories, establishing capitalization requirements and so forth that would be required for promulgating rules and regulations for potential applicants seeking a business license.”

Haeussler said the state is already being tasked with those issues, and the city will be obligated to adhere to the state’s rules and regulations.

“I would suggest that there are still many things the committee could appropriate with that, that are in the city’s purview,” said Haeussler.

Among those are what is the city is required to obtain from business licensing applicants, questions of forms required of municipalities, the state’s analysis of projected revenue to be shared by municipalities, and potential federal ramifications of allowing marijuana facilities to operate within city limits, particularly as the city receives funding from the U.S. Department of Agriculture Rural Development. He said he would like the committee to also look at which zoning ordinances would have to be amended.

“The committee can discuss this more in a future work session amongst the council,” Haeussler suggested. “How are we actually interpreting that, because there’s lots of gray area for interpretations in the Rural Development’s marijuana compliance certification and what it really means for a municipality, and given…that Rural Development is a very significant funding source for the city of Hancock.”

The U.P. is in Critical Need for O- and O+ Blood Types