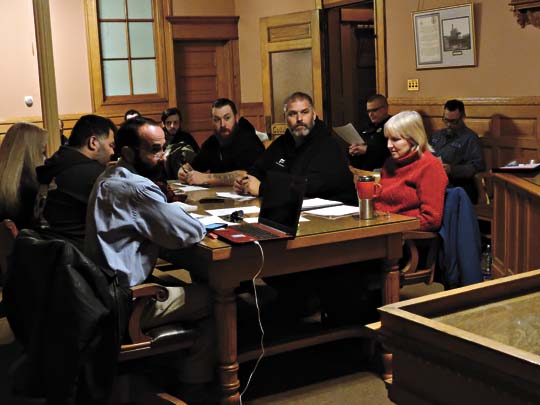 Graham Jaehnig/Daily Mining Gazette Members of the Calumet Village Council got into an argument over proposed procedural changes to meeting rules designed to stop arguing during council meetings.

CALUMET — Trustee Nathan Anderson proposed an extensive number of procedural changes to the rules of the conduct of council meetings designed to make the meetings shorter, more productive, and less hostile. The proposed changes are very similar to those contained in Robert’s Rules of Order, which is a nearly universal template for conducting public meetings.

The proposed changes, he said, are intended to enable the Village Council meetings to proceed in a more timely manner, eliminate repetitive statements and arguments, and also eliminate interruptions of speakers, and to curb disorder. Anderson said those sorts of behaviors have been going on for more than two years. In fact, while most public meetings conclude in between one hour and an hour and a half, Calumet’s council meetings regularly exceed three hours.

Reports, summaries, presentations, and etcetera, should be given without interruption to give the presenter time, courtesy and respect to present in a timely manner, was just one proposal.

Trustee Doug Harrer moved to table the motion until next month’s meeting to give members time to review the proposed changes item by item. Newly elected to the council, Harrer said he was unimpressed with the amount of arguing, interruptions, and general disrespect shown at last month’s meeting. While he agrees with Anderson proposals, he said, the council members should have time to review them.

“It is an incredible amount to ingest,” Village President Dave Geisler commented.

Trustee Virginia Dwyer argued against the proposed changes, calling them insane, then went on to declare that committee meetings are not subject to the Open Meetings Act.

The council voted to table the proposal until the January meeting.