Like other UP towns, no decision yet about marijuana in Ontonagon 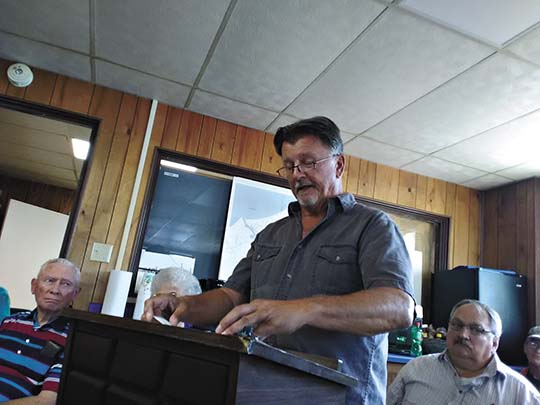 Skip Schulz/For the Gazette Frank Podmorka addressed the Ontonagon Village Council on getting a zoning variance for a carport/garage that he has already begun construction on. The Zoning Board and the Council approved his request with minor changes to the construction.

Ontonagon still has not made a decision on drafting an ordinance to opt out of allowing for a business to sell or produce marijuana within the village limits.

“The committee met ad discussed the new rules,” said Village Manager Joe Erickson. “They will be reviewing a draft ordinance to opt out with a sunset clause, so it can be revisited at a future date. The zoning ordinance will need to be updated to address the types of facilities and their locations.”

Erickson went on to say that the planning commission will need time to address the zoning ordinance changes.

Erickson reported that the marina commission has been working to get a price for the installation of the docks.

“The one bid received from the initial posting was too high to be acceptable,” he said.

He stated that the commission reworked the proposal and requested quotes that were due that morning. No bids were received.

The beach mats for the new lakeshore pathway has been determined for this year. The sites, including the new location for the center mat, will be prepared by the village’s Department of Public Works (DPW). The DPW is also preparing the sites for the benches along Lakeshore Drive. DPW is also doing some cleanup and posting signs to reopen the village’s brush/compost site.

The village is preparing a bid request for sewer and water repairs. A bid will also be prepared for installing a new valve on the M-64 water leak.

Richard Ernest of the Ontonagon Housing Commission Board addressed the council and gave a report on the financial health of the village managed Cane Court. Ernest praised the new administrator, Karen Jackson, as to getting the housing commission in stable financial ground.

Ernest than criticized past management of the housing commission. Two employees that were with Cane Court for over 20 years, Ernest repeatedly stated that his criticism of the past management was “not personal.”

“The Michigan Department of Civil Rights has dismissed the claim of Sue Lockhart against the village,” Erickson said. “With the dismissal of this complaint and the one by Pam Coey, there are no more complaints pending for the village. The housing commission also received a dismissal of a complaint by Sue Lockhart.”

Erickson included the state’s dismissal on both of Lockhart’s complaints were in the handout with his report. The dismissal stated that based on the evidence in the file, “any applicable statements of witnesses, analysis of comparatives and review of document, the department determined there is insufficient evidence to proceed. It is therefore ordered that this complaint is dismissed.”