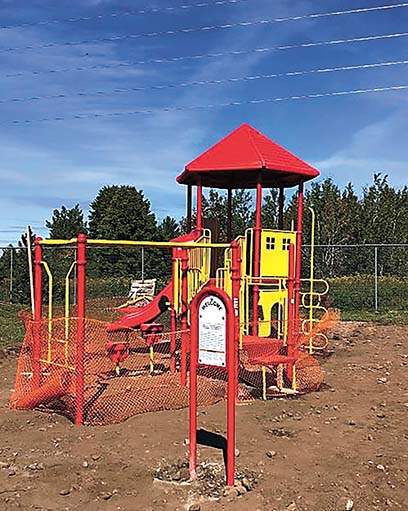 (Photo courtesy of the city of Hancock) A playground erected near the Hancock Driving Park was only one of many recent and potential recreation developments discussed at Wednesday’s City Council Meeting.

HANCOCK — The Hancock City Council approved a rate increase on water and adopted an ordinance allowing community members to purchase flood insurance despite the area not being a designated flood zone at their Wednesday evening meeting. They also discussed a number of potential recreation and development projects.

During a period for public comments, local business owner Missy Gillette proposed a seasonal waterpark attraction at Hancock Beach called “Aquatopia.” The project would cost an estimated $90,000 to purchase and install. Additional costs would include paying for insurance and hiring a staff.

“My business will handle everything to make this installation possible,” said Gillette. “What I would like from you is to be allowed to use a designated area of the beach.”

Gillette had already mentioned the idea to the city’s recreation committee but requires city approval to apply for permits. Her intention is to pay Hancock for the beachfront that she would require to sell tickets and monitor admission to the installation, which would be located past the current swim buoys.

Following the public comments section, Counselor Will Lytle expressed interest in potentially leasing land to Aquatopia. However, Counselors Dan Seguin and Whitney Warstler pointed out that the only other vendor currently operating at Hancock Beach is not required to pay rent for its use of the concessions building. The city and Portage Paddle Sports came to the arrangement at a time when the building had been vacant for a number of years.

The council determined that they would need to talk to the city’s insurance agent before approving the idea.

The council also voted to support a grant application drawn up by Deb Mann of the Downtown Development Authority and City Clerk Mary Babcock. The grant, if approved, would fund renovations to Hancock’s memorial park, located on Quincy Street across from City Hall.

“You’re just asking for [the city’s] blessing because we own [the park], we’re not putting up any money,” summarized LaBine. “I think what you’re trying to do is very reasonable. I’m surprised it’s not more expensive.”

The council also discussed recent and proposed developments to the Driving Park, located near the fairgrounds. The area includes ballfields for local little league teams. Changes to little league regulations require that the fence be replaced with a higher one and the organization will price-match the city on the improvement, which would replace the current old and overgrown fence. The city also recently placed a new play area on the property.

Other recent improvements to the city’s recreational infrastructure include improved tennis courts near the Terrace Park, paid for in part by a $20,000 donation from the Portage Health Foundation.

Editor’s Note: This story has been corrected, it previously stated the tennis courts were in Laurn-Grove Park.