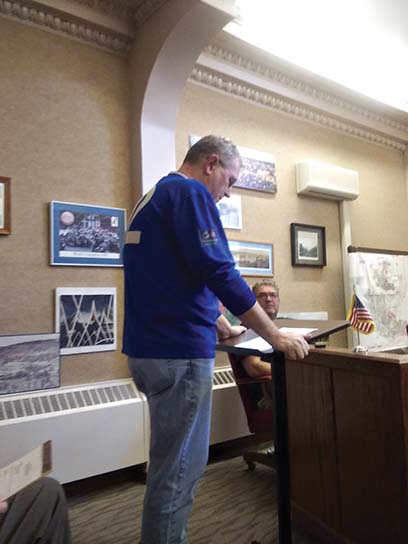 (Jon Jaehnig/For the Gazette) Hancock’s previous mayor, John Haeussler, was one of the concerned citizens who used the public comments period of Wednesday’s special meeting to encourage the Hancock City Council to hear more from the community before acting on marijuana legislation.

HANCOCK — The Hancock City Council held a special meeting on Wednesday to discuss a number of topics, including the possibility of introducing Ordinances 306, 307, and 308.

Ordinance 306 is drafted to allow Hancock to opt back in to the state’s legalized marijuana infrastructure, allowing state-approved businesses to legally sell marijuana within the city. Ordinance 308 is closely related, while Ordinance 307 would create “urban agriculture overlay districts” which would allow a limited amount of commercial marijuana growing to take place in downtown.

The council has previously opted out, making marijuana illegal to sell, because it was believed that allowing legal marijuana sales would impact the city’s federal funding because marijuana remains illegal at the federal level. A Recreational Marijuana Committee was established within the council to research the matter and the committee is now prepared to introduce the opt-in policy.

“We know a lot more now than we did then,” said council member Will Lytle, a member of the committee. ” … This is what we feel is the best recommendation but there is still room for flexibility.”

Wednesday’s special meeting opened with public comment. Hancock resident and former Mayor John Haeussler spoke first. Haeussler was mayor when recreational marijuana passed at the state level and was involved in drafting the temporary opt-out before stepping down for health reasons.

Haeussler also said that he had heard rumors that at least one member of the council was interested in opening a marijuana business in Hancock if Hancock were to opt back in. Council member Ron Blau expressed similar concern.

“Usually, when somebody wants to develop something, they come up here and tell us what they want to do … and I haven’t seen that (regarding marijuana business),” said Blau. “… I agree with John, who on the Council wants this and why they want it so badly?”

Blau asked Lytle if he was interested in opening a marijuana business, and Lytle pointed out that Blau’s downtown Hancock business sells CBD oil and might face competition if a licensed recreational marijuana distributor opened near by, either or both positions being potential conflicts of interest if true and acted on.

Lytle explained that interested businesses have been in touch with the Recreational Marijuana Committee and would be willing to present to the council.

“We’ve been trying to limit that until we knew what the ecosystem for approval would look like,” said Lytle.

City attorney Kevin Mackey also suggested that businesses might not reach out to the city until they had been approved by the state.

The council briefly considered introducing the ordinance in hopes that it would evoke public discussion but the idea made some council members uneasy.

“I feel like I would need a public hearing first before I would vote to introduce, just because I think the community would be more supportive and that it would be a more robust proposal if we could get all of their input,” said council member Stephanie Tubman. “… There’s a lot that (the council) knows that the community doesn’t know.”

The council elected to hold a community information session and public hearing at a time and place to be announced as soon as possible.