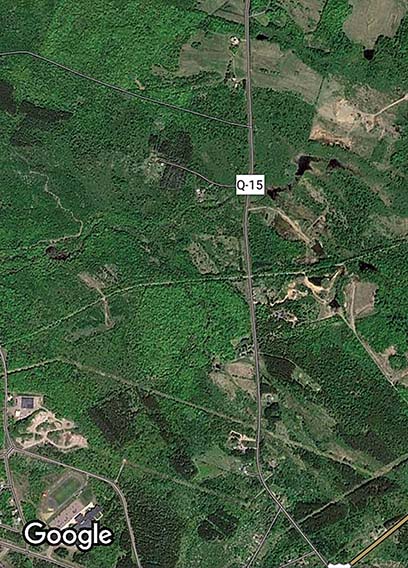 (Image from Google Earth) Construction of a business and technology park has been on the city of Hancock’s master plan for years and 40 acres of land between the Hancock High School and the Lake Annie Road has been set aside for the project for over two decades.

HANCOCK — The Hancock City Council, during their regular meeting last month, voted to investigate using a unique funding opportunity to develop a technology park. Approximately 40 acres owned by the city has been set aside with the intention of creating a business and technology park for over 20 years, but funding has remained an obstacle.

Hancock’s previous mayor, John Haeussler, and City Manager Barry Givens had been at odds on the project. However, in the time since Haussler stepped down as mayor and Givens has been on leave due to his health, a new funding opportunity has become available.

A grant, available through the U.S. Economic Development Administration would pay up to 80% of the costs, according to previous City Manager Glenn Anderson. Anderson, who was brought in on a cover basis to help Acting City Manager Mary Babcock, gave a presentation on the proposed project, including the costs of two designs. Either design would leave the city’s 20% match totaling hundreds of thousands of dollars.

“I’m convinced, a lot of us are, that other funding opportunities are available,” said Anderson. “You probably won’t be able to get that match to zero. I’m not trying to sell you something that you’d get for free.”

Keweenaw Economic Development Alliance Executive Director Jeff Ratcliffe confirmed that Hancock would be a good candidate for state grants, given the need for spaces zoned for technology and production companies.

Specifically mentioned were businesses that graduate from business incubator programs but that are unable to find space in the area once they are ready to expand and invest in their own properties. Projections made by Anderson, who called the park “a natural progression from the SmartZone,” said that the city would see annual revenue in access of $25K within ten years, based on conservative estimates. However, council members were split.

“What has changed in this proposal since Barry rejected it?” asked councilor Whitney Warstler. “… If Barry were still here, would we be having this conversation?”

Haeussler, who was in the audience, said that he had supported the project as mayor and that, if he and Givens were still active on the council, the topic would have resurfaced.

The council voted unanimously to proceed toward application. If the grant is awarded, construction could begin as early as next year.