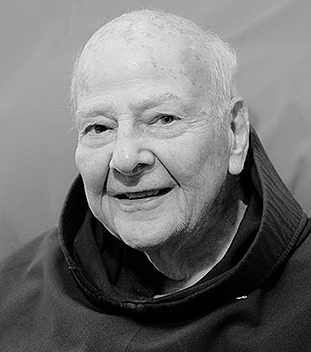 CINCINNATI, OH — Franciscan Fr. Cyprian Berens, 95, OFM, former pastor of St. Paul the Apostle in Calumet, died on May 13, 2019, at St. Paul’s Archbishop Leibold Home for the Aged in Cincinnati, Ohio. He was a friar for 76 years.

He was born on January 26, 1924, in Cincinnati, Ohio. Fr. Berens was the son of the late Edwin and Eleanor (Koch) Berens.

He attended high school at Purcell, Roger Bacon and St. Francis Seminary and continued his education at Duns Scotus College in Southfield.

His ministry led him from parishes in the U.S. to the friars’ headquarters in Italy. After ordination in 1951, Fr. Berens was assistant pastor at parishes in Bloomington, Streator and Peoria, Illinois. In 1957 he was called to Rome as assistant treasurer and secretary at the friars’ General Curia.

Returning to the States in 1960, he then served as novice master at St. Anthony in Mt. Airy, and worked with brothers in formation at Duns Scotus. Again assigned to Rome, he was general treasurer at the Curia from 1963-1967.

From there Fr. Berens was director of the printery at St. Bonaventure College in Florence, Italy, treasurer and teacher at St. Leonard College in Dayton, Ohio, and director of communications for St. John the Baptist Province in Cincinnati, Ohio.

He returned to Rome once more in 1986, as a confessor for the Basilica of St. John Lateran. His last parish assignment, as pastor of St. Paul the Apostle Parish, took him to Michigan’s Upper Peninsula from 1992-2001. He moved to Leibold Home in 2003, serving the community as chaplain until he retired in 2012.

Fr. Berens was preceded in death by his parents; his sister, Mary Ellen; and his brothers, James and Greg.

He is survived by several cousins; and many nieces and nephews.

Following a Mass of Christian Burial at 11 a.m., Fr. Berens will be laid to rest at St. Mary Cemetery in St. Bernard, Ohio.