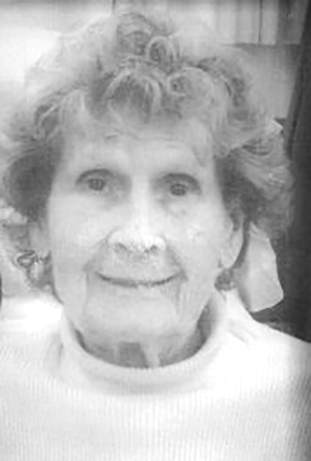 Gean was born to Frances and Mary Dunn Proulx outside of Gagetown, Michigan, in a small French Irish farming community called Frenchtown. Gean had three siblings, Frank (Mary) Bill (Eva) and Shirley (Cliff Wood), who all are deceased.

Gean was a PBX switchboard operator in Detroit after her high school graduation until the outbreak of World War II. During the war, she proudly became a “Rosie the Riveter”, making parts for planes, where she joined the many women who silently served our country in so many important ways. After the war, she resumed to her switchboard job and met E. John (Jack) Hendrickson when he came home from serving in the war.

Gean and Jack married in 1949 and decided to move to Calumet to join the family business, Kilpelas Appliance Store, run by Wayne (Catherine Hendrickson) and Walt Kilpela. Jack, Gean and Jack’s brother, H. William Hendrickson, (our beloved Uncle, Bill) bought out Kilpelas and ran the store for 37 years as part of the Hendrickson family.

Jack and Gean were snowbirds, spending many years in Greenacres, Florida, where they enjoyed golfing, swimming and socializing with the many friends they met. They enjoyed sharing their home with their children and grandchildren and great-grandchildren. Gean was a member of the Calumet Lady Elks Club and a past President of the Lady Elks. She was a competitive golfer, playing in many tournaments; and she and Jack both were members of the Calumet Golf Club and Lake Worth Florida golf Club for many years.

Gean was passionate about learning, encouraging her children and grandchildren to be educated, be informed in political and cultural policy, and to think. She was well-read and encouraged reading in the home. Gean was a card-carrying Democrat, a Member of Sacred Heart Church in Calumet, Saint Christopher’s Parish in Marquette, and Saint Matthews Church in Greenacres, Florida.

Gean was a strong woman, a true Lady who believed in the power of friendship, hospitality, family, and her church beliefs. Gean was a wonderful hostess who set a beautiful table, an encourager, a volunteer at JFK Hospital in Florida and the Barbara Kettle Gundlock Shelter in Calumet.

We are truly blessed to have her as a mother, mother in -law, grandmother and as our GiGi. Thanks, mom.

A Mass of Christian Burial will be held on Saturday, August 17, at 11 a.m. at St. Paul The Apostle Catholic Church in Calumet, with Fr. Gracious Pulimoottil as celebrant, preceded by a visitation from 10 a.m. until the time of the Mass.

In lieu of flowers, the family requests donations are made to Smile Train or Salvation Army.