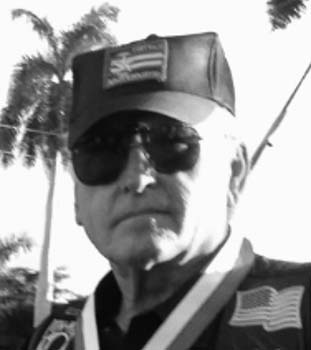 In 1964, he joined the armed forces and was assigned to the Anderson Air Force Base in Guam. He was wounded in 1968 and was later awarded the Purple Heart. He was an active member of the Vietnam Brotherhood at the time of his death.

After leaving the service, he moved to Ft. Myers Beach, Florida. He started out as a shrimper and later ran the gas docks/ice plant for Ballard Oil/Balgas. Jerry was an avid metal detector, traveling from the gulf coast to the shores of Lake Superior. He enjoyed finding lost treasures and locating the owners. Never at a loss for his projects, he was the first one there to help out a neighbor or friend.

He is survived by his fiance, Lois Ebert; his sister, Joanne (Paul) Mum of Milwaukee; a sister, Patti Tardiff of Ft Myers Beach; his brother, Sonny Stevens of Copper Harbor; a brother, Kurt Stevens; several neices and nephews; along with special friends, Rich and Jane Jamsen of Copper Harbor.

A memorial service will take place in Ft. Myers on February 6, 2020. Also to follow, a celebration of his life in Copper Harbor this summer.