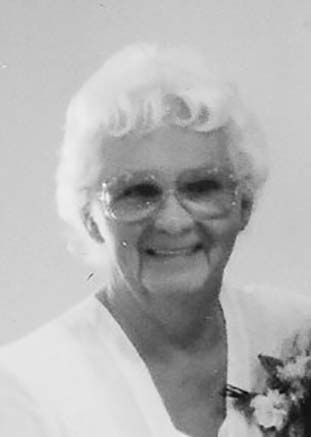 ONTONAGON — Hazel Aileen (Coponen) Torvinen, 91, went to be with her Savior on June 2, 2020, while at Woodland Heaven of Canal View – Houghton County. She has resided there for the past three and a half years.

Hazel was born in Painesdale, to Urho and Martha (Jarvi) Coponen on February 7, 1929. She attended Painesdale Schools and at the young age of 15 she offered to help her parents with their newly born twins.

At 17 years old she met Wilfred Torvinen and they knew it was “Meant to be” for a lifetime. Hazel worked for the Gundlach family and saved enough money to buy Wilfred his wedding ring. They were married in Hancock, on May 18, 1946.

The couple resided in Obenhoff for a short time. They then moved to Ontonagon, where they lived and raised their family for 50 years. Wilfred & Hazel were blessed with eight children and given 65 years of marriage together, before Wilfred passed away.

Hazel read her Bible every morning. She taught Sunday School for many years and had a compassion for others; especially helping the elderly. Hazel worked for many years as a nurse’s aide at the Medical Care Facility/Ontonagon Hospital. Later, she did in-home nursing and traveled many miles to care for her patients.

Hazel was a fabulous baker and cook. For example, she baked and sold many Christmas Tea Rings, Cinnamon Rolls and numerous other goodies. Her recipes have been handed down to many people.

Family was one of her top priorities. She made sure everyone’s needs were met. Her family & friends adored her. Hazel will be genuinely missed by all who knew her.

Preceding her in death were her parents, her husband; infant son, John; daughters, Judith Torvinen, and Barbara (Torvinen) Heikkinen-Therrian; her sister, Helen (Coponen) Alaperet; and her brothers, Wallace Coponen and William Coponen.

Funeral services for Hazel will be held 1 p.m. on Friday, June 5, 2020, at the Atlantic Mine Apostolic Lutheran Church, with Herbert Jarvi officiating.

Visitation will be held one hour prior to the service and a luncheon will follow the service.

Burial will take place in the Riverside Cemetery in Ontonagon.

To view Hazel’s obituary or to send condolences to the family, please visit memorialchapel.net.

The Memorial Chapel & Plowe Funeral Home of Hancock is assisting the family with the arrangements.