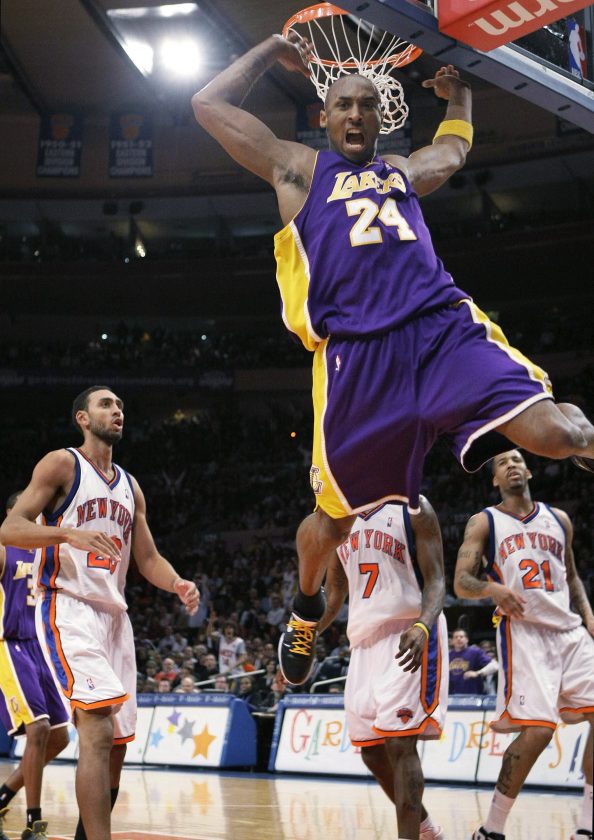 FILE - In this Feb. 2, 2009 file photo Los Angeles Lakers guard Kobe Bryant (24) reacts after a slam dunk shot in the first half of an NBA basketball game at Madison Square Garden in New York. Bryant had 61 points in the game. Bryant, the 18-time NBA All-Star who won five championships and became one of the greatest basketball players of his generation during a 20-year career with the Los Angeles Lakers, died in a helicopter crash Sunday, Jan. 26, 2020. (AP Photo/Kathy Willens)

He earned Los Angeles’ eternal adoration during his two decades as the fierce soul of the beloved Lakers, and he was respected by basketball fans from every place with a hoop and a dream, including his native Philadelphia and in Italy, his other childhood home.

Less than four years into his retirement, Bryant was seizing new challenges and working to inspire his daughters’ generation through sports and storytelling when his next chapter ended shockingly early.

Bryant, the 18-time All-Star who won five NBA championships and became one of the greatest basketball players of his generation during a 20-year career all with the Lakers, died in a helicopter crash Sunday. He was 41.

Both of the AP’s unnamed sources spoke on condition of anonymity because few details of the crash had been released publicly.

Authorities said nine people were on the helicopter, and all were presumed dead. No names were released.

Bryant lived south of Los Angeles in coastal Orange County, and he often used helicopters to save time and avoid Southern California’s notorious traffic. He traveled to practices and games by helicopter before his playing career ended in 2016. He continued to use them after retirement as he attended to his new ventures, which included a burgeoning entertainment company that recently produced an Academy Award-winning animated short film.

The basketball world and Los Angeles reacted with an outpouring of pain and disbelief. Bryant is all but certain to be elected to the Naismith Memorial Basketball Hall of Fame this year, when he is eligible for the first time.

“For 20 seasons, Kobe showed us what is possible when remarkable talent blends with an absolute devotion to winning,” NBA Commissioner Adam Silver said. “He was one of the most extraordinary players in the history of our game with accomplishments that are legendary … but he will be remembered most for inspiring people around the world to pick up a basketball and compete to the very best of their ability.”

The crash occurred about 20 miles from Mamba Sports Academy, Bryant’s basketball training complex in Newbury Park, California. A youth basketball tournament — the Mamba Cup — was scheduled for a second day of competition Sunday at the facility, and Bryant had attended the opening day Saturday with Gianna.

Bryant and his wife, Vanessa, had four daughters. He had been a vocal booster of women’s sports since his retirement, coaching and mentoring basketball players around the world while also backing women’s soccer and other endeavors.

Bryant retired as the third-leading scorer in NBA history with 33,643 points, all scored in Lakers purple and gold. The self-nicknamed Black Mamba was a prolific, gifted shooter with a sublime all-around game and a relentless, hard-edged work ethic that thrilled his fans and almost everyone else, even those who reviled him.

Taking cues from Michael Jordan, one of his idols, Bryant played with a swagger that compelled him to talk trash, to guard the toughest opponents, to play through pain and to demand the ball at the biggest moments of games.

He didn’t always hit them, but Bryant never stopped trying.

“He had zero flaws offensively,” LeBron James said Saturday night. “Zero. You backed off of him, he could shoot the 3. You body him up a little bit, he could go around you. He could shoot from mid-range. He could post. He could make free throws. … He was just immortal offensively because of his skill set and his work ethic.”

Bryant held the No. 3 spot in the league scoring ranks until the day before his death, when James passed him during the Lakers’ game in Philadelphia.

Bryant always reacted graciously to the achievements of James, his former on-court rival who joined the Lakers in 2018.

“Continuing to move the game forward @KingJames,” Bryant wrote in his last tweet. “Much respect my brother.”

Tim Duncan, the San Antonio Spurs great who also retired in 2016, is also expected to be part of the Hall of Fame class that will be announced at the NBA’s All-Star weekend next month. Duncan, now a Spurs assistant, was visibly emotional on the bench during their game against Toronto on Sunday.

Bryant had been spending more time with his daughters since leaving the league. The Bryants’ first daughter, Natalia, turned 17 a week ago. Bianka Bella Bryant is 3 years old, and Capri Kobe Bryant was born last June.

Gianna, better known as Gigi, had a promising youth career and a competitive pugnaciousness that reminded everybody of her dad. Bryant sat with her courtside at a Brooklyn Nets game late last year, clearly passing along his wisdom to his daughter.

Bryant told Jimmy Kimmel in 2018 that Gianna wanted to play in the WNBA and recalled how fans would often approach him saying “you gotta have a boy, you gotta someone to carry on the tradition, the legacy.”

Gianna took exception: “She’s like, ‘Oy, I got this,'” Bryant recalled.

News of Bryant’s death inspired an outpouring of grief around the sports world and beyond, but it was felt particularly painfully in Los Angeles, where Bryant was unquestionably the sprawling city’s most popular athlete and one of its most beloved people. Buildings from downtown to Los Angeles International Airport were illuminated in Lakers purple and gold.

The Lakers’ next game is Tuesday night against the crosstown rival Clippers, but hundreds of fans — many in Bryant jerseys and Lakers gear — spontaneously gathered at Staples Center and in the surrounding LA Live entertainment complex on Sunday, weeping and staring at video boards with Bryant’s image before the Grammy awards ceremony.

“I thought he was going to live forever,” Lakers great Magic Johnson told KCBS-TV. “I thought he was invincible. … There was nobody who took more pride in putting on that Laker uniform than Kobe. Nobody. He was just special. We will miss him and we’ll remember him for his greatness, but let’s not forget how he impacted the world, too.”

Bryant retired as the Lakers’ franchise leader in points, games played, 3-pointers and steals — no small feats on a franchise that has employed many of the greatest players in basketball history.

The NBA kept its games on as scheduled when the news broke. The Spurs and Raptors both took voluntary 24-second shot clock violations at the start of their game in honor of Bryant, who wore No. 24 for the second half of his career.

Several other teams followed up by deliberately taking delays of 24 and 8 seconds, honoring both of his jersey numbers. Many players were seen crying before their games, and James looked emotional on the tarmac when he got off the Lakers’ team plane from Philadelphia.

Bryant’s future appeared to be limitless in retirement, whether in sports or entertainment. He opened a production company shortly after leaving the Lakers, saying he was just as passionate about storytelling as he had been about his sport. He won an Oscar in 2018 for his contributions to “Dear Basketball, “ an animated short about his relationship to the game. He also produced content for ESPN.

In 2003, Bryant was charged with attacking a 19-year-old employee at a Colorado resort. He had said the two had consensual sex, and the charge was eventually dropped when the women declined to testify in a trial. The woman later filed a civil suit against Bryant that was settled out of court.

Bryant went on to become one of the NBA’s most popular players and the face of the Lakers. Winning a record four NBA All-Star Game MVP awards, he was the overall league MVP in 2008 and a two-time NBA scoring champion, but he also earned 12 selections to the NBA’s All-Defensive teams.

A two-time Olympic gold medalist with the dominant U.S. team, Bryant retired in 2016 after scoring 60 points in his final NBA game. In December 2017, the Lakers hung banners retiring his No. 8 and No. 24 jerseys in the Staples Center rafters in an unprecedented double honor.

Bryant looms large over the current generation of NBA players, most of whom grew up either idolizing Bryant or absorbing his work ethic and competitive spirit in the same way Bryant’s generation learned from Jordan. Bryant exemplified and passed on that mentality to James, Stephen Curry and the NBA’s current wave of high-scoring superstars.

After James passed Bryant on Saturday, he remembered listening in awe to Bryant when the superstar came to speak at a childhood basketball camp.

“I remember one thing he said: If you want to be great at it, or want to be one of the greats, you’ve got to put the work in,” said James, who later teamed up with Bryant on the 2008 U.S. Olympic team in Beijing.

Bryant was a basketball superstar for his entire adult life, and he grew up from a teenager to a respected veteran in the unforgiving Hollywood spotlight.

He entered the NBA draft straight out of suburban Philly’s Lower Merion High School in 1996 after a childhood spent partly in Italy, where his father, former NBA player Joe “Jellybean” Bryant, played professionally. Bryant was occasionally estranged from his now-65-year-old father, but reconciled.

Bryant spoke four languages and played a major role in the NBA’s international growth over his two decades in the league, traveling the world and connecting with athletes in other sports and celebrities.

The Lakers acquired the 17-year-old Bryant in a trade shortly after Charlotte drafted him, and he immediately became one of the most exciting and intriguing players in the sport alongside O’Neal, who had signed with the Lakers as a free agent. Bryant won the Slam Dunk Contest as a rookie, and the Lakers gradually grew into a team that won three consecutive championships.

Between those title runs and before the quiet final years of his career, Bryant accomplished innumerable feats including an 81-point game against Toronto in January 2006. Bryant’s final NBA seasons were dogged by injuries, but he still went into retirement with that jaw-dropping 60-point performance against Utah. 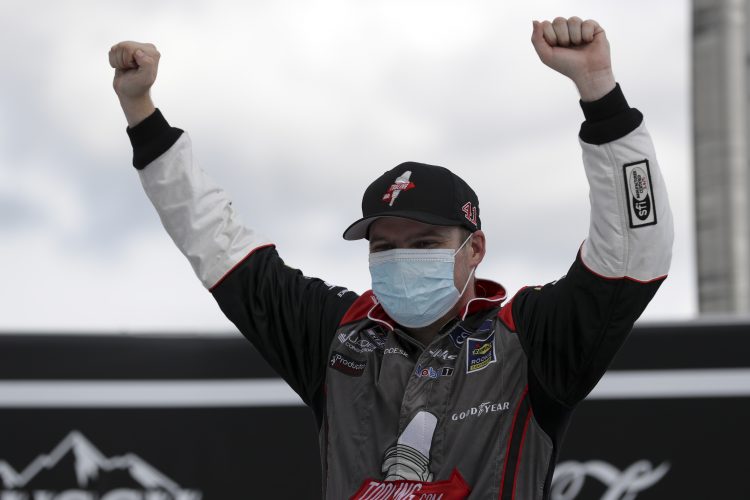 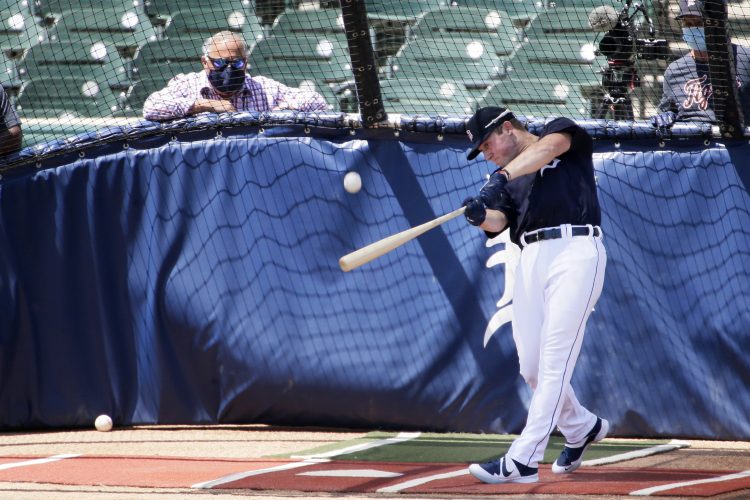 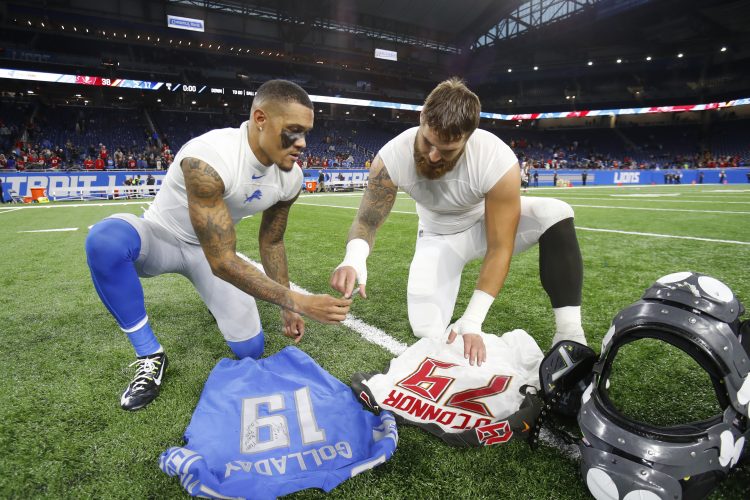 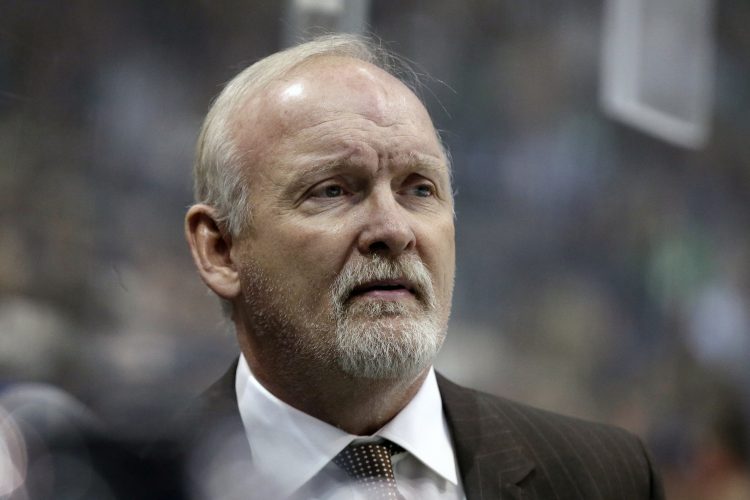 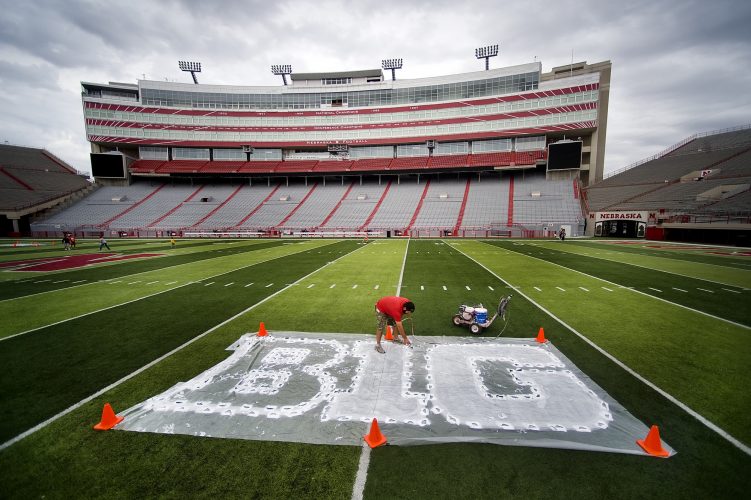