After strong start, No. 15 Michigan Tech ready for home debut 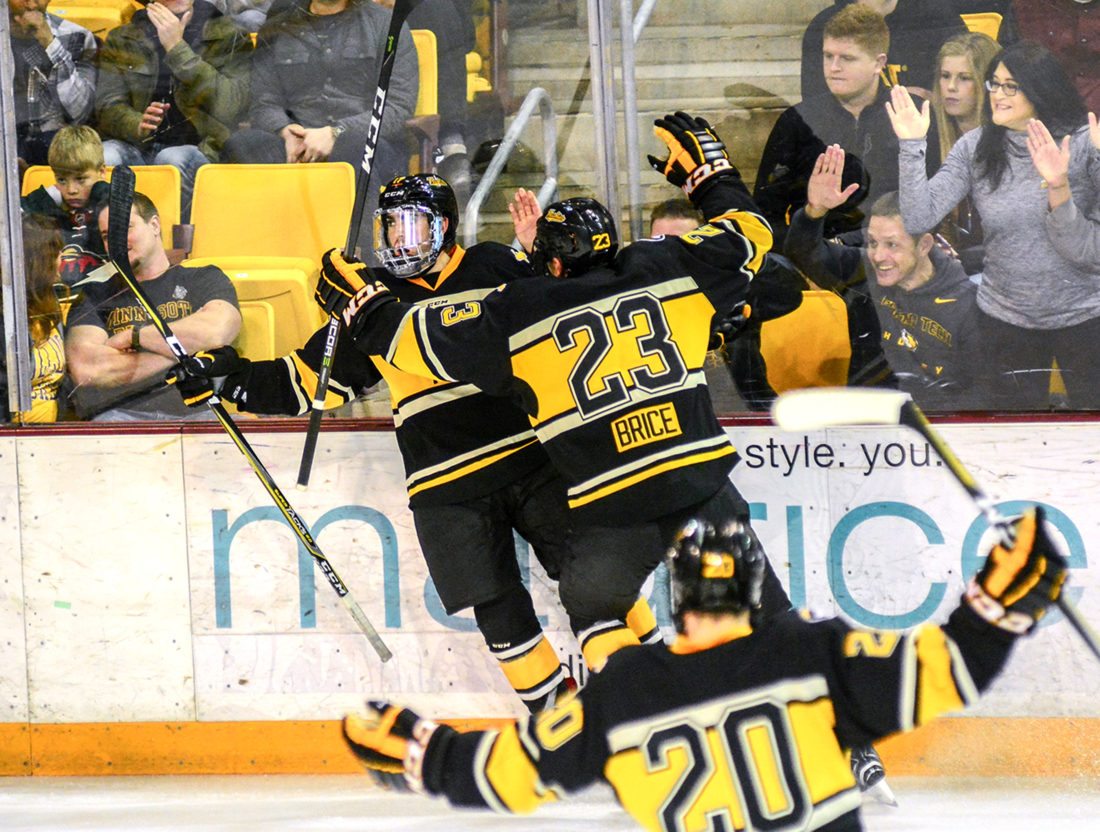 HOUGHTON — When Michigan Tech fans last saw their team take the ice in their home jerseys at the MacInnes Student Ice Arena, it was the WCHA Playoff Championship game, which they won in double overtime to earn a trip to the NCAA tournament. On Friday, the Huskies (3-1-1, 1-0-1-1 WCHA) make their 2017-18 debut at the MacInnes against the Alabama-Huntsville Chargers.

The Huskies come into the weekend after a successful weekend at Lake Superior State. On Friday, the Huskies struck four times in a 4-3 victory in a game that included the first career goal for freshman center Greyson Reitmeier. Saturday, the Huskies held a 2-1 lead in the third period before surrendering the tying goal. The game ultimately went to a shootout before assistant captain Jake Lucchini potted the only goal, earning the Huskies the second WCHA point on the night.

“Our team is really building in terms of detail,” said assistant coach Dallas Steward. “We are working really hard on that keyword: transition. The ability to transition and the mindset behind that.”

The power play continues to be a strength for the Huskies in the early going, and Steward attributes a lot of its early success to how the team has taken advantage of what other teams give them.

Steward also attributes some of the Huskies’ early season success to how quickly the coaching staff has meshed, which has helped them get their ideas across to the players.

“It’s a credit to Chris Brooks and Joe [Shawhan],” said Steward. “Their ability to help translate, as a staff, those thoughts into action, to where the kids have practice plans and video review.”

While things have gone well for the Huskies thus far, Steward feels there is still plenty for the team to work on improving over the course of the season.

With his goal Saturday night in the first period, senior Alex Gillies became the 11th Huskies skater to score already this season. Gillies’ hard work paid off, and that is something that Steward is pleased to see from the veteran and his linemates.

“They are earning more opportunity through their effort in the first and second periods, translating what we are trying to teach,” said Steward. “That’s credited to Gillies scoring a goal, and some of these other guys are making a difference in the depth of our opportunity to win.”

With several players chipping in offensively, the pressure is off of the line of sophomore Gavin Gould, assistant captain Joel L’Esperance and Lucchini. The trio has responded by flourishing early on, with all three having racked up five points each.

With his game-winning goal Friday, Reitmeier became the fourth Huskies skater to score his first career goal. The 6-foot-3 center did not start the season in the lineup but has had an impact for the team since the game against Union.

Reitmeyer is playing the game the way Shawhan wants him to, using his full frame to his advantage, and that has allowed him to come up with pucks that he might not have early in preseason.

“He’s adjusting to the pace,” said Steward. “Second to that is his compete. He’s won a lot of battles where he has finished checks and come out of corners, in a position where we call it a 50-50, he comes out with the puck as opposed to just being there.”

The Chargers come into this weekend 0-2-0 on the season, having lost twice two weeks ago to then-No. 8 Notre Dame in a series where they scored just three goals.

The Chargers won’t blow teams away with their speed or their skill, but they will work hard, and that leads to offense. They are known for their talented blue line and strong goaltending. Junior defenseman Kurt Gosselin scored 18 points last year and was recognized by media members as one of the preseason players to watch this season. Senior goaltender Jordan Uhelski played tough against the Huskies last season at the MacInnes.

Game times on Friday and Saturday will be 7:07 p.m.