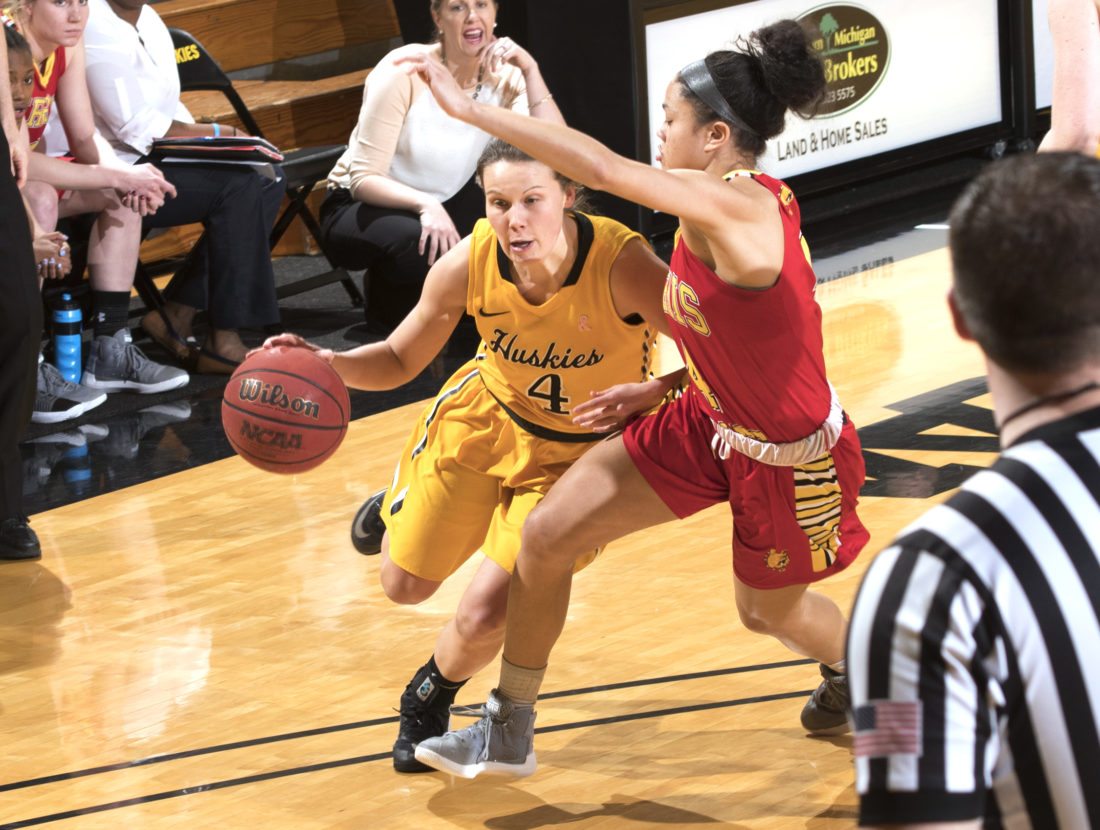 HOUGHTON — The first half for Michigan Tech was basketball’s version of immortality. It’s what happens when each player on Tech is going off all at once and the defense can’t do anything about it. The ball zipped over to each open player, always one step ahead of Ferris State’s defensive rotation for an easy look. Then, Tech shot with confidence and in rhythm — 3s, layups or drives to the basket, the Huskies had it all working.

The result was 54-first-half points for Tech’s highest-scoring half of the season, and it was enough to overcome the offensive lulls later on as Tech earned an 80-63 GLIAC win over the Ferris State Bulldogs Thursday at the Wood Gym.

“I just honestly think our ball movement was really good,” Tech coach Kim Cameron said of the first half. “We get the best shot for the team, and I think the ball was shared and the point-scoring was shared.”

With five players who average at least nine points per game, a scoring balance has long been a signature trait for Tech this season. This time, it was junior Elizabeth Kelliher leading the way with 16 points and 13 rebounds, while senior Kelli Guy (15), junior Michelle LaFave (12), senior Hannah Stoll (11) and sophomore Hannah Hobson (10) each reached double figures.

“You never know where the next basket is coming from,” said Guy, who is now 25 points away from 1,000. “We just try to read how the defense is playing, and honestly, nobody cares who scores on the court, so it’s always fun.”

LaFave came off the bench to make all five of her shots in the first half. Her second 3 put Tech ahead 50-26 with 1:43 left in the half.

“To start with, we really had control of the first 20 minutes of the game,” Cameron said. “To get that feeling and be able to sub and do their jobs the way that they were, I thought that was awesome for us and our team.”

It’s the second time this season Tech has scored at least 80 points in back-to-back contests. Tech had a three-game stretch of 80-plus in early December. But what makes this recent scoring run impressive is that Tech has done it without senior guard Lindsay Winter (11.2 points per game), who watched Thursday’s game on the bench with a cast on her foot.

“There’s not an update yet,” Cameron said of Winter’s potential return. “We’re keeping our fingers crossed and hoping for the best.”

So far, Tech’s depth has been able to make due in her absence. Part of it has been Guy’s recent shooting stretch; she’s 8 of 17 from 3 in the last three games, averaging 15.6 points per game during that span.

“We’ve been so balanced, so that makes us really tough to guard. We know anyone on this team can knock down shots, so I’ve just been trying to stay aggressive,” Guy said.

Similar to Tech’s 86-81 win on Saturday over Northwood where Tech led by as many as 24 in the fourth quarter, the Huskies allowed Ferris State back into the game. The Bulldogs went on a 15-2 run from the end of the third to midway through the fourth, cutting Tech’s lead to 70-56 on a layup from Shaniya Huggins.

Midway through the second quarter, Ferris State began full-court pressing Tech. The pressure began to take its toll and Tech was out of rhythm and not able to get into its halfcourt sets consistently in the second half. The Huskies shot just 7 of 19 from the field in the second half.

“I really think (Ferris State’s) pace messed with us,” Cameron said. “I didn’t think we handled it very well, and it got us out of sorts and we started taking quick shots. Then when we did get it in the halfcourt, we had too many turnovers into our offense. Things were a little bit chunkier when you’re faced with some adversity when Lindsay’s out. That’s OK. We’re learning, and I think this game will make us better longterm.”

Next, Tech hosts Lake Superior State on Saturday at 1 p.m.