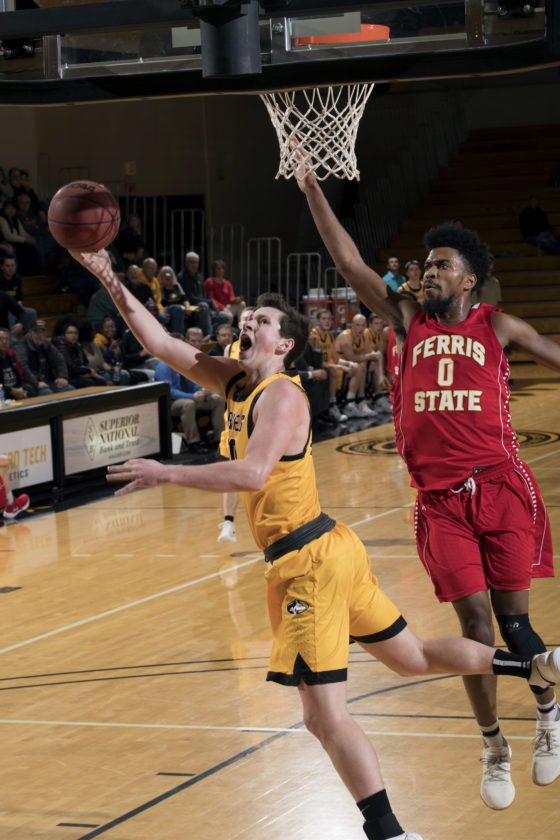 HOUGHTON — It’s no secret the Michigan Tech Huskies are typically at an athletic and size disadvantage compared to their GLIAC counterparts. In order to negate the athleticism gap, precise execution for the entire 40 minutes is necessary — none more so than against the bigger and faster No. 3 Ferris State Bulldogs.

But here Tech was, featuring a three-point lead with just 6.9 seconds left. The Huskies fouled to put Ferris State junior DeShaun Thrower at the free-throw line to make sure a 3 didn’t tie the game.

Thrower missed the front end of a one-and-one.

But then perhaps Tech’s biggest and most costly mental lapse occurred as no one got a body on Ferris State’s Zach Hankins. The 6-foot-10 junior center snared the rebound, tossed it out to Ferris State senior Noah King who swished a 3 from the corner to force overtime.

A dejected Tech squad could not recover in the extra session, and Ferris State escaped with an 89-84 GLIAC win Thursday at the Wood Gym.

“I feel bad for our guys. We played well for 39 minutes and 56 and a half seconds,” Luke said. “That’s something everyone should learn from is detail. The game’s not over until 40 minutes is up. If you get one rebound, you win the game. One rebound.”

Tech junior Kyle Monroe led the way with 35 points and 10 rebounds while putting Tech (13-11, 10-7) into a position to pull the upset. He made two free throws to cut Ferris State’s lead to 72-71 before driving and finding senior A.J. Grazulis for a layup and a 73-72 advantage with 1:19 remaining. Monroe then converted two more free throws for a 75-72 lead with 6.9 seconds left.

Hankins, the reigning GLIAC Player of the Year finished with 13 points and 14 rebounds. But despite featuring a wider catch radius and better quick-twitch leaping ability than anyone on Tech, there’s no reason he should have caught the ball undeterred.

“He made it from one side of the lane to the other, and that’s on us … That’s unacceptable,” Monroe said. “That’s not him being taller; we need to get a body on him. We have two guys on that side. A guy like that, you have to pinch. You know he’s going for the rebound hard.”

If body language could decide outcomes, it was clear to each of the 1,061 in attendance that Ferris State (26-1, 16-1) would prevail in the overtime. Rejuvenated by the chance of new life, Ferris State opened the overtime with a layup by King and a mid-range jumper from senior Drew Cushingberry, King hit another 3 for an 82-77 lead with 2:32 left.

King led the Bulldogs with 20 points while Cushingberry finished with 19.

It’s the second consecutive game Ferris State has been saved by a 3 at the end of regulation. On Saturday, senior guard Peter Firlik converted a 40-foot desperation 3 to force overtime against Ashland. The Bulldogs prevailed in overtime, 97-91.

“Credit goes to Ferris State,” Luke said. “They might be the best team in the country. They didn’t quit, we didn’t quit. They just made the baskets.”

Monroe did his best to keep Tech in it. He swished a step-back 3 from the left wing over Cushingberry to cut Ferris State’s lead to 84-82 with 50 seconds left. Then, Monroe made a runner off the glass, trimming the deficit to 85-84. With 15 seconds remaining, Firlik made two free throws and Tech turned it over on the following inbound pass to seal the outcome.

“We put ourselves in a spot where we thought we should have got it done,” Monroe said. “Couple lapses down the stretch that if we want to compete in the tournament at all, we can’t have that.

“This is what we’re capable of doing any night. We know we can play with anyone on any night. When we’re executing our stuff, we’re a pretty good team.”

Ferris State’s full-court pressure gave Tech fits, forcing the Huskies into three turnovers in the opening minutes, allowing the Bulldogs to take a 9-2 lead. Tech practiced against seven defenders during the week to prepare for Ferris State’s press.

“We just got sped up and until we get ourselves under control, we’re going to suffer a bit,” Luke said.

After getting acclimated to Ferris State’s speed, Tech turned it over just seven more times the rest of the way. The Huskies shot 15 of 24 in the first half to take a 44-40 lead after surviving Ferris State’s 3-point barrage. The Bulldogs made seven of their first eight 3s with sophomore D’Angelo Hughes converting his first four attempts from 3. Hughes’ fourth 3 made it 30-20 in favor of Ferris State before Tech closed the half on a 24-10 run.

Down the stretch, Tech leaned on Monroe as he scored 26 of Tech’s 40 points in the second half and overtime, showing off his entire offensive repertoire. During a sequence in the second half, Monroe drilled a step-back 3 as the shot clock wound down, converted a left hook off a spin over two defenders and scored another hook over Hankins for a 66-65 lead with 6:59 left.

“The big thing is you just have to get vision on (Hankins),” Monroe said. “A lot of times he’s coming early, so you take one extra dribble or one extra shot fake.”

Next, Tech hosts Lake Superior State on Saturday at 3 p.m.