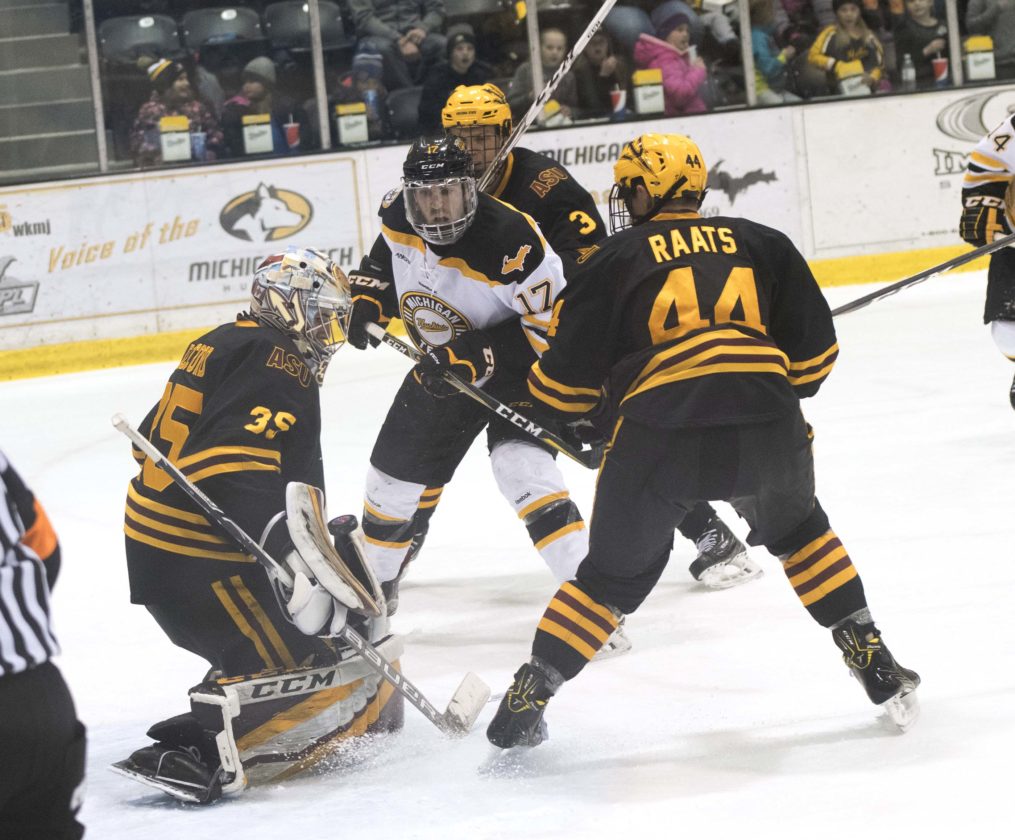 HOUGHTON — After two periods Michigan Tech’s Devin Kero and Arizona State’s Joey Daccord were locked in a duel. In opposite nets there were feet of ice between them, and neither could see their opponent’s eyes, but they were both waiting for the other to blink.

Through two periods the goalies had nearly identical performances. In the first period, Tech’s Jake Lucchini scored on the backside giving Daccord no time to adjust. In the second frame, a defensive breakdown by Tech left Kero exposed. He made one save before Johnny Walker scored on a rebound.

But from there the two were solid, and by the time the second ended, Daccord had 21 saves and Kero had 19.

So the question appeared to be, “Who will blink first?”

It took until overtime, but Kero blinked and Arizona State (8-18-5) came away with a 2-1 victory Friday at the MacInnes Student Ice Arena.

Jacob Wilson and Brinson Pasichunk skated for the net in a 2-on-1 situation after a defensive breakdown by Tech (15-14-5), and Pasichnuk threaded the puck to Wilson, who fired it past Kero. The red light went on above the net, the Sun Devils celebrated and Kero skated dejectedly away.

Kero may have blinked when the shot came at him, but both of ASU’s goals never should have gotten to the netminder in the first place.

To make things worse for Tech, the Huskies had chances to end the game in the third period — 16 to be exact.

Tech started the third frame with 10 shots, while ASU didn’t record one. The Huskies put the pressure on Daccord, while Kero was left unchallenged for the first 10 minutes. But Daccord responded, saving every attempt.“I thought he was fighting it in the first period. He wasn’t that sharp,” ASU coach Greg Powers said. “But when a kid can pull themselves out of it and get it together, that is a good sign. He was really good in the second, and in the third, he was just awesome. He held us in it.”

ASU didn’t get a good scoring chance until a 2-on-1 developed at 7:58. Kero set up, but Steen Pasichnuk’s shot didn’t end up on frame. Kero didn’t have to make a save until there were less than six minutes left in the contest.

But despite the mismatched period, Daccord still didn’t flinch. And when Kero was finally challenged, he didn’t either.

With 1:55 left in regulation, ASU had another 2-on-1, and Brinson Pasichnuk fired on Kero, but the senior came up with the save to preserve the tie and force OT.

But when overtime started it took no time at all for ASU to put the Huskies away. The Sun Devils netted their goal at 2:24, for their second win against Tech this season.

Tech owned a 16-2 shot advantage over ASU in the third period, something that actually ended up hurting Kero in overtime.

“It is not easy to make a save (when you haven’t been getting shot on). But Devin gave us a chance and made some really good saves,” Shawhan said. “They could have scored on both of their chances in the third, but Devin did his job.”

Daccord finished with 39 saves, while Kero had 21.

In the end, it was the same old song and dance for Tech, just will a little more flare. A dance that no one much cares for, and a song with a terrible tune. Tech gained a lead (1-0 in the first period). Tech gave up the lead (ASU evened it at 1 in the second). And Tech, eventually lost the game.

The Huskies can’t seem to play quality hockey for a full three periods, and they can’t seem to do it in consecutive games, either. It was all smiles for Tech after last weekend’s Winter Carinal win, but on Friday there was once again, nothing to smile about.

“There are mental mistakes that we just haven’t been able to overcome,” Shawhan said. “Ferris State, how many times this year, three times. Arizona State at the tournament. Bowling Green, I mean lots of teams. We play well at times and we don’t get rewarded for it, but we do shoot ourselves in the foot.”

Tech and ASU will square off again today at 7:07 for their third meeting of the season. ASU won the first in the Ice Vegas Invitational Championship game on Jan 6. The Sun Devils got out to a 3-0 start before Tech battled back and fell short, losing 3-2.

“Arizona State has beat us twice now,” Shawhan said. “It is not a fluke. They do the little things well. They are attentive.”