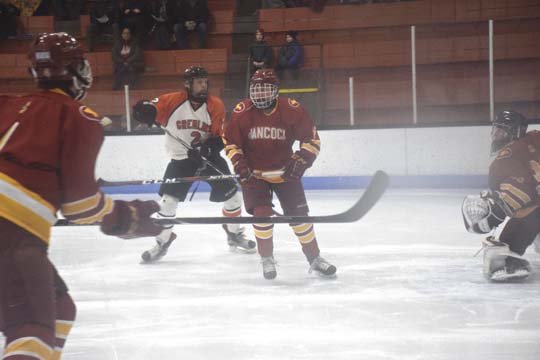 Jamie Glenn/Daily Mining Gazette Houghton’s Seth Francois looks for a rebound off the pads of Hancock goaltender Phillip Rios while Rios’ teammate Kyle Maki (6) looks to offer support during a game Monday at the Dee Stadium.

HOUGHTON — What started as a gritty matchup between rivals for 34 minutes turned into a blowout in the third period as the Hancock Bulldogs hockey team continued to struggle with penalties at key moments in a 6-1 loss to the Houghton Gremlins Monday at the Dee Stadium.

Gremlins coach Corey Markham was happy to see his team pick up momentum after a two-period stretch that saw the Gremlins carry a 2-1 lead into the third.

“I thought it was a slow start for us,” he said. “I just thought we were sloppy and didn’t compete to our normal level in the first period. I thought Hancock did a nice job.”

Houghton juniors Carson Stevens and Ty Halonen set up forward Tucker Tapani to place a shot in the right side of the net just as Bulldogs senior goaltender Phillip Rios fell down into his net at the 8:30 mark of the opening frame.

Rios made 34 saves in the contest before yielding his crease to Brandon Pietila for the late stages of the third after an apparent injury.

Hancock evened things up at late in the middle frame when freshman forward Leroy Bastian, who set junior center Colton Salani loose on a breakaway. Salani scored at 14:58.

The tie was short-lived Gremlins senior defenseman Justin Norkol regained the lead just 41 seconds later that his team held the rest of the night.

Both coaches saw the two teams separate themselves after 34 minutes of play.

“It was a close game halfway through,” Markham said. “Hancock scored to tie it up, (but) we were able to answer (to) make it a 2-1 game to go into the third.

“I thought we were in it for two periods and then (we) got some penalties in the end of the second period and had to carry over power play,” said Bulldogs coach Dan Rouleau. “The biggest thing with these guys is they just ran out of gas. (We have) just enough for three lines now. We didn’t get a chance to get the third (line) in there too much. I think our top two lines just got a little tired at the end of the game.”

“Chad Nordstrom is so good with the puck,” said Rouleau. “He made a mistake on one of the goals, but I told him to just forget about it (because) he makes too many great plays for us. He stands out a lot when he’s out there.”

The Gremlins took control in the final frame with back-to-back goals. Junior forward Jiseung Choi struck at 2:51 and junior forward Niko Rajala buried the next one just nine seconds later to give Houghton a 4-1 lead.

Senior forward Brad Gauthier buried one in the top right corner of the net to give Houghton a 5-1 lead before Rajala capped the scoring at 14:17 to close things out.

“You always want to beat your rival,” said Markham. “It’s always going to be a big game, no matter what. This was a non-conference (game). Anytime you play your arch rival, you want to beat them and beat them bad. For that, it was good and we’re happy to get the win. I was happy. I thought it was a good team effort.”

“It’s a rivalry (that’s) been around for years,” said Rouleau. “It’s physical and that’s the way it should be between these two teams. There’s a lot of pride (for both teams). Houghton’s playing really well right now and they ended up knocking us off.”

Hancock will face Negaunee on Thursday at the Houghton County Arena at 7 p.m. Houghton is off until Saturday when they host Bay Port.