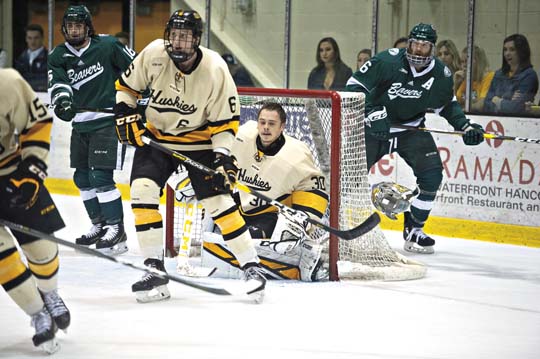 HOUGHTON — The Michigan Tech Huskies hockey team have found themselves in a tough spot after falling 3-1 on back-to-back nights to the Lake Superior State Lakers (20-8-2 overall, 15-7-2 WCHA) in WCHA conference play last weekend. The Huskies find themselves in a bit of a bind heading into this weekend’s matchups with Alaska-Anchorage as they need seven points to catch Northern Michigan and Bemidji State.

With the sweep, the Lakers moved into a tied for second place Bowling Green as both teams now have 47 points.

Michigan Tech (12-16-4 overall, 11-10-3-1 WCHA) currently sits in sixth place with 37 points, but have been close in a number of matchups that have not fallen in their favor. Much of the reason the Huskies have been competitive despite the losses has been strong goaltending.

“Despite of the outcome of the scoreboard, we’ve been in every game all the way to the end,” said Huskies assistant coach Dallas Steward. “I think we give a lot of credit to our goaltending as a whole, all three of them, but also Matt Jurusik.

“Ever since he had the opportunity to play up in Anchorage, where he had two shutouts, he’s playing great. He’s really been a top end goaltender just stopping pucks that he shouldn’t have.” He’s kept us in some tough situations. I think at the end of the day that’s a goaltenders job, not just to stop a puck, but to give us a chance to win.”

Despite having the same outcome of Friday’s loss on the road, Steward saw Saturday’s game as a better effort.

“I think we generated more offense in Saturday’s game in the second and third period then we did the night prior,” he said. “We’re generating some offense. I think, defending wise, we’re not giving up a lot because of our goaltending (and) on five-on-five, so I think that’s a quality thing we’re (going) to try to take to another level.”

Offensive pressure is still of a work in progress, but the special teams are executing well. A complete game could make all the difference as Michigan Tech heads into their last four regular season games of the year.

“It’s the difference of one shot. It’s been that way since January. We score one more and give up one less, then I think we are talking about different things. I think that we’re in the position to go into the weekend against Anchorage to hopefully score more and, defensively, take it to another level.”

Michigan Tech has integrated much of the freshman class into the lineup. When asked how the freshman have contributed as of late, forward Brian Halonen came to mind first for Steward.

“I think we’re getting contributions from Brian Halonen on the power play. He’s definitely contributing on the scoresheet,” said Steward. “We’re not scoring a lot of goals as a whole right now, but I think in terms of the other parts of the game that (we) look for to generate offense. We’re having contributions in terms of puck presence, forced turnovers, takeaways (and) ending cycles to get the puck back. Our freshman are competing.”

The freshman nearly have their first full season under their belts, but are still learning the balance that is necessary for success at the end of the season.

“I think as freshman, the grind of February in college hockey with school is another whole new experience for those guys. They’re doing their best and are competing. We’re averaging seven or eight freshman a night in the lineup. That’s a lot ,and I think they’re really coming along.

“The biggest thing we’re looking for is growth from everybody. let alone the freshman. The growth is there, (but) it doesn’t always show up on the scoresheet.”

Sophomore Marcus Russell has worked his way into the lineup as well, playing in the last four games and bringing a high energy to the team, on and off the ice.

“He’s a wonderful young man in terms of his commitment to being a good person away from the rink (and) a good student,” Steward said. “He comes and brings his heart every day at practice. He competes.

“He shows up with a smile in spite of the lack of ice time that he’s gotten through this year. He still comes and brings his lunch pail. He doesn’t impact anybody for the negative.”

The Huskies host Seawolves, who are 2-19-3 in conference play and 3-23-3 overall. Despite Steward’s ties to the Seawolves, where he played his college hockey, he’s hoping the Huskies find two wins after their road trip to Alaska, where the Huskies won 3-0 and tied 0-0, losing the second WCHA point in a shootout.

“It will be fun to go against them,” he said. “I haven’t had a chance to be on the bench for the two series that we’ve played against them in the last two years. This will be fun to look across and see the green and gould that I once wore from 2000-04.

“In terms of contrast, it’s another hockey game. (I’m) looking at it for our program to come out on top both nights if we can, but ultimately, there are a lot of memories that come for me because of that jersey that they’ll be wearing across from me.”

“The takeaway with them is (that) they’re going to play hard, and we just need to play a little bit harder and a little bit smarter and create offense,” he said.

The Seawolves have rotated three goaltenders through the nets this season, much like the Huskies. Sophomore Kris Carlson has played in 14 games, but has not earned a win yet. Sophomore Brody Claeys has two wins in nine appearances and freshman Kristian Stead has one in 10 appearances.

The Huskies will also host an open skate for children on Saturday after the contest.

“We have so much great support here in this community for the whole athletic department, let alone hockey, so for us to give back and allow the coaches and players to interact with the public in a different way then out at restaurants or at public relations events, this is more of a collective opportunity,” Steward said. “People that come to the games are all supporting what we do, and we’re all in this together.”

Opening faceoff for both nights is set for 7:07 p.m. at the MacInnes Student Ice Arena.