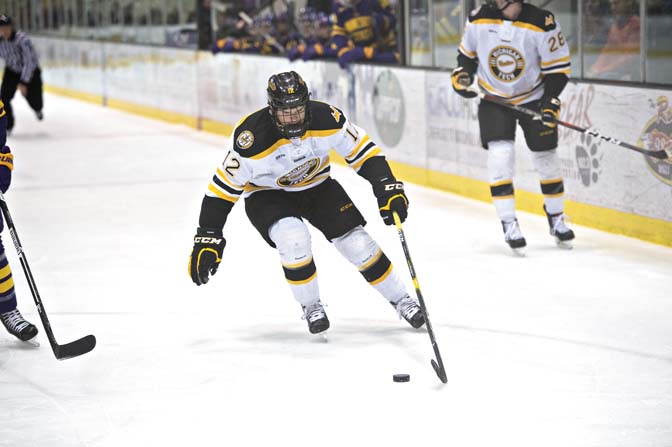 Daily Mining Gazette/David Archambeau Michigan Tech’s Brian Halonen controls the puck in the offensive zone during the third period of a game against Minnesota State Friday at the MacInnes Student Ice Arena.

HOUGHTON — Nearly everything about Friday night’s matchup between the Michigan Tech Huskies hockey team and the No. 6 Minnesota State Mavericks was even, the score, 1-1, the quality scoring chances for much of the night, even the 3-on-3 overtime session.

In the end, the Huskies and Mavericks skated to a 1-1 tie with the Mavericks earning the extra point the WCHA standings thanks to a shootout goal from Chris Van Os-Shaw.

Huskies coach Joe Shawhan was mostly pleased with the effort his team gave for much of the night. However, he felt some individual mistakes at key moments cost the Huskies when it mattered most.

‘I don’t know if we deserved to win the game, but we certainly put ourselves in the position to come out with that game,” said Shawhan. “Them scoring in the last minute on a turnover that kind of hurt us.”

Just prior to the Mavericks’ Jake Jaremko finding the space necessary to wind up his speed, drive the net and even the game with 55 seconds remaining, the Huskies’ forwards blocked a pair of shots.

“The guys played hard,” Shawhan said. “We blocked a lot of shots; goaltending was good. The third period got better for us (but) we still have those individual mistakes that cost us 2-on-1’s in the power play (and) breakaways at times. Those are just plays that, one way or another, we have to eliminate from our game.”

In addressing the Huskies’ Blue Line Club prior to the contest, Shawhan mentioned that he and his staff have been trying to get the team to understand what it means for them to play for each other. Several hours later, he was pleased with the results, despite the tie.

“I’m very proud of the effort that they guys gave,” he said. “There was definitely a commitment to playing for each other and I was proud of that effort.

“We have to find a way to minimize those individual plays that cost us. That’s kind of where we’re at. Guys just have to continue to work hard (and) continue to get better… We have to grow.”

Shawhan singled out the efforts of goaltender Matt Jurusik. The junior transfer, who came in riding a two-game shutout streak, played well in shutting out the Mavericks for 59:05.

“I’m very proud of the game we got in goal,” said Shawhan.

Jurusik made some key saves throughout the night, most notably halfway through the second period when Michigan Tech was a man down due to a two-minute penalty by freshman defenseman Colin Swoyer.

“We battled, we competed,” Jurusik said. “In the first couple periods, we didn’t really win 50- 50 pucks, but after that I think we buckled down. It was evident in overtime that we outshot them and we had a majority of the pace.”

The goaltender, who in his first season with the Black and Gold, admitted that having stretches where he is not seeing consistent work is never easy.

“It’s alway a mental challenge,” said Jurusik. “That’s probably the biggest part of goaltending, but I have a couple of key catch phrases to keep myself in the game. It’s a tough position mentally but you learn to deal with it.”

Jurusik said he never felt like he got uncomfortable with what was happening in front of him.

“Early in the game,” said Jurusik, “early in overtime, I thought I made some good saves, I didn’t think I was scrambling.”

Jurusik made a key save in the first overtime frame with his glove that helped carry the game into a shootout, giving Michigan Tech an opportunity to get an extra point.

“It was just bouncing puck that went left to right actually, and then came back to the left,” said Jurusik. “I just knew I had to get a piece over there, so I threw everything I had at it and, most importantly, it gave us a chance to get a point in this game and that’s what’s most important.”

“He kept us in the game and got us a big point,” said Shawhan. “That point might prove big at the end of the year, you never know. We’re in a battle right now trying to get home ice. Three points would’ve been good but he gave us a chance to get one. I thought he was absolutely tremendous.”

The Huskies broke open a scoreless tie 4:24 into the third period shortly after a faceoff on a man advantage. Junior defenseman Keegan Ford and freshman defenseman Colin Swoyer worked a give-and-go along the right side of the rink after the draw, which pulled the Mavericks to the right side of the rink and away from freshman center Brian Halonen. Halonen wound up for a one-timer and blasted a pass from Ford over Mavericks goaltender Dryden McKay’s left shoulder.

“It almost was enough for us to get by,” said Shawhan. “We have to create more offense than that, but it was really good to get that goal.”

Mavericks coach Mike Hastings pulled McKay with over two minutes left in regulation and was rewarded for his ingenuity when Jaremko found open ice and buried the tying goal.

“It was really important because I thought we had some good opportunities,” Hastings said. “I give him (Jurusik) credit. He did a great job at not leaving a lot of rebounds. We were just trying to find a way to make it to the net, kept it in and made a (good) shot to beat him.”

Hastings knew, coming in, that tying to beat the Huskies during Winter Carnival was a tall task and he felt that his team reacted to the situation about as well as they could.

“I thought that was a really good hockey game,” said Hastings. “We found a way to stay in there and found a way to tie it up. I thought both times had opportunities throughout the back half of the game to score and both goalies did a real good job.

With less than 24 hours until the two teams meet Saturday, Hastings was already planning his team’s recovery.

“Right now we’ve got to  get some rest,” said Hastings “This is a quick turnaround. They’ve got to turnaround real quick also. For us, I’m expecting the same tomorrow.

“It’s always is a battle when you come to this building and during Winter Carnival, especially. It’s very difficult to get a win, so we’ll take the tie and the extra point in league standings and get our rest looking forward to tomorrow.”