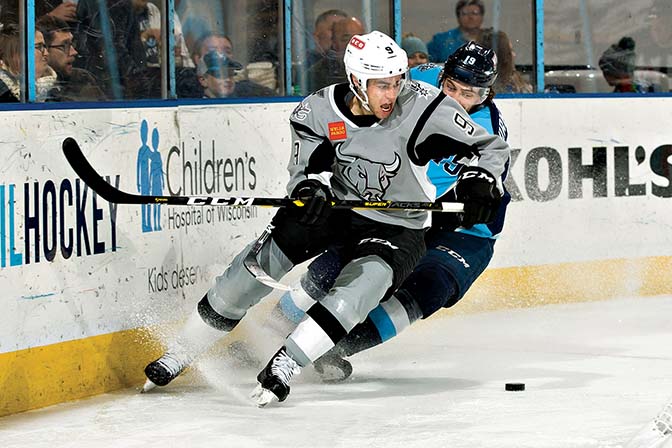 Photo courtesy of the Milwaukee Admirals San Antonio’s Mitch Reinke fights off a check from Milwaukee’s Justin Kirkland. Reinke set franchise records in goals, assists, points, and power play goals by a defensenman for the Rampage this season.

SAN ANTONIO, Texas — Stillwater, Minnesota, native and former Michigan Tech defenseman from 2016-18, Mitch Reinke had a record-setting season for the American Hockey League (AHL)’s San Antonio Rampage. The Rampage finished their season on April 13 with an overall record of 31-38-6-1, which was for 8th place in the Central Division.

Despite a tough season as a team, Reinke set new team highs in multiple offensive categories while scoring 12 goals and 33 assists over 76 games. He was also recently named to the AHL’s All-Rookie Team, as the league recognized his efforts.

“I think it went good,” Reinke said. “We didn’t have as much success as a team as we would’ve liked to have had this year. Personally, I think I had a great year and developed well. I just want to continue to build on those things that I started to this year.”

Not every player can make the transition from the NCAA to the AHL and immediately find success, but that is just what Reinke managed to do.

“I just look at my first year as a whole. I was able to do a lot of things that I didn’t really expect myself to (do). I think (coming into the season) I just came in and played every night and earned a steady spot in the lineup.

“Early on, I was able to do that and I was able to build throughout the year. I look back at the year I had, and just some of the achievements I had (with) making the All-Rookie Team and stuff like that. It was a good year for me.”

The teammates you surround yourself with can play a big role in your personal growth as a player. Reinke credits his success to players like Jordan Kyrou, who is also in his first season with the Rampage, bringing in 43 total points last season. Kyrou was a second round draft pick of the Rampage’s parent club, the St. Louis Blues, in 2016.

A veteran who also helped Reinke a lot was winger Jordan Nolan. Nolan, the son of former NHL head coach Ted Nolan, helped keep the pressure off of Reinke by contributing 35 points of his own.

“Honestly, I didn’t get there by myself,” said Reinke. “Your team is everything. We had a lot of skilled players this year like Jordan Kyrou (and) Jordan Nolan, just (to name) a couple. I could name a ton (of teammates), my defensive partner Tyler Wotherspoon. I played with him almost all year. He’s been a pro now for almost five years, so he was able to help me feel comfortable out there. He’s a real steady player.

“We had a lot of guys contribute (so) the better the team does, the more success the individuals will have as well. That’s kind of how it generally goes.”

A standout moment during the 2017-18 season, which was Reinke’s second with the Huskies before earning a professional contract from the Blues after Michigan Tech was eliminated from the NCAA Tournament, for Reinke was experiencing his first NHL game with the Blues.

He reflected on the difference he sees in the AHL and NHL levels of play.

“I’ve only played in one NHL game, but I think it’s different for sure,” he said. “(With) the NHL, (you have) the best players in the world and (in) the AHL, (the players are) still developing to get to that (higher) league.

“It was pretty emotional, definitely surreal. I was fresh out of college, and that’s not something that a lot of people get to do. It’s something you work hard for your whole life. Just being able to do that right away was an amazing experience, but also realizing that (I) have a long way to go and (I) want to do what I can to get there and stay there, I think that’s what I’m trying to focus on now.”

“The NHL (has) so much skill and everyone’s so smart,” Reinke said. “(The) same (is true) with the AHL. There’s so many good players that are really skilled and smart and strong. It’s definitely an adjustment, but hopefully I’ll be able to experience that a little more next year.”

Bridging that gap between AHL skill level and NHL readiness takes a different shape for each player, but Reinke is determined to get better and to keep moving forward. He would like eventually earn a fulltime spot in the Blues’ lineup.

“I think just getting stronger, faster and more explosive,” he said. “You’re playing against guys (that are in their) mid-30s, and they’ve developed a lot of strength. (You have to) be able to play physical against them. It’s a long season as well, so you want to make sure you take care of your body and prepare yourself for the season.”

Earning accolades as a member of the Rampage was exciting for Reinke, but he knows there is still a long way to go.

“It’s nice to be recognized for sure, (but) I wouldn’t say that I’m too focused on it though,” he said. “It’s definitely nice to get recognized for the hard work you put in throughout the year but, at the same time, I’m still not quite where I want to be. I’m still in the American League.

“I’d like to play for the Blues as soon as soon as I can and stick there. I think I’ve just got to continue to stay hungry and continue to work on those (goals).”

In his time at Michigan Tech, Reinke scored nine goals and 35 assists over 76 games. He had some advice for current players who aspire to continue their hockey careers after Michigan Tech.

“I think just realizing that the players that are at Tech are on the right path,” he said. “You can see just with the teams that I was on. I was only at Michigan Tech for two years, but Joel L’Esperance and Matt Roy both played a long time in the NHL this year, and both had a lot of success in the AHL as well.

“(So) just recognize how close you really are, but still how far it is as well, (and) just that (this goal) is in reach. It’s a really great place to play, and I’m really thankful for my time there and how they helped me reach the next level.”

From high school success in his hometown, along with two WCHA championship titles with Michigan Tech, to his first NHL game, Reinke highlighted some stand out moments that have prepared him for his recent success.

“I think, in college, winning two WCHA championships, that was definitely one of the highlights of my hockey career,” said Reinke. “Even going back to high school, we were able to reach the state tournament for the first time, (in) the city of Stillwater where I’m from, and that was unbelievable as well. The support from the community was a lot like Michigan Tech, (with) so many people reaching out, just excitement around the community.

“On a more personal level, being able to sign with the Blues last year and play in my first NHL game shortly after, (and) just having all my teammates able to watch and congratulate me, that was so special as well. It’s been a fun ride and I just hope to keep going here.”