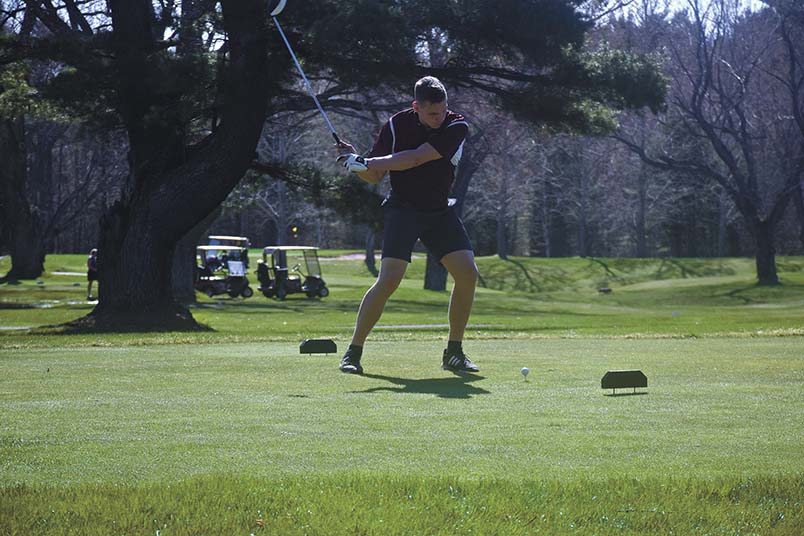 Jamie Glenn/Daily Mining Gazette Ontonagon’s Eddie Polakowski reaches on his backswing on the 10th tee during the Hancock Invite Tuesday at the Portage Lake Golf Course in Houghton.

HOUGHTON — It was the perfect weather for six girls’ and 11 boys’ golf teams to gather for the Hancock Invitational at the Portage Lake Golf Course on Tuesday.

The consistently tough Houghton boys placed first with a team score of 339. West Iron County took second with 340 and Calumet came away with 345 for third place.

Hancock coach Paul Sintkowski’s team is composed of younger players, but the hosts finished the day in fifth place overall with a score of 391.

Of mention for the Bulldogs was defending Upper Peninsula champion Payton Dube, who finished as medalist for the girls with an overall score of 75. Houghton’s Elle Colombe took second with a score of 96. Third place went to Tori Bociek of West Iron who shot 98 on the day.

“This is our second meet,” Sinkowski said. “I have a girl, Payton Dube, she’s my No. 1 girl. She’s the defending Upper Peninsula champion. She won her first meet in Ishpeming and (was) the favorite girl today as well.

“My boys team is relatively young. I think I have four freshman and then I have a senior who is not playing (today). It’s a growing season. I have three girls this season. Now I only need one more and I can post a team. It’s a good game that everybody should play. Girls’ numbers seem to be going a little bit down, but (in) junior golf there’s more, so hopefully that’s a good sign as we move forward.”

With a number of cancellations to start the spring sports season, many golf teams are working to make up for lost time. Sintkowski saw Tuesday’s meet as an opportunity for players from different schools to network and play together early in the season.

“Well, it’s good for the kids because they get to know each other,” he said. “Depending on what number they are, they’ll play some meets together and it’s just good for the kids to play different courses. They get out of their comfort zone. It’s always good to go compete and you want to see how you stack up against other (schools).”

West Iron County sophomore Nate Thomson medaled for the boys with a score of 75. Though he found the first nine holes challenging, he finished that portion with a score of 39, thanks to the nicer weather playing to his favor.

“I had a good front nine,” he said. “(I had a) couple bad holes. The long Par 3 on the back nine was a tough green, so I took a double there and bounced back with a birdie on 18. The front nine always plays a little harder, but I just kept going and finished with a pretty solid score.

“My short game (went) very well today. Other than that, I thought the greens putted very nice. We’ve had two meets so far. The warm weather plays a huge effect into it. You’re not cold (and) your swing is more loose then it would be if you played in the cold.”

Houghton junior Jisung Choi took second place for the boys with a 77.

“(I was) not very good,” Choi said. “I went one over, and then six over on my nines. The puts weren’t dropping today. The putting wasn’t as good as I wanted, and (I had a lot of) chips, a lot of everything.”

Calumet senior Landon Johnson scored an 80 on the day. He sees playing a course so close to home as an advantage.

“It was a bad round,” said Johnson. “Easy course (but a) bad round. Getting to know the course is easier. (I’ve done) pretty bad (so far this seaso). I’ve had back-to-back 80’s. It isn’t good. I’ve got to work on hitting the fairway and read the greens a little bit better. My driving is pretty bad but I guess (my) short game can click sometimes.”