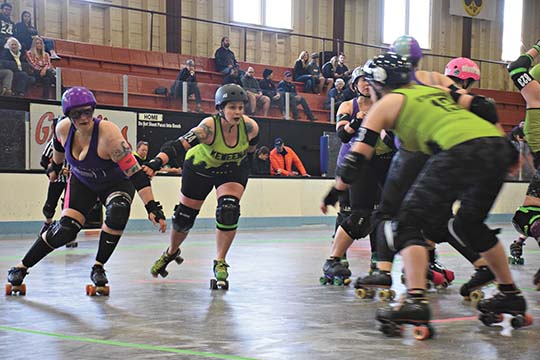 Eddie O’Neill/Daily Mining Gazette Team Unicorn’s “Jostlin’ Hell” puts a move on as she tries to drive around the pack during a bout Saturday at Dee Stadium.

HOUGHTON — The normal sounds of pucks hitting boards and skates scraping the ice at Dee Stadium were transformed into the sounds of wheels hitting concrete and shouts as the historic arena hosted its first flat-track roller derby bout of 2019 on Saturday. The Keweenaw Roller Derby (KRD) team welcomed Team Unicorn from Madison, Wisconsin. While KRD fell in a 190-99 loss, all agreed that it was good to back on skates and in front of an enthusiastic Copper Country crowd.

“It was a fun game, and that’s important,” said KRD captain Terry Frew. “They (Team Unicorn) are a good team and it was nice to have them here. They played tough but fair.”

“This place is amazing,” stated Team Unicorn skater Leeann Behrens. “I wish we could just pick this floor up and the energy of this building and take it home with us.”

This was the hometown team’s second bout of the season. In late April, the ladies from Keweenaw ventured south to Beloit, Wisconsin, and squeaked out a 178-161 victory there against the Bombshells.

It was clear from the start Saturday that KRD had met their match in Team Unicorn. Size made a difference as the team from Madison brought some big blockers to town.

They were not only able to stop KRD’s jammers from getting through the pack, but also able to form strong walls to guide their jammers to the lead and get out of the pack and score points.

In the first half, Team Unicorn quickly skated out to a 38-20 lead and did not look back. In short, they controlled each two- minute jam time and time again as the match rolled on. For every four points Keweenaw was able to put on the board, Madison would tack on 12 easily.

“I was very pleased with the effort,” said Madison’s coach Anna Ironsides. “This team we brought today is a hodgepodge of Madison-area skaters. Some of them have very little experience as jammers, but they got in there and held their own. It was good to see.”

Team Unicorn widened the lead to more than 50 points by halftime as they skated off with an 89-38 lead.

In the second half, KRD picked up their game and strategy as they were able to lessen the lead with some quick skating past Team Unicorn’s tough walls.

“While size has its pluses, it also has its minuses,” said KRD skater Jenn Sams. “I think we had a little more agility and were able to sneak through some of their walls.”

While sneaky moves helped, in the end, Team Unicorn dominance proved to be too much as they skated on to victory.

Saturday was Becky McCarty’s debut on the rink. The Hancock mom is one of several new skaters who made the KRD squad late last fall. To say she was nervous was an understatement.

“I was so very nervous, but I kept telling myself that they are not going to play me much,” she said with a big smile. “I’ll get a little taste of the action and that will be enough.”

She not only got more time than she bargained for, she did not fall down as much as she thought she would. Both were good things.

“There is such a welcoming spirit here on the team. I loved it,” McCarty said.

Next up for KRD is a June bout at home against the Traverse City Toxic Cherries. In the meantime, there is practice and a number of things to fine tune.

“It was good to play a strong team,” said Sams. “We did well, and we are starting to come together and understand where our strengths and weaknesses lie. We have some work to do in practice – among them strategy.”