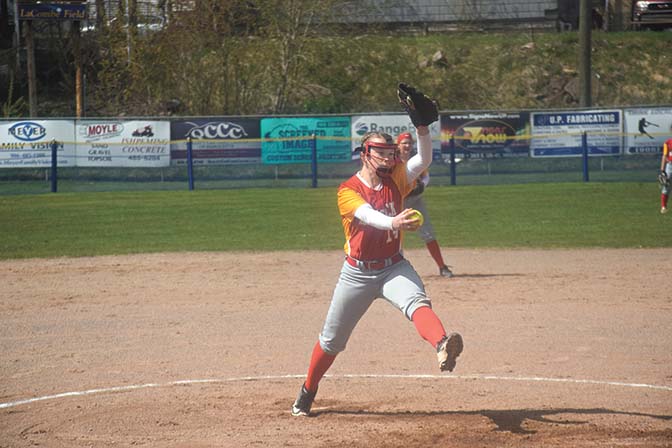 Jamie Glenn/Daily Mining Gazette Hancock’s Delaney Heinonen stretches before delivering a pitch during the first game of a doubleheader with Negaunee Thursday.

NEGAUNEE — The hots Negaunee Miners softball team cruised to a pair of victories over the visiting Hancock Bulldogs at LaCombe Tield in Negaunee on Thursday, 11-0 and 15-0, in doubleheader action. The Miners looked like a much older and faster squad, which proved to be lessons for the younger Bulldogs to learn.

Bulldogs pitcher Delaney Heinonen was hit in the leg off of a deflected ground ball in the third inning of the opener that resulted in a pitching change for them before the team had really settled in.

“Well, we just had a slow start and never really recovered,” said Bulldogs manager Randy Heinonen. “Then when when Delaney (Heinonen) took that line drive off of her leg, we had to pull her out and we just never recovered.”

Katelyn Lammi of Negaunee started things off with a two-run base hit. Abby Nelson hit to the outfield for a double and the Miners quickly had a 4-0 lead in the top of the second inning.

Nelson, Payton Drew and Miners pitcher Cassidy Orr all scored shortly after that for a 10-0 Negaunee lead, bringing about a necessary pitching change for the Bulldogs.

Heinonen saw the matchup as an opportunity for his team to grow.

“We tried to get some other kids in there (to) get some experience,” Heinonen said. “We did that (and) everybody got into the game to play.”

Mackenzie Karki blasted a long drive to centerfield to send Mykenna Kontio home for the final run in the opener.

“I was really happy” said Negaunee manger Randy Carlson. “Hancock (has) a good pitcher and I thought we came out and just hit the ball hard. I think that’s important when you’re playing a good team. You want to jump out early.

“I was just happy (that) we got off to a good start (with) a lot of energy and we just jumped on it early. That was big.”

The two teams took the intermission between games to recognize the senior athletes with Hancock graduating five seniors and Negaunee eight.

“It’s been a great ride with these five young ladies,” said Heinonen. “We’ve had a lot of sucess (with) over .500 records. They’ve helped (to) build the program (and) definitely left it better than when they got it.”

Carlson echoed his opponents’ comments about his own group.

“They’re awesome,” he said. “We have eight seniors. They are unbelievable. It’s going to be really hard to replace (them). Fortunately for us, we have a junior varsity program (with) kids coming, (but) this will go down as probably the best class in our history as far as great kids and great players. We have a lot of kids who are up ready to step up so it’ll be fun.

“It was nice to get all of our seniors out early and so they got a chance to get out there and get an at bat. We’ve got one more game on Tuesday against Kingsford. I thought that was a good tune up against some good pitching.”

Hancock started the second game batting first, but had trouble stringing hits together.

In Negaunee’s half, Karki slide home off a dropped ball, Hannah Voskuhl, Nelson, Orr, and Kontio all scored before the bottom of the first inning was over, giving the hosts a 5-0 advantage.

With bases loaded in the second, a pop up to left field advanced Shaylee Merhennick. She, along with Nelson and Lammi all touched home plate in the bottom of the second inning for an 8-0 score with Morgan Carlson adding one more run before the Bulldogs recorded the third out.

A pop up to right field by Skylar Hall gave Lammi, Nelson and Hall around the bases in the third for an 11-0 lead for the Miners.

Lammi hit a ground ball to left in the bottom of the fourth inning, which set up Karki and Voskuhl. Lammi finished out the night by scoring the final run before the end of the fourth.

“(In) the second game, their coaches said that they (Hancock) had a lot of young girls that he (coach Heinonen) was trying to get in the game,” said Carlson, “that was a little bit more anticlimactic. The first game was going to be the test.”

Both teams look to prepare for one more regular season matchup, Hancock will face Westwood and Negaunee will face Kingsford.

“Now we have some little things that we need to fine tune, (but) overall we’re playing with confidence right now and I just want to keep us rolling,” Carlson said. “We don’t want to lose momentum. We just want to stay sharp and stay focused.”

“So, we have Westwood tomorrow (Friday) for senior day, to finish off the regular season,” said Heinonen. “Then we’ve got some work to do in the hitting cage. We’re going to get ready for Tuesday against Lake Linden in districts.”