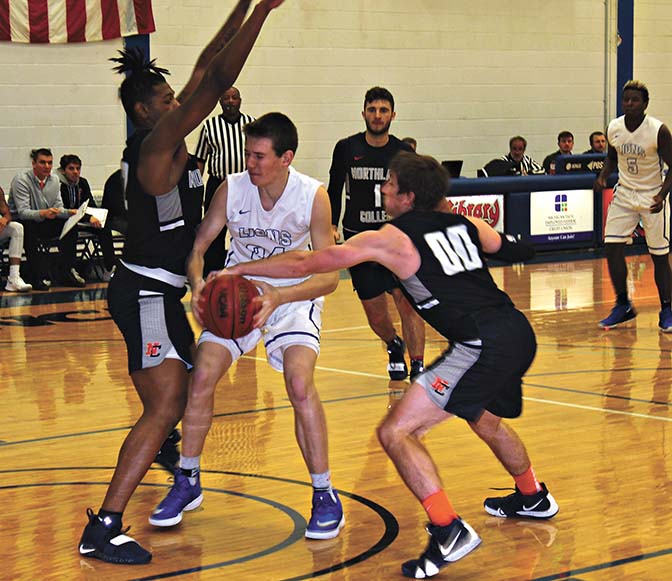 Paul Peterson/For the Gazette Finlandia’s Jaden Janke moves inside in a game against Northland College last season. The Dollar Bay product led the Lions in scoring until a mid-season injury sidelined him.

HANCOCK — After going through a nightmarish 2018-19 season, Finlandia Lions men’s basketball coach Mike O’Donnell is looking strictly to the future.

The Lions lost four prospective starters before last season even began, and a couple of more to injuries along the way in an 0-21 season.

“It was tough right from the beginning when we lost people who would have started (Brandon Robinette and Geof Smart),” O’Donnell said. “Then we had injuries to key people later on …. it kind of snowballed on us.”

Robinette’s loss was felt the most because he had led Finlandia in scoring and rebounding the previous season. Both players left for job offers.

The one injury that probably hurt Finlandia the most was one to 6-foot-5 freshman forward Jaden Janke of Dollar Bay.

Janke was leading the Lions in scoring (12.3 points per game) when he was sidelined in mid-January.

“He (Janke) was coming along and I know he would have helped us to a couple wins late in the season,” O’Donnell said. “Those kind of things happen in the course of a season.”

The Lions recently announced the signing of three prospects, including 6-5 center-forward Alex Richwine of DeTour High.

“Alex has the size to play inside or out,” O’Donnell said. “He’s a strong player who has the physical ability to go inside.”

Riley Hendrickson of Crystal Falls is also coming to Hancock. He averaged 14 points a game for the Trojans last season and shot 84 percent from the free throw line.

“Not only can Riley score, he distributes the basketball very well,” O’Donnell said. “He can help us out in the backcourt.”

Matthew Graves is another new recruit for Finlandia.

The 6-2 Graves hails from Lumberton, Texas, where he averaged 11 points, six assists and four rebounds a game.

“We feel that with some work, Matthew can be a contributor,” O’Donnell commented. “He’s a versatile player.”

A number of other veterans, including point guard Tyler Browning and shooting guard Dylan Underwood, are expected to return.

Sophomore Jamal Deshields-Beard is another player who looked good after joining the team at mid-season. He hit double figures in several games.

In addition, there are a couple of other former players who missed last season who could return next year.

O’Donnell indicated he’s still recruiting and hopes to land an inside player to replaced the graduated Austin Carlson.