Shutout: Rajala’s Kitchens holds on to shut down Xpress Self Storage 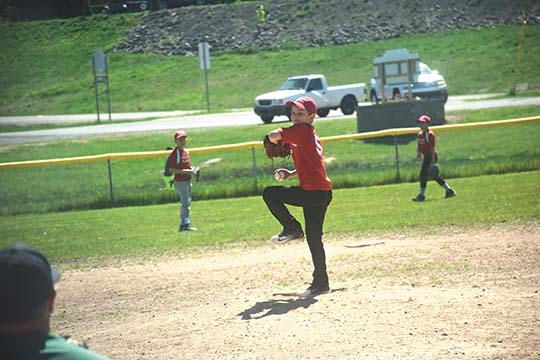 “It was a real fun game (because) we hit the ball” said Rajala’s Kitchens manager Bruce Heltunen. “It was our best hitting game of the year so far. We had Blake Heltunen. who (had) three RBIs and Jared Freeman also had a hit and got on base twice and made a big stop at second base.”

Max Nordstrom hit a fly ball to left field for a double and bring Brycyn Nettell home as Rajala’s Kitchens got their bats rolling early.

“All across the board, up and down, we got hits from the top of the order to the bottom of the order,” said coach Heltunen. “We got hits and some really good pitching (along with) some phenomenal fielding.

“Max Byor, caught (a) ball out in the outfield. He’s a minor He’s a machine pitch player (who) who moved up today for the game and made a big play.”

Paige Nettell got things rolling for Rajala’s in the second inning as she drew a lead-off walk. Freeman and Byor both singled to load the bases with Connor Helminen stepping to the plate. Helminen drew a walk, which put Rajala’s up, 2-0.

“It seamed like we were fired up for the warm weather,” coach Heltunen said. “Everybody came hydrated, drinking lots of (fluids), so the kids were just fired up to play on a beautiful day.

“It was a fun minor league game. The boys are going to take tomorrow (Sunday) off and the next game is on Monday.”

In the third, Rajala’s threatened and then followed through on that threat shortly after as Blake Heltunen walked and later scored after Paige Nettell, Carter Wuori and Freeman all walked, which forced Heltunen to take home plate.

Andy Moyle, assistant coach for Xpress, saw the loss as an opportunity to practice and improve in baserunning.

“Today, we had an off day,” he said. “We didn’t connect everything that we needed to. We played alright, but we just didn’t play good. We can play a lot better and that’s what we’ll do next time.

“We’ve got to touch up our throws to the (players) who are at the base to get the out, that are ready to catch it and are were they need to need be.”