Houghton falls in Over 50 softball to South Range 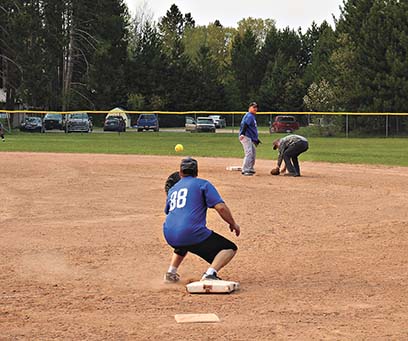 Paul Peterson/For the Gazette Chassell first baseman Jim LaChance waits for a throw in Thursday’s Over 50 Softball game versus Tapiola.

Range scored a 10-8 win in the battle of old foes in a game that featured several lead changes.

Joe Rossi was the winning hurler, with Scott Madajewski taking the loss.

Chassell moved into second place with a 13-4 win over Tapiola.

Fehringer was the only Tapiola, 0-7, player with two hits.

Steve Giddings was the winning pitcher, Len Juntunen took the loss for Tapiola, which held a 2-0 lead going into the fifth inning.