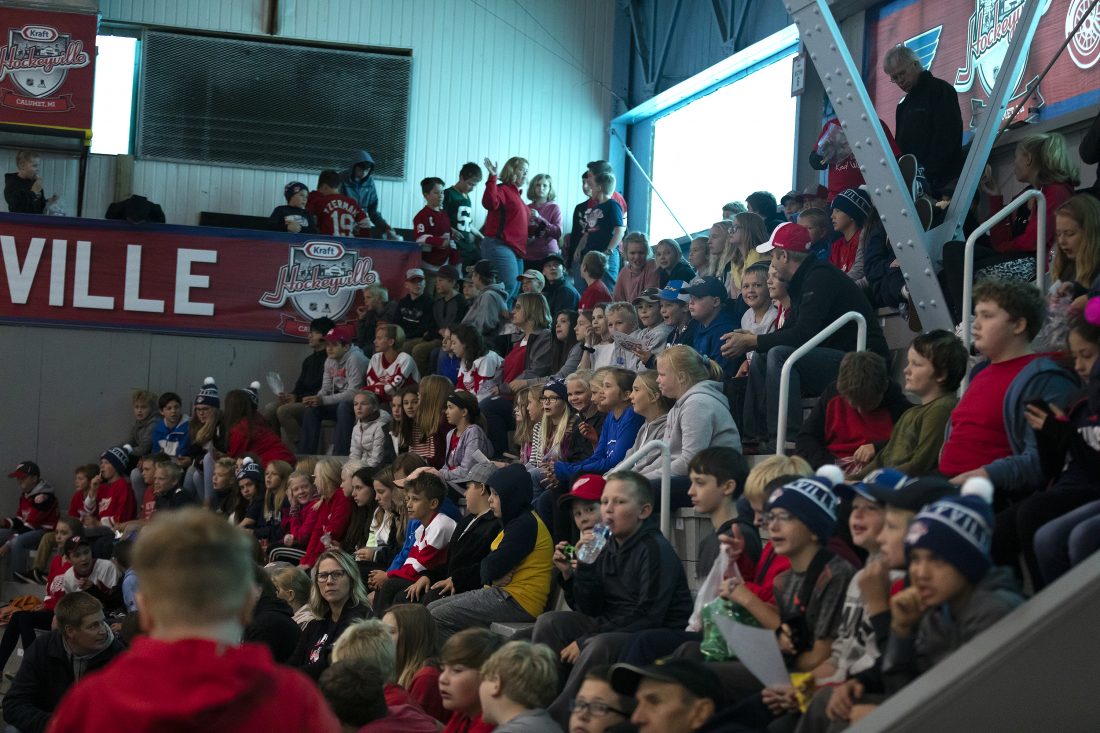 CALUMET — The Calumet Larium Keweenaw School District made history on Thursday. They played a district-wide “hooky.” In fact, students from K-12 were allowed to skip classes with the blessing of their superintendent, Chris Davidson. In his eyes, it had to done because yesterday was not just another fall school day in the Keweenaw. It was Game Day – as in Kraft Hockeyville Game Day – as in Detroit Red Wings vs. the St. Louis Blues NHL Game Day.

“I was contacted a month or so ago by the organizers who wanted to know if we wanted the kids involved in any of the Hockeyville events,” Davidson said. “I said, ‘yes,’ of course, but I was also adamant that I wanted to get all the kids involved some how and some way. Hockey is such an integral part of our community and we might never see a game like this again.”

It all came together yesterday morning at around 10:30 a.m.

First came the elementary school students who walked single file over to the Colosseum and cheered and screamed as loud as they could for the Blues and then the Red Wing players as they got off their buses. The players were gracious with their time as they made their way up the “red carpet” and into the building as they signed homemade signs, construction paper and lots of pieces of clothing along the way.

Then they were joined by Calumet’s middle and high school students who came to watch both teams go through a game-day skate that lasted till around 1:30 p.m.

“While it is my job as a administrator and educator to minimize distractions to the learning environment, I am not sure if I would have a job or even be alive if I didn’t let them participate,” said Davidson with a smile. “It’s a chance of a lifetime.”

As the Blues took to the ice an impromptu “Mitch Reinke Fan Club” quickly formed at the glass behind the benches. Reinke, a defenseman, played hockey at Michigan Tech from 2016-18 and is now with the Blues.

“We made a sign that said ‘Reinke Rocks!’ and he signed it this morning,” said the fan club’s unofficial spokesperson, Olivia Kilpela. “He even smiled and looked at us when we banged on the glass.”

On the Red Wings side, Dylan Larkin was the favorite among the younger crowd.

“He is the best,” exclaimed Milia Sturos. “We were trying to get a picture with him.”

Dominic Nicely, a middle schooler at Calumet and a bantam hockey player, said he liked watching the Red Wings practice.

“They can really shoot,” he said. “They really reach back and get more of a wind up so their shots are harder. It is hard to believe that they are going to be playing on our ice.”