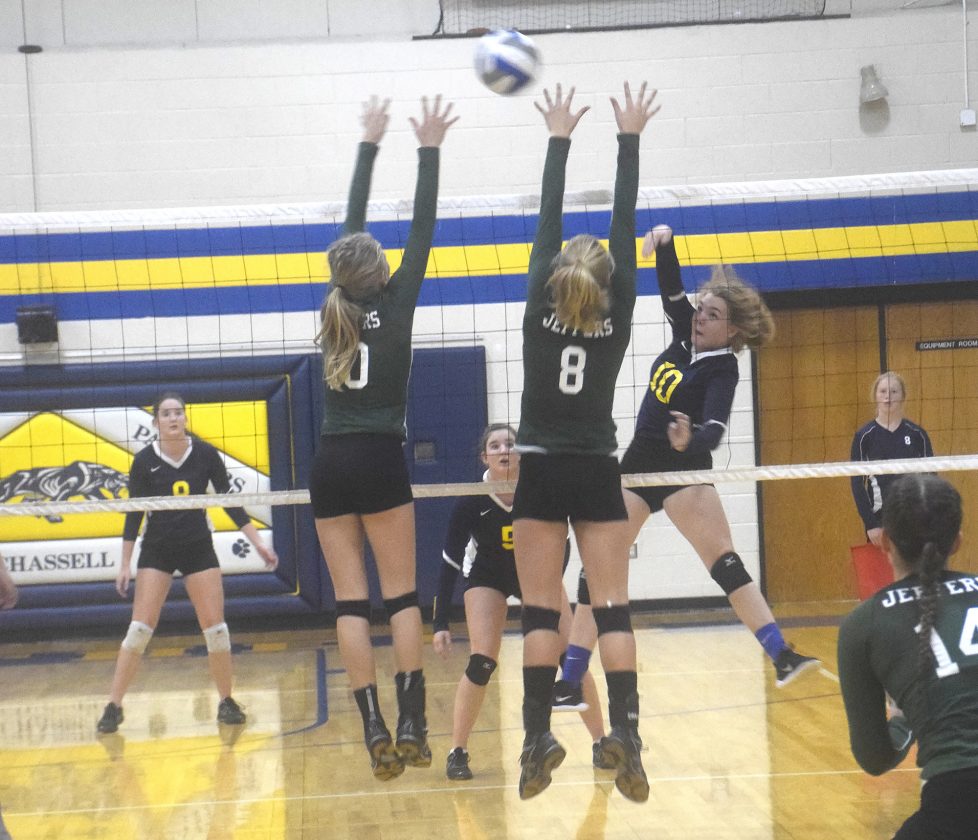 CHASSELL– It was a back-and-forth battle for most of Friday night’s volleyball match between the Jeffers Jets and Chassell Panthers.

“It is a big rivalry game and they (the Jets) got inside of our girls’ heads, and that’s what won them the game,” said Chassell head coach Karli Michaels. “The Jets are a great team but as you saw we were right there with them. Our spirit and mood on the floor is something we are going to have to work on.”

In the first set, the Jeffers’ Jersey Hoover launched the Jets off to an 8-4 lead with a service run of six in row. That soon turned into a 20-18 lead for the Jets but Chassell came back and tied it at 21. However, they couldn’t advance any further as the Jet’s Marissa Nordstrom ended the first set with two aces and the 25-21 win. She had 10 aces on the night.

“I thought both teams came out swinging strong but we were able to dominate their weak spots and put the ball in their open corners,” said Jeffers head coach Rachel Torp.

In the second set it was Chassell’s turn to take the lead. They led 19-16 at one point but had a couple of balls hit into the net and the game was tied at 20 and eventually won by a determined Jet’s squad.

“I liked how the girls rallied back and fought to find those open spots,” Torp said. “I was pleased at how we were able to control the ball and set up some good offensive plays in that set and not just getting the ball over.”

Michaels thought her Panthers best set was the third. In that set, the Panthers took the lead, lost the lead but came back to win the set. They moved out to a 6-3 lead but the Jets roared back to tie it at 10 with Lilly Turner on the line firing off hard serves. It was then tied at 11 and 14. The Jets then pulled ahead with a 16-15 lead but not for long. Chassell’s Katie Huhta put up some consistent serves and moved the Panthers to a 23 -18 lead and eventually the victory.

“There was a lot of communication in that set and the girls played as they know how to play,” said Michaels.

On the defensive side Warren led with 12 digs. Katie Huhta followed with seven.

However, Chassell’s momentum was short lived. When the fourth set rolled around, the Panthers fell back into old habits and lost an 8-5 lead. They struggled to play with consistency according to Michaels.

I saw some things that I liked on both sides of the net tonight,” she said, “but we just are not consistent. We would get the ball and have a chance to put some points on the board and then we’d hit it it into the net. We need to figure out how to balance our play on both side of the net.”