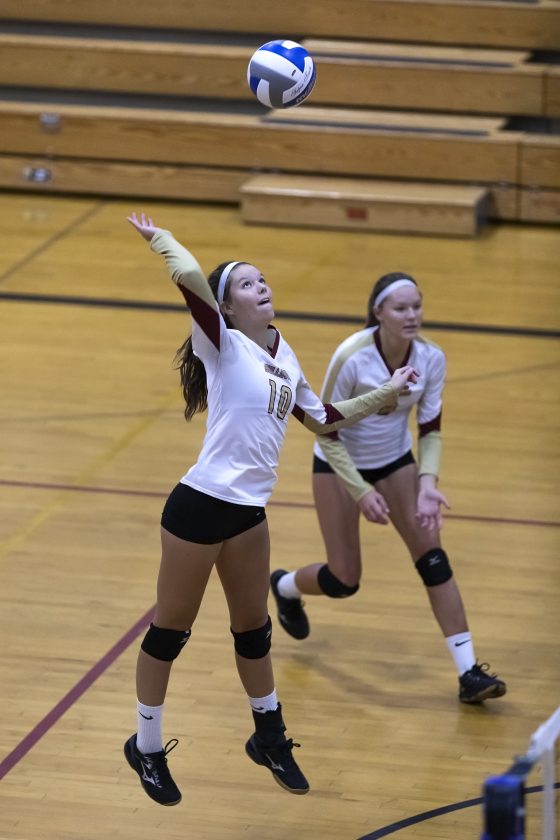 HANCOCK — There wasn’t much of a surprise about Hancock’s rolled Dollar Bay-Tamarack City in a three-set sweep on Tuesday.

The only real surprise for Hancock, against the young Blue Bolts, was a close two-point victory in the second set.

“Tonight I think we played good volleyball in the first and third set,” Heinonen said. “I think in the second set we got a little lazy and we didn’t play the volleyball that we’ve been working so hard to play. I think coming out in the third set and finding our game again, that’s important. Everybody has a few off. Overall I was really proud of the first and third set and how they came in and took care of business.”

Heinonen said last week the team focused on defense to start the season. The Bulldogs had 19 digs alone on Tuesday from Laura Fenton. D’Andra Kero had 12 digs.

The Blue Bolts, composed of one senior and two juniors, also raised their level of play in the second set, hanging within a point of Hancock throughout the set and also grabbing a three-point lead a couple times. Dollar Bay led as late as a 23-21 before the Bulldogs rallied for the win.

“That momentum is the game of volleyball,” Dollar Bay head coach Martha Storm said. “For them, the second set they realized we can play with them. They don’t realize it until they see the scoreboard. I was really impressed in the second set. I just wish we didn’t give up on ourselves in the third set. They stepped it up that second set on serve and serve-receive.”

The Bulldogs cruised in the third set to an early 7-0 lead and finished out strong for the sweep.

Hancock has been working lately on speeding up its offensive game, Heinonen said. And she liked what her team was able to do against the Blue Bolts.

“That was a little better tonight. I think that’s something we need to work at is getting faster on our offense,” Heinonen said. “I think in the first and third set we had very limited errors and we started to speed things up. We were smart yet taking care of the ball.”

Kero led the Bulldogs with eight kills. Marina Kero had six kills, along with five each by Payton Dube and Jordan Pertile.

The Blue Bolts have four sophomores and two freshmen on the team. And their youth and inexperience has shown so far this season with a loss to Chassell on Monday. Dollar Bay has battled with serve-receive errors and missed hits. But the Blue Bolts found rays of hope on Tuesday by winning a couple long volleys and playing the Bulldogs strong in the second set.

“I know these girls want to win, win, win,” Storm said. “I tell them we have to take more than that with us. These girls are learning so much and we’re building the program. Lexie Turner, she’s one of our captains and she’s doing awesome. She takes on the role of being a role model for all the young girls. The young girls pick up a lot and they’re playing at a varsity level and they’re freshmen. I’m impressed.”

Hancock plays at L’Anse on Thursday. Dollar Bay plays in the Baraga Invite on Saturday.