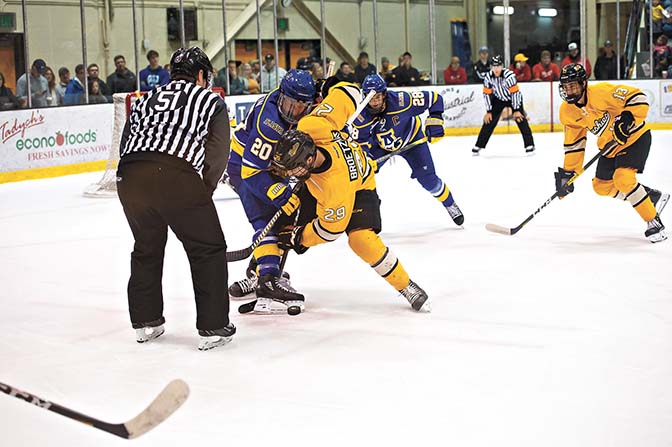 HOUGHTON — Alaska scored first and had the last laugh with a 2-1 win Saturday in a weekend sweep over Michigan Tech.

The Huskies (2-2, 0-2 WCHA) struggled with the breakout and puck possession as the Nanooks took a 2-0 lead in the second and held off Tech’s gradual offensive pressure the rest of the game.

“I liked our intensity right off the bat. All of a sudden it get into a special teams battle, going back and forth,” Alaska head coach Erik Largen said. “It’s hard for either team I think to get into the rhythm of the game. I liked our jump. We got contributions from some guys that maybe don’t always get on the scoresheet or recognized – the (Troy) Van Tetering line, helping with both of those goals. It was good to see.”

Van Tetering and his linemates Logan Coomes and Kyle Marino, on the fourth line, were key with the Nanooks’ aggressive 2-3 forecheck with a defenseman pinch, Largen said.

“Obviously there were questions coming into the year about our offense,” Tech forward Alex Smith said. “We didn’t score enough. You gotta score more goals to win in this league. We’ll look to improve on that aspect of the game.”

Tech was 0 for 8 on the power play Saturday, after going 0 for 5 on Friday.

“Generated more chances. Got a little closer,” Michigan Tech head coach Joe Shawhan said. “Slowed it down a little bit. That comes down to personnel. They’re getting looks and things like that. It’s just gotta get better. Gotta work at it.”

Smith said the team cannot use penalties as an excuse for struggling to find offensive rhythm.

“I don’t know if it’s that. I think it takes you out of the flow of the game a little bit, but that’s no excuse,” he said. “Both teams took a lot of penalties this weekend and they seemed to do OK.”

Alaska (2-2, 2-0) took the lead five minutes into the first with Tristan Thompson’s one-timer slap shot from the blue line, with assists from Roberts Kalkis and Marino.

The Nanooks’ Chris Jandric scored four minutes into the second period, with assists from Antti Virtanen and Marino.

“Just a gut feeling,” Shawhan said. “… Neither of the goals were Matt’s fault. I just thought it was a good time to give another goaltender, early in the year, a chance to get in and use that opportunity.”

Michigan Tech answered later in the second with a shorthanded goal by Logan Pietila, his first as a Husky. An Alaska defender stumbled and lost control of the puck and Pietila took it in for a breakaway and deked to his backhand before flicking it past Nanooks goaltender Gustavs Grigals with seven minutes to go.

“I just came down, made a move and put it in,” Pietila said. “Kind of depends on the goalie, but I like to go backhand and I saw it open, so I went for it.”

Grigals finished with 23 saves on 24 shots, including some key stops in traffic as Tech generated more pressure in the third period.

“He had to make some huge saves in the third,” Largen said of Grigals. “They came back and pushed and had the power-play chances. Even 5-on-5 had a couple good looks. It’s one of those things. That’s the game of hockey. They’re gonna push back. They’re on home ice. We knew that. It’s getting a timely save, getting a timely block. Fortunately we got that this weekend.”

Both teams combined for 19 infractions and 60 penalty minutes.

Michigan Tech’s Trenton Bliss was given a game misconduct and a five-minute major for spearing late in the third period.

The infraction put Tech a man short and forced Shawhan to pull Beydoun from goal for the final minute as the Huskies skated even strength, looking for a tying goal that never came.

Alaska’s Max Newton was given a game misconduct for contact to the head, with a blow to Brian Halonen after the end of the second period. Halonen took a pass as time expired and shot the puck into the Nanooks net. Newton came from behind the net and hit Halonen in the back of the head.

Largen did not disagree with Newton deserving a penalty, but said the five-minte major was “a little extreme.”

“I could see matching minors but at the end of the day they gotta do their best job just like we gotta do our best job,” Largen said. “That’s the way they called it.”

Shawhan said he considered asking the referees to review whether the goal actually went in the net before the clock expired.

“It was bang-bang. I was probably wrong, but I was actually thinking to ask them to take a look at it,” Shawhan said. “It happened that quick, but it did seem like it went in after the buzzer. But it wasn’t like it was blatant. He’s already in the process of shooting and he shot it. It just led to what it led to.”

Despite Alaska’s forecheck stifling the Huskies most of Friday and Saturday, Shawhan said positive takeaways from the weekend included the young team finding more even-strength offensive pressure and scoring chances on Saturday.

“We had more balance in our lines,” Shawhan said. “We got good play out of, if anything, our top line was least productive as far as really consistently getting things done for us. I think there’s a lot of good things.”

Among the other good things was the season debut for Beydoun in goal, as well as freshman defensemen Brenden Datema, who showcased a heavy slap shot.

“We knew he could hit it and he can hit it,” Shawhan said of Datema. “Hopefully he’ll be a weapon in the future.”

Michigan Tech is off next weekend and visits Bowling Green on Oct. 25-26. The Huskies’ next home games are Nov. 8-9 against Minnesota State.