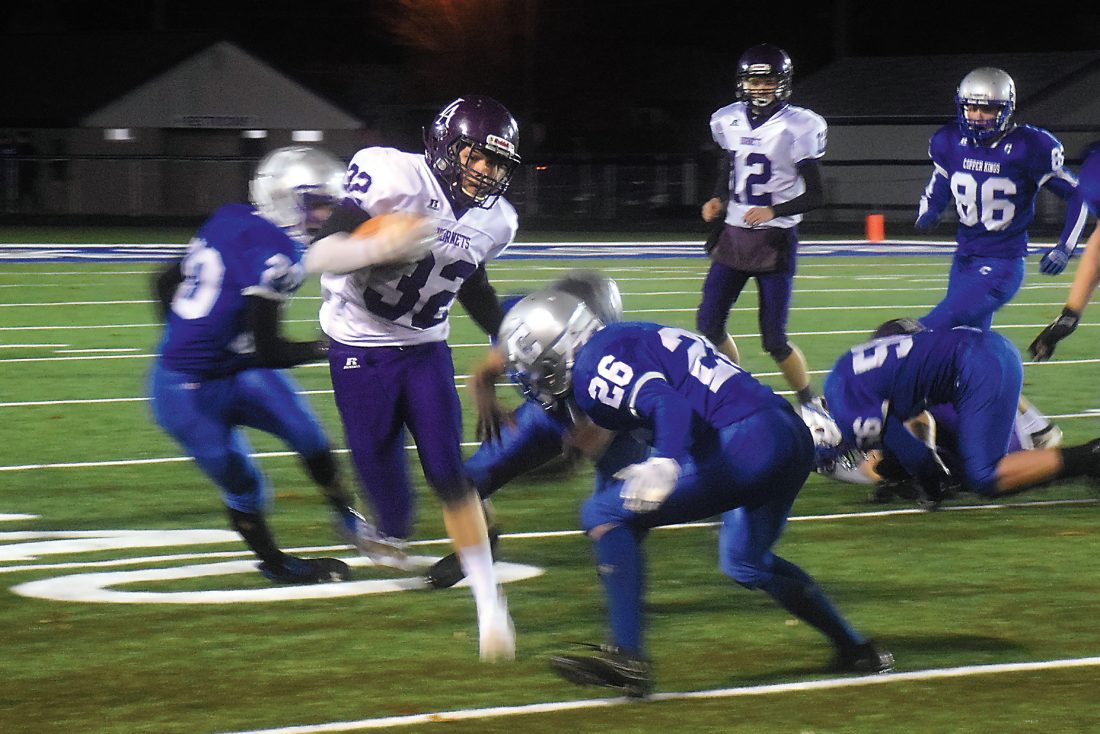 CALUMET — The Calumet Copper Kings ended their regular season Friday night in the same manner in which they began – with a big win.

They closed out the regular season with a 50-28 win over L’Anse.

“It was a nice way to finish our season,” said Calumet head coach John Croze. “We got everybody in with some playing time for our last home regular season game.”

Despite the loss, L’Anse head coach Mark Leaf said that there were a lot of positives in his team’s last game of the season.

“I thought our offense played a heck of a game,” he said. “To put up 28 points against them was good to see. They had our number though on defense as they ran all over us. I am proud of my kids. They battled against a really good team and they fought till the end.”

The Copper Kings (8-1) wasted no time in getting on the scoreboard. The Purple Hornets started with the ball deep in their own territory. However, on their second play of the game, they fumbled the ball and the Copper Kings recovered it. A play later, their running back Nick Djerf punched it into the end zone with a 5-yard run. He did it again for the two-point conversion and it was 8-0 with 11:12 on the clock.

The Purple Hornets (4-5) counter a few series later as they mounted a 65-yard drive that ended with a Jonah Dowd 9-yard touchdown run. They were unsuccessful on a two-point attempt.

At the 5:45 mark in the first, the Copper Kings put up another eight points with a drive that ended with an eight-yard dash to the end zone by Jayden Garipey. It was his first of two touchdowns on the night.

They would score 14 more in the second quarter. It was running back Dryden Nelson this time who found daylight in the Copper Kings end of the field and busted through the Purple Hornets defense for a 68-yard touchdown run at the 6:40 mark.

The Copper Kings led 22-6. Three minutes later, Purple Hornets quarterback Alex Kissel fumbled the ball in the Copper Kings red zone and it was recovered by Calumet’s Lenny Bjorn who ran it in for a touchdown. Nelson was good for the two-point conversion.

With less than a minute left in the first half, the Purple Hornets were able to put up eight points. It was again Dowd with a short run and Terry Reed was good for the two points. As the horn sounded at the mid-way point, Calumet led 30-14.

The second half looked a lot like the first with Calumet dominating on offense. They posted 14 more points in the third quarter and six in the final 12 minutes of the game.

L’Anse put up another 14 points in the second half with two touchdowns.

Scott Loukus led the Copper Kings with 144 total yards on 10 attempts. Nelson followed him 83 yards on four attempts. For the Purple Hornets it was Dowd who led with 121 yards on 29 carries. He had three touchdowns as well. Flash Gagnon followed him with 88 yards.

The Copper Kings will find out who they will play on Sunday in the playoffs. Croze said he and his team will watch the selections together and then it is back to work.

“I am very proud of what we did this year,” he said. “This crew did a great job of maintaining the Copper King tradition.”