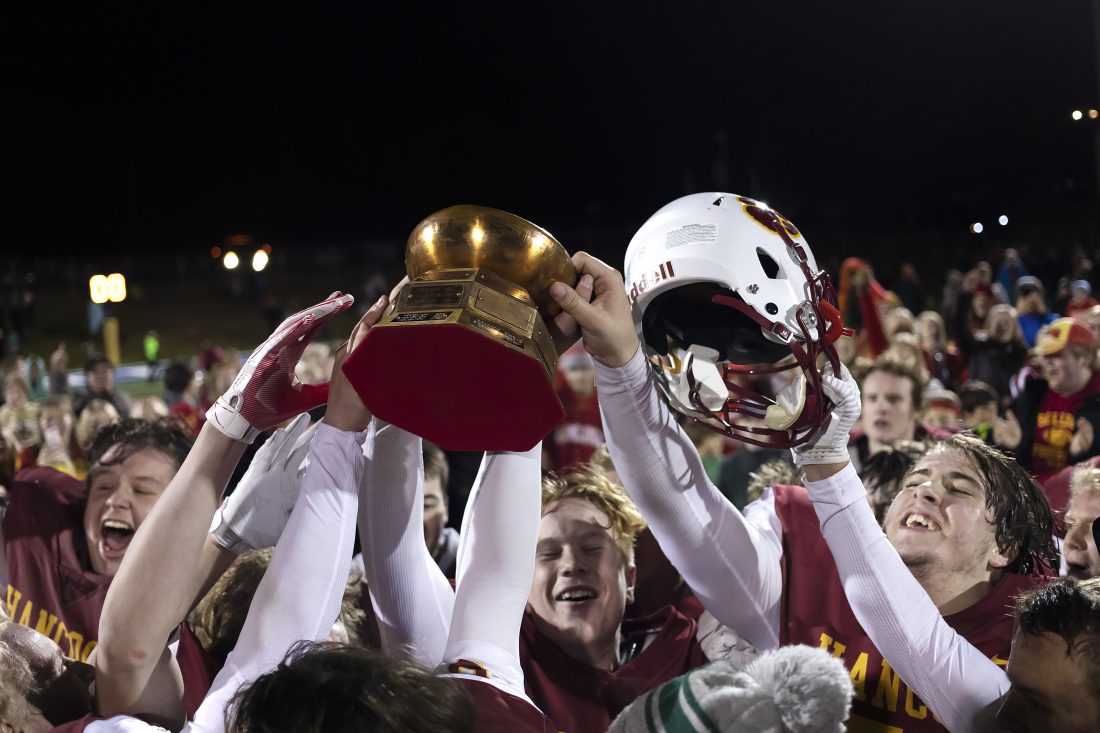 HANCOCK — Hancock seized momentum and put a stranglehold on Houghton, taking the Copper Bowl trophy with a 28-6 win Friday.

Hancock took back possession of the trophy after Houghton won it last year. Both teams have each won the trophy 10 times since 2000.

Friday was the first time Hancock scored at least 28 points against Houghton since a 41-13 win in 2011.

The Bulldogs (5-4) scored in each quarter while Houghton labored to establish a rhythm.

“What a great feeling to win the Copper Bowl for those kids,” Hancock head coach Ramon Sague said. “That was well deserved. They won it in style and they played the game the way that we worked on all year. It was an outstanding effort. We played really well offensively and defensively.”

Houghton (2-7) never got out of its own way. Untimely penalties and turnovers sabotaged the Gremlins’ chances of mounting an answer to Hancock’s momentum.

The Gremlins mounted drives spanning the field, but lost two fumbles inside Hancock’s 10, including one in the final minute of the first half that would’ve narrowed Hancock’s 15-6 lead.

In the end, Sague lifted the Copper Bowl in front of his team and Hancock students who rushed the field after the win. The team took the trophy and some players were moved to tears with the rivalry win.

With a five-win season, Hancock is on the bubble to make the playoffs. Sague said he doubts a playoff appearance, but feels his Bulldogs would be ready if they make it.

“It’d be a miracle if we made the playoffs,” Sague said, “but I tell you what, we’d be dangerous. It’d be a lot of fun.”

The Gremlins’ other fumble came in the fourth quarter, facing a 28-6 deficit. Houghton had the ball at the Bulldogs’ 5. Hancock pounced on the loose ball with 6:59 to play. Houghton never had another offensive snap.

“Hancock played really well and we didn’t,” Huffmaster said. “We went inside the 10 twice and turned it over. Just can’t do that. There were only two possessions each in the first half. Our second one at the half ended up on the 5-yard line with a fumble — not a caused fumble or anything like that. We just messed the play up and turned it over.”

Stats were not available after the game. The Bulldogs’ scoring drives started from around their own 40 and moved systematically. They also used some trickery, with a reverse and a double-pass to spring the Gremlins’ defense and spark momentum. As Houghton waded through penalties and turnovers, the trick plays indeed secured momentum on Hancock’s side. The double-pass was incomplete, but it kept Houghton on its toes.

Houghton received the ball to start the third quarter and tried a double-pass of its own. But the play came on second-and-20 after the Gremlins took a holding penalty. They punted to end that drive, along with twice more on their other drives in the quarter. Houghton’s fumble in the fourth ended its only drive of the fourth.

The Gremlins’ lone successful drive ended with Ty Halonen’s 8-yard run with 7:09 in the second. A two-point conversion failed, keeping Hancock’s lead at 8-6.

“We’ve been a bend but don’t break defense all year. That’s the way we played today,” Sague said. “Offensively we were able to execute today. We were able to throw the ball and run the ball effectively. It was a total team effort. We got everybody to play meaningful minutes, which was very important especially for the seniors. It was a great way to end the regular season.”

Hancock’s Cole Stuber answered two and a half minutes later with a 2-yard run.

Huffmaster said there’s an opportunity for the Gremlins to reload during the offseason and find more success next year.

“I thanked the seniors. We only have six, but we thanked them,” Huffmaster said of his postgame speech to the team. “They carried us a long way from a no-win season two years ago. I told the young guys we gotta get in the weight room and start busting our tails. We gotta be ready. We get a lot of guys back, a lot of sophomores coming up. I think we’ve got an opportunity to be OK.”