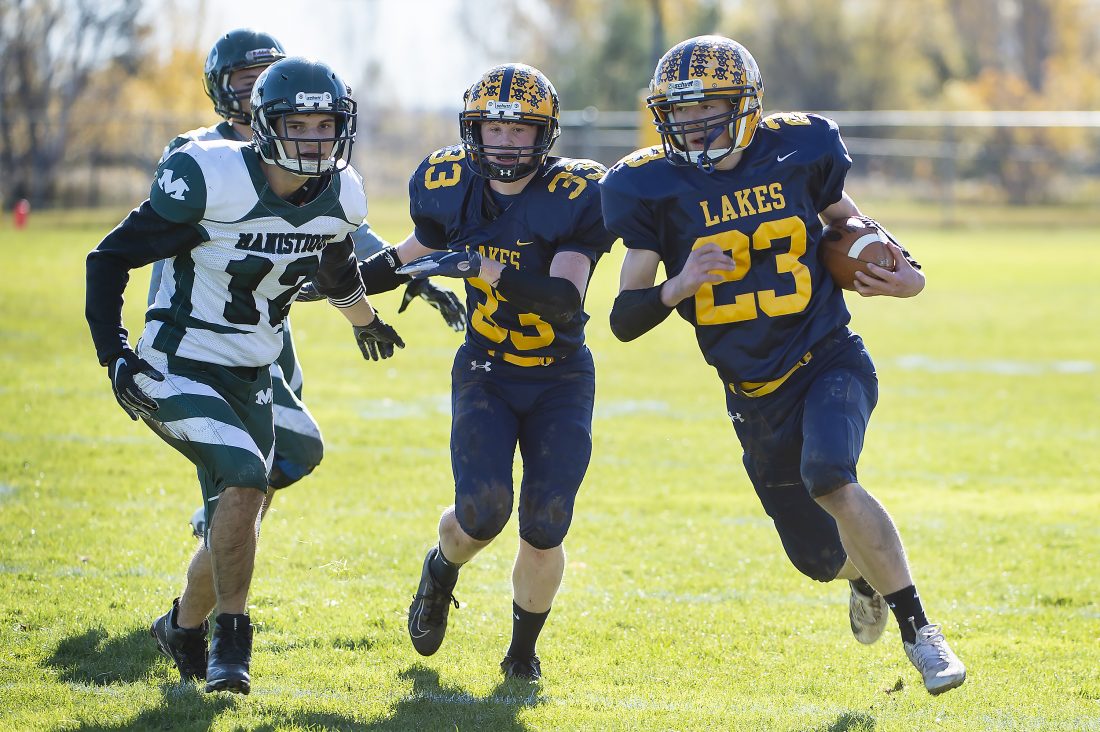 LAKE LINDEN — The Lake Linden-Hubbell High football team may be the smallest Class D school in the state playing the 11-man game, but the Lakes still pack plenty of punch.

The Lakes (6-3) stamped their ticket for the state playoffs Saturday afternoon with a 54-21 win over Manistique at Warner Field.

LL-H coach Andy Crouch said his team will likely meet West Iron County in the postseason, but that things are still unofficial.

“We could end up playing a Johannesberg-Lewiston or even someone else,” he said. “We’ll know more on Sunday.”

In Saturday’s game, the locals cashed in an early break to draw first blood when the Emeralds fumbled the opening kickoff. 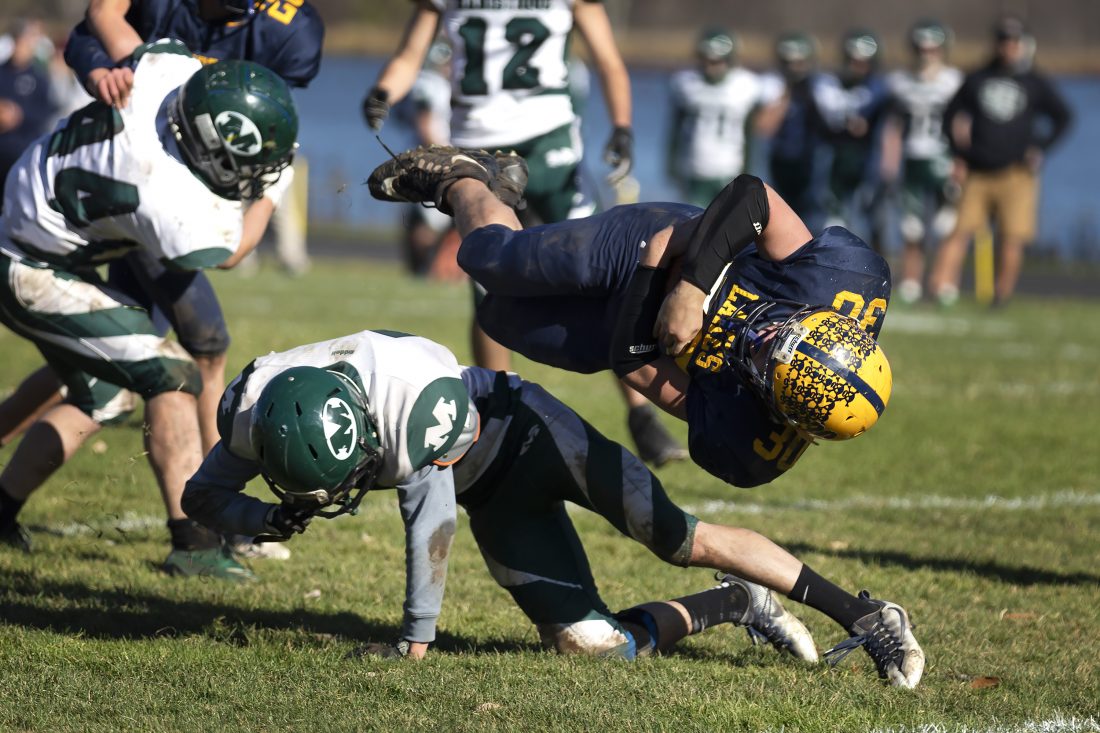 LL-H quarterback Carter Crouch scrambled in from seven yards away to cap a 4-play, 32-yard drive and Jessie Hill added the first of his three-two conversions for the day for an 8-0 score.

Manistique (3-6) answered back behind the running of scatback Schler Andersen, who tallied from three yards away and threw for the two-point conversion.

The Lakes were back on the board not long afterward when Crouch, still playing despite leg problems, tossed a 33-yard scoring pass to Cole Gregoire.

Andersen got that one back when he sprinted 70 yards up the middle. The PAT try failed, making it 16-14.

“(Andersen) is as good a running back as there is in the U.P.,” MHS coach Todd Kangas said. “We just don’t have enough help for him right now.” 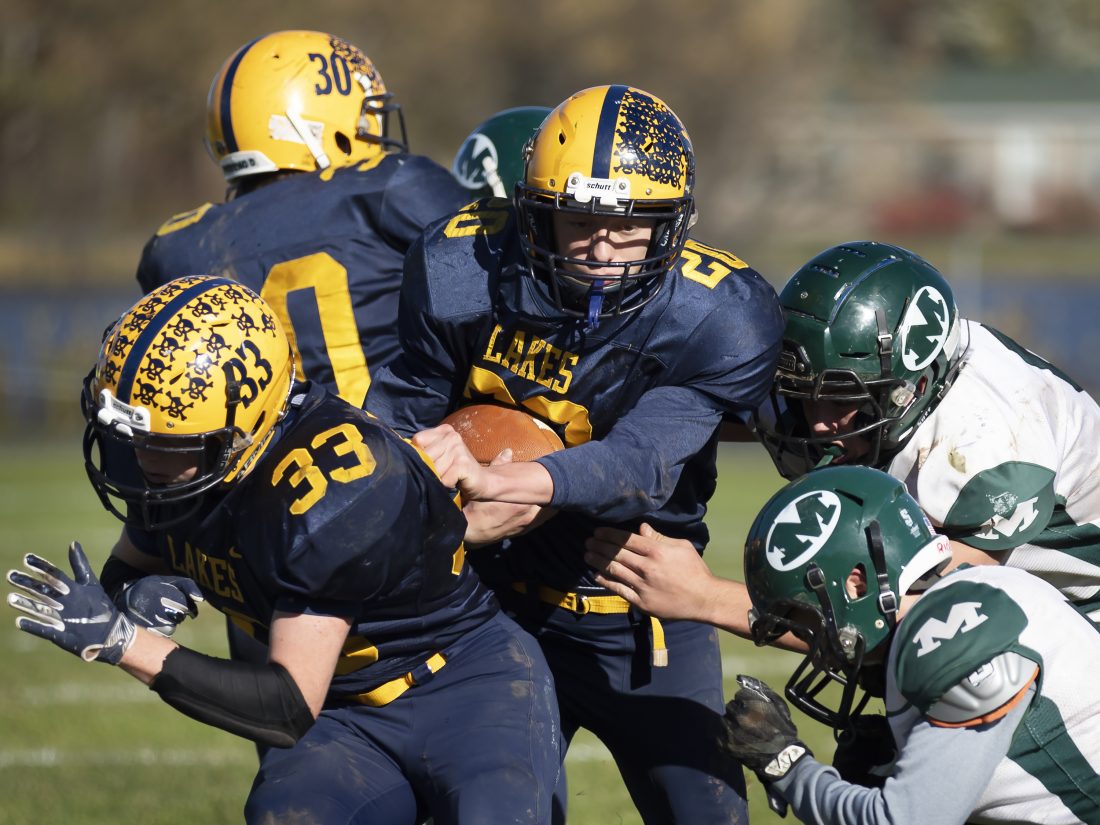 Caleb Klein, who paced the Lakes ground game with 177 yards in 18 tries, scored twice in the second quarter on runs of 28 and two yards.

“We were able to overcome the (first turnover) but it got harder and harder,” he said. “Against a team like Lake Linden. they’ll use those mistakes to beat you. They do what they do on offense and they do it well. They will be a tough out for whoever they play next.”

The second half was all Lakes as they received touchdowns from Hill, Klein and Bode Brinkman. 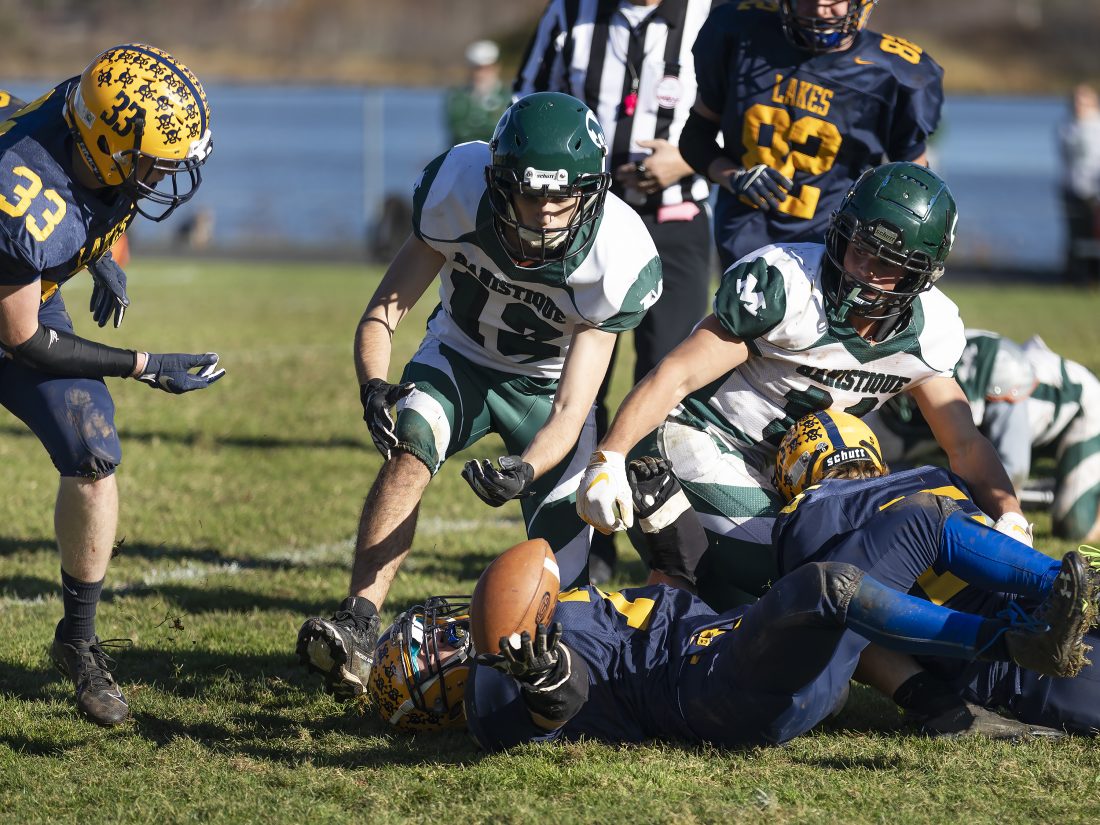 Andersen got a window dressing score for MHS in the closing seconds.

Crouch said he was happy to get the win on Senior Day.

“I was pleased with the way our offense moved,” Crouch said. “Credit to our kids, they handled a lot of adversity this season and I’m proud of the effort they gave.”

As for his son, Carter, who played five games after tearing an ACL before the season began, it was a matter of desire over pain.

“He’s stubborn, like his old man, and he wanted to play his senior season,” Coach Crouch said. “I’m happy he was able to suit up for five games. When’s he’s in there, he gives the other team something to think about. He handled not being to play better than I thought anyone could … he became a coach during that time.” 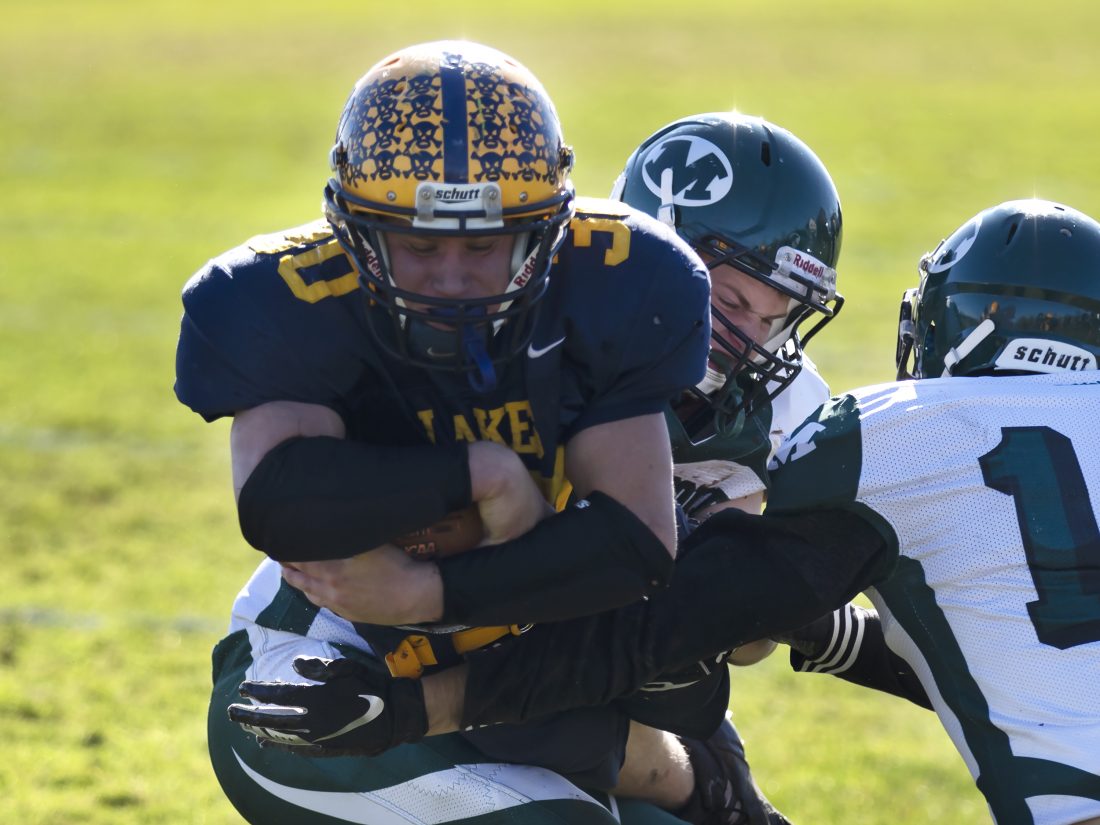 Crouch passed for two touchdowns, passed for a pair of two-point conversions, completed a pass for 33 yards and ran for 19 more yards.

Caleb Gregoire added 96 yards in 18 carries for the Lakes.

Andersen ran for 126 yards and all of his team’s scores. 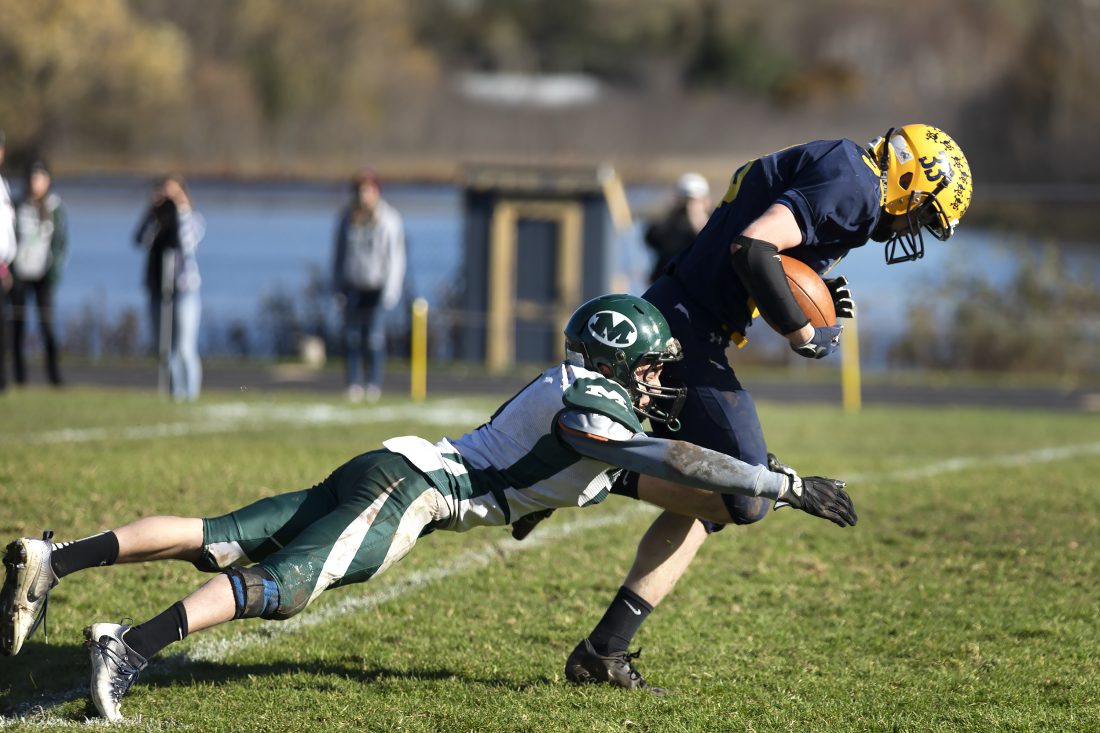 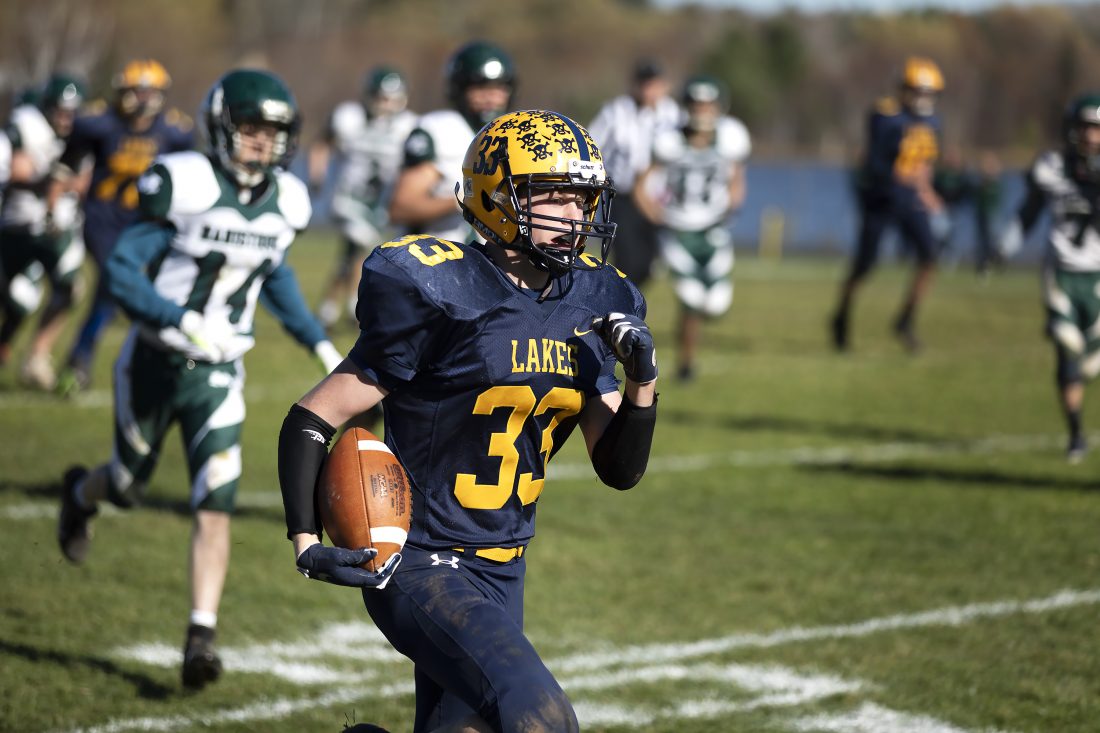 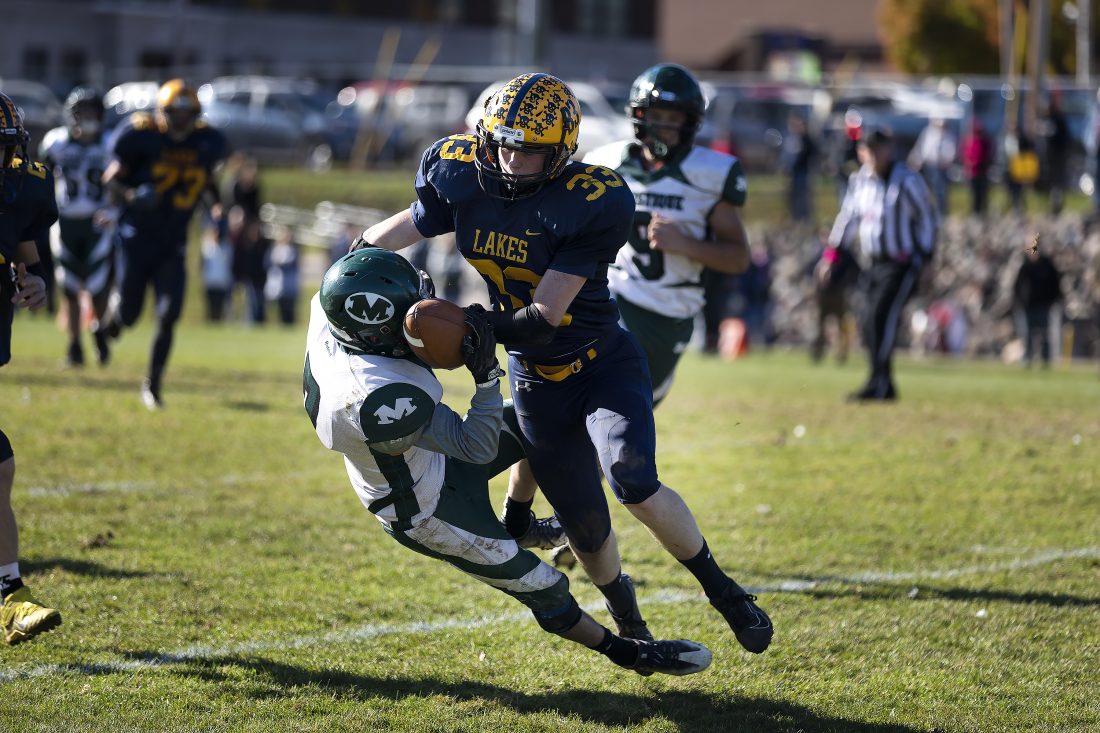