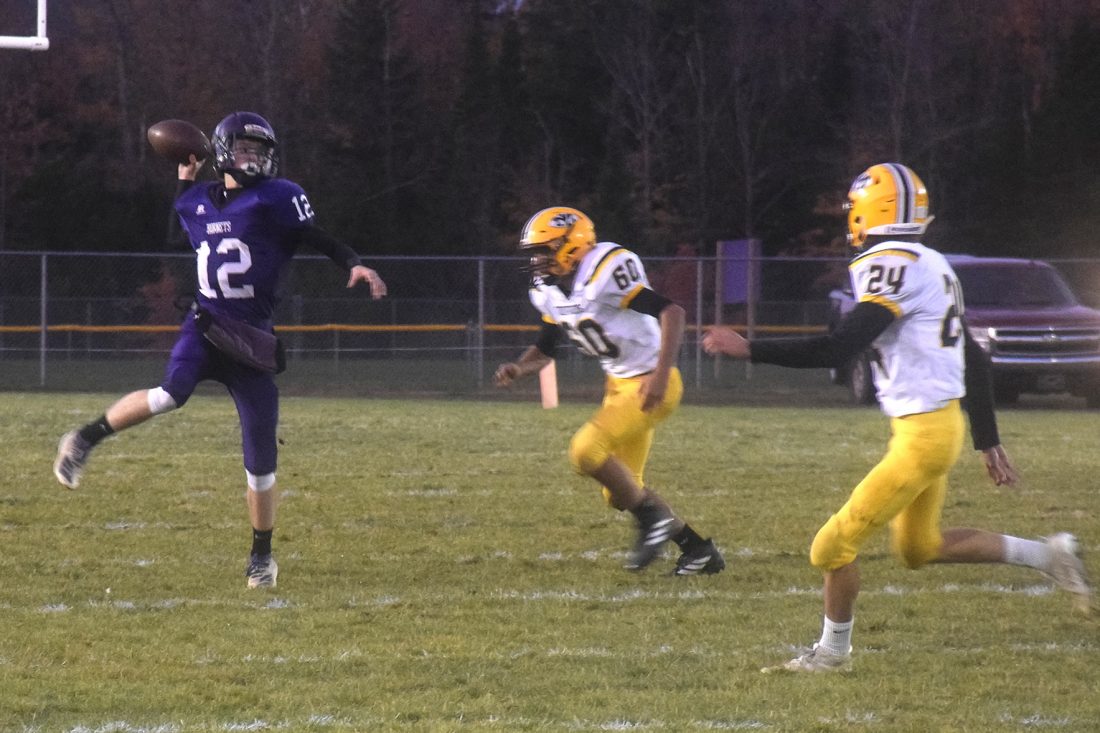 L’ANSE — The Iron Mountaineers moving their undefeated season to an eight game as they thrashed the L’Anse Purple Hornets 51-6 on Friday night.

“I am happy with the win,” said Iron Mountain head coach Robin Martilla. “We were able to spread the ball around. I liked the fact a lot of our guys were able to get in on the action and score some points.”

First to score for the Mountaineers (8-0) was junior Bryce Pietrantonio with less than two minutes to go in the first quarter. After a 64-yard drive down field led by senior quarterback Marcus Johnson the Mountaineers found themselves in the red zone. On second-and-goal, Johnson handed off to Pietrantonio, who found day light and crossed the goal line.

The Mountaineers were also the first to score in the second quarter at the 10:53 mark. Junior running back Caleb Evosevich-Hynes gutted up the middle for 60 yards for the score.

Iron Mountain held the Purple Hornets on defense and took over again at around the 6:40 mark in their own end of the field. They put together a quick drive that put them at in the red zone. Johnson punched it in with a quarterback sneak. They converted a two-point conversion to take a 21-0 lead.

The Purple Hornets (4-4), however, refused to go down easily. After the kickoff, they mounted a 70-yard scoring drive that included a 41-yard run by senior running back Jonah Dowd. That was immediately followed by a 24-yard dash by junior Flash Gagnon and the Purple Hornets were first-and-goal on the 6-yard line with 1:28 to go before the half. It was plenty of time for quarterback Alex Kissel to pitch the ball to Dowd who found the goal line and six points. L’Anse had cut the deficit to 21-6 at halftime.

“I thought we played with them very well in that first half,” L’Anse head coach Mark Leaf said. “The effort was outstanding. Our kids came out and played very hard despite the fact that we were missing six starters.”

In the third quarter, the Mountaineers put the game out of reach with 23 points. After the kickoff, they took over and on the third play of the drive Evosevich-Hynes found another hole in the L’Anse defense and went 57 yards down the far side line for the touchdown.

Minutes later, L’Anse fumbled the ball in their zone and Iron Mountain jumped on it. The Mountaineers quickly marched into the red zone. Junior Caleb Burkland dodged tackles and got into the end zone for a score to make it a 37-6 game.

The Mountaineers would go on to score one more touchdown in the third and another one in the fourth before the score clock sounded. Despite the loss, Leaf said he liked what he saw from his players.

I’m very proud of our kids effort,” Leaf said. “They really gave it everything they had. Hats off the Iron Mountain, they are a great football team and they won it fair and square.”