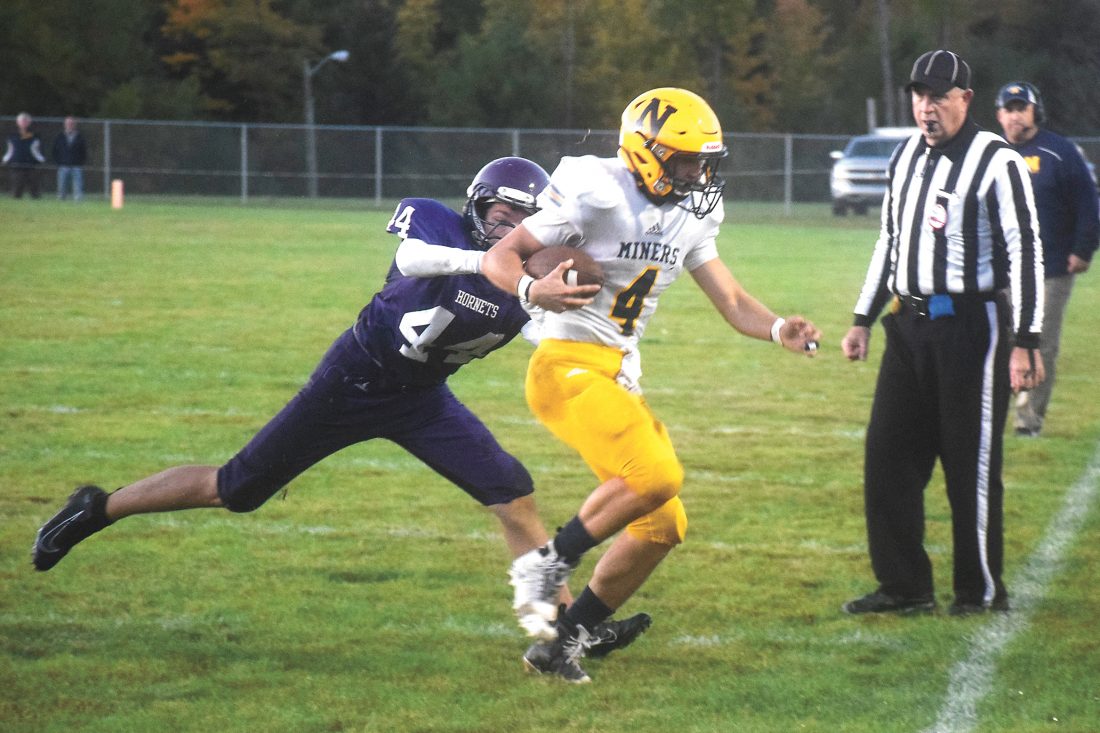 L’ANSE — Purple Hornet’s head coach Mark Leaf knew he had his work cut out for him on the grid iron as the Negaunee Miners came to town on Friday.

However, his workload got only harder just minutes into the game as his senior running back Jonah Dowd went down with an injured rib. They team was also missing sophomore running back Dysean Allen who injured his finger in practice earlier in the week.

It was like we were playing with one arm behind our back,” Leaf said. “With Dowd out it made the job harder, but I thought the kids fought hard and battled till the end.”

The first half was very much a back-and-forth battle as both teams battled it out around midfield. The Miners (4-2) got on the board first in the first quarter with a quarterback sneak from their quarterback Jason Waterman after a 67-yard drive. Kicker Erik Salminen’s extra point was good to make it 7-0.

L’Anse (4-2) got their first points in the second quarter. After taking over in their own territory, junior running back Flash Gagnon took a hand off from his quarterback Presley Rasanen and found a hole and ran for a 65-yard touchdown. The Purple Hornets went for the two-point conversion but were unsuccessful. Gagnon led the Purple Hornets in rushing with 133 yards on 13 carries.

Negaunee went on to score two more times in the second. Waterman had his second of three touchdown runs on the night and just before half time, he connected with Alex Munson for an 8-yard screen pass to make the score 22-6 at the half-way point.

“We hung with them,” Leaf said. “Their touchdown before the half was a big one. That hurt us. Waterman is a very good quarterback. He can beat you in the air and on the ground. He is very athletic.”

Miners head coach Paul Jacobson liked the adjustments that his team made in the second half.

“I don’t think we started well. I didn’t like the fact that we turned the ball over early on,” Jacobson said. “Also some guys missed assignments early on but we were able to shore that up as game went on, and we played more crisp offensively in the second half.”

The Miners dominated time of possession in the third quarter. They received the kick off and put together a 67-yard march to the end zone. It was led by their running back Nash Hillier who had a team-high 120 yards on 24 carries. In that series, the Miners knocked around eight minutes off the clock.

After the kick off, the Purple Hornets took over on their 34-yard line. However after two first downs, new quarterback Alex Kissel threw an interception. Several plays later, Miners running back Lucas Nelson scampered past the goal line to make it 36-6.

The Purple Hornets were able to save face and put together a 61-yard charge down field with time running off the clock in the third period. Kissel connected with receiver Paul Lister-Jacobson for a 15-yard touchdown pass. Jake Laitala’s two -point conversion run was good to make the score 36-14.

“Hats off to Negaunee,” Leaf said. “They played well.”

“It was really a team effort,” Jacobson said of the win. “We were not necessarily on all cylinders the whole night, but we were able to make it happen.”