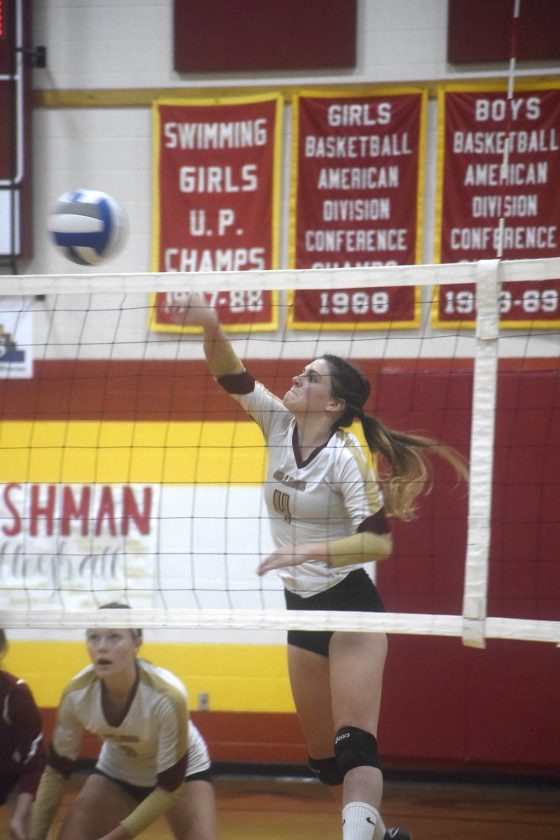 HANCOCK — It was a back and forth battle between the Hancock Bulldogs and the Lake Linden-Hubbell Lakes on all fronts Tuesday night.

It was a big win for Hancock coach Elle Heinonen as she and her girls lost a similar battle earlier in the season to the Lakes.

“This game was a testament to our improvement throughout the season,” she said. “We were able to take them out of their system. We kept them scrambling while we played an aggressive game.”

The Bulldogs fighting spirit took shape in the first set as they came back from a 11-9 deficit and took a 15-10 lead with senior Jordan Pertile at the service line. They pushed their lead to eight points and eventually won 25-16.

“We knew this wasn’t going to be easy,” said LL-H head coach Mandy Perreault. “After the first set, I told the girls their game was off in so many ways.”

Her team heeded her cry as they place the ball better and were quicker on the floor and came out with a 25-11 win.

The Lakes’ strong play continued into the third set as they jumped out to a 9-5 lead. However, with Pertile again at the line the Bulldogs were able to get within two points. That is how the score continued until senior D’Andra Kero had back-to-back kills to tie the score at 18 and put her team back in the lead. The score was then tied at 21, 22, 23, before the Bulldogs were able to clinch the win at 26-24.

The Lakes won the fourth set in a round that saw five ties in the first 13 points. However, some poor hits by the Bulldogs cost them the lead and ultimately the set as they lost 25-19. That set the stage for the tie-breaking final set.

The fifth set was another close one as it was tied at three, seven, nine and 10. Hancock senior Alexandra Huotari put the game away however with a strong service run of five to finish off a 15-10 win.

“We had too many hitting errors,” said Perreault, “and we lacked consistency.”

For the Bulldogs, Marina Kero led the offense with 10 kills. Kyla Colombe followed with nine. Libero Laura Fenton led the defense with 30 digs and Pertile followed her with 22.

“Our hitters stayed aggressive,” Heinonen said. “They swung and found spots on the court and they were relentless in their attack. This was a team effort as everybody played well, and they each moments to lead the team and lift each other up.”

The Bulldogs will look to make it two in a row on Thursday as they face the Houghton Gremlins in the Copper Spike game.

“I was pleased with the overall play,” L’Anse head coach Callie Budweg said. “But despite being all the way through the season, the girls have got to find a way to trust each other all the time no matter what rotation and player is in.”