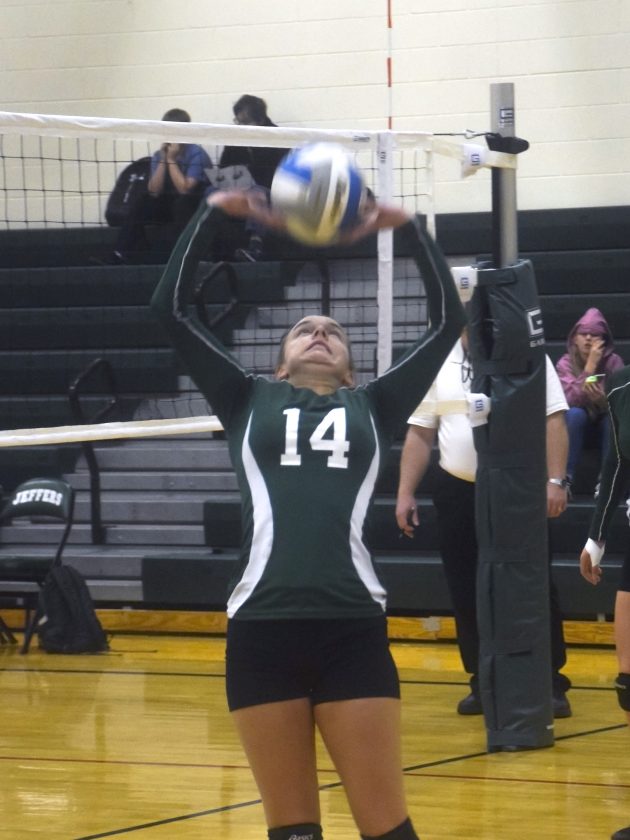 PAINESDALE — The Jeffers Jets continued their winning ways on the volleyball court as they downed the Dollar Bay-Tamarack City Blue 3-0 (25-12, 25-18, 25-12) on Wednesday.

With the win, the Jets moved to 7-2 at roughly the half-way mark on the season.

“I thought we played well,” said head coach Rachel Torp. “I was able to play some of the girls who do not normally get in such as (juniors) Morgan Larson, Eve Anderson and Molly Hill. They all played really well and with that I was able to utilize all of my team.”

In the first set, she was very pleased with the service of senior Marissa Nordstrom.

“She took us on a couple of really long runs, and we were able to capitalize on that,” Torp said.

Nordstrom led the Jets with six aces on the night. She was helped on the offensive by senior Brenna Hill who had six kills.

On the defensive side, junior Maria Johnson led with nine digs. McKenna Harris followed with seven.

The second set was Dollar Bay’s best play of the night. They played some strong defense as they returned a number of hard hit balls from Jeffers back over the net.

In the third set, Jeffers was able to fall back into a good routine of receive, pass and set.

“In the last set, our setter was connecting with all of our hitters which was good to see,” Torp said. “With that we were able to spread around six kills.”

Torp added that with the season half over, the girls are working on some new plays.

“We are also trying to develop a stronger defense and more consistency at the service line,” she explained. “We have too many mis-serves.”

The Jets play Ironwood on Saturday in a tournament.