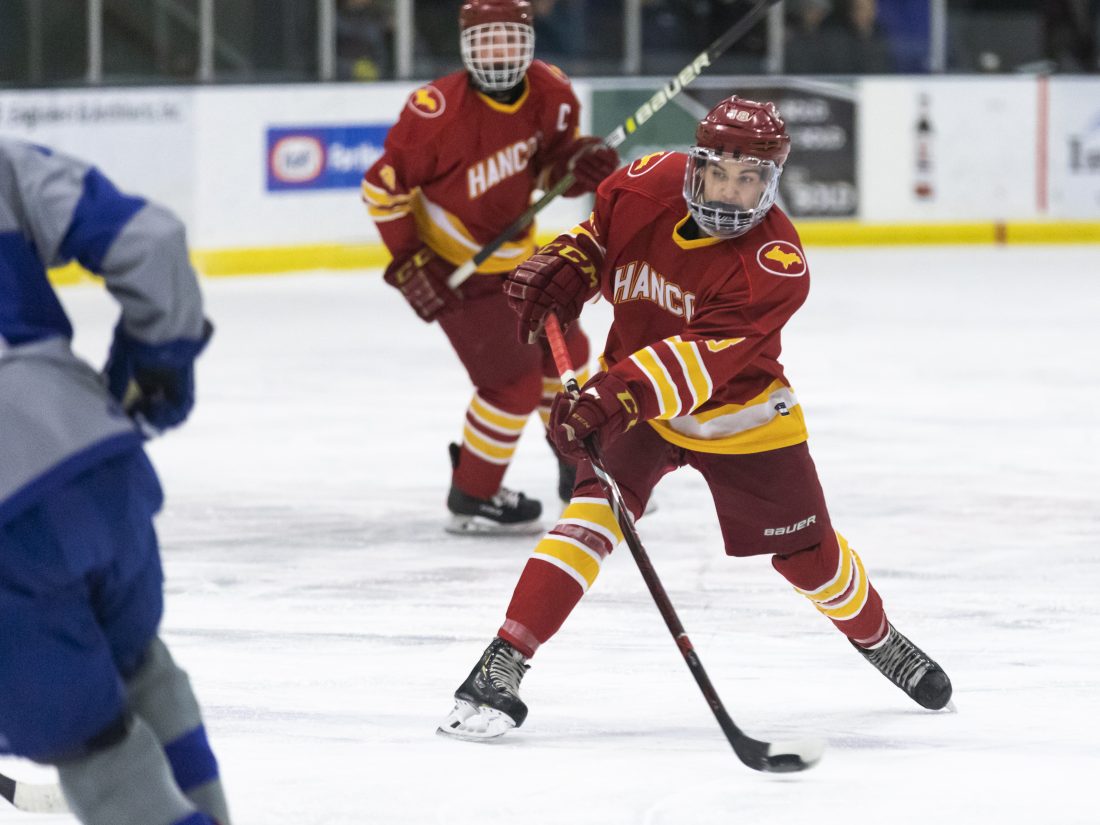 HANCOCK — As Dan Rouleau sits down at Gino’s Restaurant for a pregame meal with his beloved Hancock Bulldogs hockey team, he knows this might be the last time he does so.

As he starts his 25th year as head coach of the Bulldogs, Rouleau feels like the 2019-20 season might be his final one as a head coach.

However, he is not ruling out the chance of coming back, should his squad come together at the right time and make another run at a state title.

Rouleau knows that much of his team learned a lot by getting the chance to play last season and work through a tough high school schedule. With the returns of the Salani brothers and the Anderson brothers, along with Hancock legacies in players like Chad Nordstrom and Bradley Randell, Rouleau has a core group of players who have had a chance to play together for a couple of seasons.

“What we’re looking at of our goaltenders, two sophomores, is we’re hoping by the end of the year, they’re playing like juniors, more or less,” he said.

Issak and Brandon Pietila both saw limited action last season, with Isaak getting into four games and Brandon three. The biggest issue, other than inexperience, facing both of them was their height.

This year, Brandon missed a chunk of practice time with a broken leg suffered during football season. He was finally able to start practicing this past week. The setback gives Isaak a chance to prove he can be a starting goaltender, but Rouleau expects to use both as the season goes along.

“These two kids, if they want playing time, if they want to be the goalie at the end of the year, they both have to go hard,” said Rouleau. “They’re gonna rotate pretty much as Brandon gets healthy.

“That goalie has to prove, at the end of the year, that he’s the man. If he doesn’t, I’ll keep rotating them into the playoffs, if that’s what it takes.”

In front of the Pietilas area group of defenders who learned on the fly last season in Nordstrom, now a sophomore, Paul Lorenzetti, a senior, Randell, a junior, and Easton Sintkowski, a sophomore.

Nordstrom, who started strong last season before hitting the proverbial wall in the second half of the season, has impressed Rouleau thus far in preseason workouts.

“He’s looked really good in practice so far,” Rouleau said. “He handles the puck well, he sees the ice real well. He makes nice passes. His first pass is really nice coming out of the zone.”

Randell and Lorenzetti both can move the puck and play smart in their own end. Rouleau will look to both as the leaders of the back end.

Sintkowski gives the Bulldogs a physical presence, something Rouleau admits he needs in his defense when facing the likes of Calumet or Houghton.

“He had to work on his footwork a little bit more, and he has,” Rouleau said. “He’s got a great shot and he likes to hit, so hopefully we can get that physical game out of him.”

Dominick Pizzi, a freshman, also joins the blue line corps this year. Rouleau is very excited to get Pizzi into the lineup, because he feels the youngster has the makings of a very solid defenseman who can push the pace of the game. His coach feels Pizzi could earn a lot of ice time in his first season.

Up front, senior Colton Salani and his brother Austin, a junior, both look to help lead the Bulldogs. Austin scored 18 goals and 40 points to lead the Bulldogs last year. Colton scored seven goals and 21 points, nine of which came in a six-game span from Jan. 4-22.

The one knock on Austin is how badly he wants to win. Rouleau feels that much of his frustration comes from expecting everyone around him to compete as hard as he does.

“He’s got a great shot,” Rouleau said. “He’s very physical and he’s got a lot of his game that will do well at the next level. He expects the guys around him to be just as good and it’s it’s it’s it’s hard on them sometimes, but it all just boils down to he just wants to win and he’s a he’s a great competitor.”

Petr and Todd Anderson will join Colton Salani on the team’s top line early in the season. Todd, a sophomore, was second on the team in points last season with 10 goals and 23 points. Petr, a senior, was tied for third with 14 goals and 21 points.

“They give you 110% every game,” said Rouleau when asked about the Anderson brothers. “When you’re getting a kid that gives 110%, they’re going to get some of something accomplished. Both Petr and Todd have been nice to have on the team the last couple of years.”

Two new faces could make an impact quickly for the Bulldogs, Mason Mikesch and Calvin Heinonen.

Mikesch is the son of former Hancock standout Jeff Mikesch.

“(He’s a) very big, rangy kid with a great reach,” Rouleau said. “You’re gonna see him on the scoresheet quite a bit.”

Heinonen will start the season alongside Austin Salani and Mikesch. Rouleau feels that he has the talent to be an effective player as soon as he adjusts to the speed of the high school game.

Despite dropping the first two games of the season to Calumet in the Copper Island Classic, Rouleau likes the challenge of playing the Copper Kings right away and then following that up with facing Houghton, Hartland and Traverse City Central over the next three games. He feels his team will learn a lot about themselves by playing a tough first half and should help them figure out what it will take to be competitive come playoff time.

Having been around Hancock hockey for a quarter century, he has also had the chance to see some of his top players, like Tanner Kero, Devin Kero, and Teddy Randell, move on to play college hockey at places like Michigan Tech and Finlandia.

“You go back as far as Tanner, you know, Tanner opened up a lot of doors for for these kids nowadays,” Rouleau said. “They get looked at. They see a player like Tanner Kero up there and they want to come on come up and see who else plays with them.

“It’s great for these kids to have some role models to look up to. What better a kid than Tanner Lero, not only on the ice, but a great role model off the ice.”